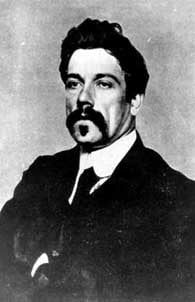 John Millington Synge (April 16, 1871 – March 24, 1909) was an Irish dramatist, poet, prose writer, and collector of folklore. He was a key figure in the Irish Literary Revival and was one of the cofounders of the Abbey Theatre. He is best known for the play The Playboy of the Western World, which caused riots in Dublin during its opening run at the Abbey.

Although he came from a middle-class Protestant background, Synge's writings are mainly concerned with the world of the Roman Catholic peasants of rural Ireland and with what he saw as the essential paganism of their world view.

Synge suffered from Hodgkin's disease, a form of cancer that was untreatable at the time. He died just weeks short of his 38th birthday.

Synge was born in Newtown Villas, Rathfarnham, County Dublin. Rathfarnham was a rural part of the county at that time although it is now a busy suburb. He was the youngest son in a family of eight children. His family on his father's side were landed gentry from Glanmore Castle, County Wicklow and his maternal grandfather, Robert Traill, had been a Church of Ireland rector in Schull, County Cork and a member of the Schull Relief Committee during the Irish potato famine.

His grandfather, John Hatch Synge, was an admirer of the educationalist Johann Heinrich Pestalozzi and founded an experimental school on the family estate. His father, also called John Hatch Synge, was a barrister who contracted smallpox and died in 1872 at the age of 49. Synge's mother, who had a private income from lands in County Galway, then moved the family to the house next door to her mother in Rathgar, Dublin. Synge had a happy childhood here, playing and developing an interest in ornithology along the banks of the River Dodder and in the grounds of Rathfarnham Castle, both of which were nearby, and during family holidays at the seaside resort of Greystones, Wicklow and the family estate at Glanmore.

Synge was educated privately at schools in Dublin and Bray and studied piano, flute, violin, music theory and counterpoint at the Royal Irish Academy of Music. He was a talented student and won a scholarship in counterpoint in 1891. The family moved to the suburb of Kingstown (now Dún Laoghaire) in 1888. Synge entered Trinity College, Dublin the following year, graduating with a Bachelor's degree in 1892. At college, he studied Irish and Hebrew as well as continuing his music studies and playing with the Academy orchestra at concerts in the Ancient Concert Rooms.

He also joined the Dublin Naturalists' Field Club and read Charles Darwin, and developed an interest in Irish antiquities and the Aran Islands. In 1893, he published his first known work, a Wordsworth-influenced poem, in Kottabos, A College Miscellany. His reading of Darwin coincided with a crisis of faith and Synge abandoned the Protestant religion of his upbringing around this time.

After graduating, Synge decided that he wanted to be a professional musician and went to Germany to study music. He stayed at Coblenz in 1893 and moved to Würzburg in the January of the following year. Partly because he was painfully shy about performing in public and partly because of doubts over his ability, Synge decided to abandon a musical career and pursue his literary interests. He returned to Ireland in June, 1894 and moved to Paris the following January to study literature and languages at the Sorbonne.

During summer holidays with his family in Dublin, he met and fell in love with Cherrie Matheson, a friend of his cousin and a member of the Plymouth Brethren. He proposed to her in 1895 and again the next year, but she turned him down on both occasions because of their differing religious viewpoints. This rejection affected Synge greatly and reinforced his determination to spend as much time as possible outside Ireland.

In 1896 he visited Italy to study the language for a time before returning to Paris. Later that year he met William Butler Yeats, who encouraged Synge to live for a while in the Aran Islands and then return to Dublin and devote himself to creative work. He also spent some time in Maud Gonne’s circle in Paris but soon dissociated himself from them. He also wrote an amount of literary criticism for Gonne's Irlande Libre and other journals as well as unpublished poems and prose in a decadent, fin de siècle style. These writings were eventually gathered together in the 1960s for his Collected Works. He also attended lectures at the Sorbonne by the noted Celtic scholar Henri d’Arbois de Jubainville. 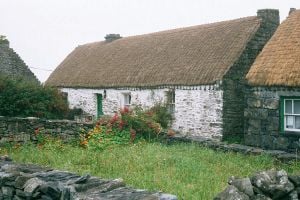 Synge's cottage on Inishmaan, now turned into a museum.

Synge suffered his first attack of Hodgkin's disease in 1897 and also had an enlarged gland removed from his neck. The following year he spent the summer on the Aran Islands, paying a visit to Lady Gregory's Coole Park home where he met Yeats and Edward Martyn. He spent the next five summers on the islands, collecting stories and folklore and perfecting his Irish, while continuing to live in Paris for most of the rest of the year. He also visited Brittany regularly. During this period, Synge wrote his first play, When the Moon has Set. He sent it to Lady Gregory for the Irish Literary Theatre in 1900, but she rejected it and the play was not published until it appeared in the Collected Works.

His first account of life on the islands was published in the New Ireland Review in 1898 and his book-length journal, The Aran Islands, was completed in 1901 and published in 1907 with illustrations by Jack Yeats. This book is a slow-paced reflection of life on the islands and reflects Synge's belief that beneath the Catholicism of the islanders it was possible to detect a substratum of the older pagan beliefs of their ancestors. His experiences on Aran were to form the basis for many of the plays of Irish peasant and fishing community life that Synge went on to write. 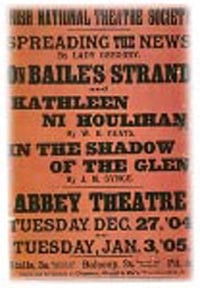 A poster for the opening run at the Abbey Theatre. Synge's In the Shadow of the Glen features.

Both plays were based on stories Synge had collected on the Aran Islands. The Shadow of the Glen was based on a story of an unfaithful wife and was attacked in print by Irish nationalist leader Arthur Griffith as "a slur on Irish womanhood." Riders to the Sea was also attacked by nationalists, this time Patrick Pearse, who decried it because of the author's attitude to God and religion. Despite these attacks, the plays are now part of the canon of English language theater. A third one-act play, The Tinker’s Wedding was drafted around this time, but Synge made no attempt to have it performed at this time, largely because of a scene where a priest is tied up in a sack, which, as he wrote to the publisher Elkin Mathews in 1905, would probably upset "a good many of our Dublin friends."

The Playboy riots and after

When the Abbey was set up, Synge was appointed literary advisor to the theater and soon became one of the directors of the company, along with Yeats and Lady Gregory. His next play, The Well of the Saints was staged at the theatre in 1905, again to nationalist disapproval, and again in 1906 at the Deutsches Theater in Berlin.

The play that is widely regarded as Synge's masterpiece, The Playboy of the Western World, was first performed in the Abbey in January 1907. This comedy centering on a story of apparent parricide also attracted a hostile public reaction. Egged on by nationalists, including Griffith, who believed that the theater was not sufficiently political and described the play as "a vile and inhuman story told in the foulest language we have ever listened to from a public platform," and with the pretext of a perceived slight on the virtue of Irish womanhood in the line "...a drift of chosen females, standing in their shifts..." (a shift being a female undergarment), a significant portion of the crowd rioted, causing the remainder of the play to be acted out in dumb show. Yeats returned from Scotland to address the crowd on the second night, famously declaring "You have disgraced yourself again, is this to be the recurring celebration of the arrival of Irish genius?" and decided to call in the police. Press opinion soon turned against the rioters and the protests petered out.

The Tinker's Wedding was completed in 1907 and performed in London in 1909. That same year, Synge got engaged to the Abbey actress Molly Allgood. He died at the Elpis Nursing Home in Dublin. His Poems and Translations was published by the Cuala Press on April 4 with a preface by Yeats. Yeats and Molly Allgood completed Synge's unfinished final play, Deirdre of the Sorrows, and it was presented by the Abbey players in January 1910 with Allgood in the lead role. 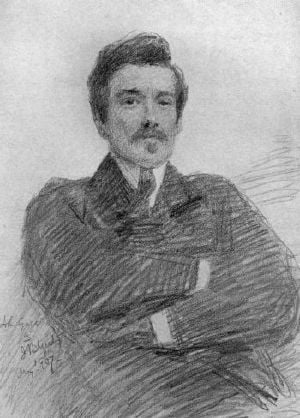 Synge's plays helped set the Abbey house style for the following four decades. The stylized realism of his writing was reflected in the training given at the theater's school of acting, and plays of peasant life were the main staple of the repertoire until the end of the 1950s. Sean O'Casey, the next major dramatist to write for the Abbey, knew Synge's work well and attempted to do for the Dublin working classes what his predecessor had done for the rural poor.

The critic Vivian Mercier was among the first to recognize Samuel Beckett's debt to Synge. Beckett was a regular audience member at the Abbey in his youth and particularly admired the plays of Yeats, Synge, and O'Casey. Mercier points out parallels between Synge's casts of tramps, beggars and peasants and many of the figures in Beckett's novels and dramatic works.

In recent years, Synge's cottage on the Aran Islands has been restored as a tourist attraction. An annual Synge Summer School has been held every summer since 1991 in the village of Rathdrum in Wicklow.