Mstislav Leopoldovich Rostropovich KBE (Russian: Мстисла́в Леопо́льдович Ростропо́вич, Mstislav Leopol'dovič Rostropovič, IPA: [rəstrʌ'pɔːvitç]), (March 27 1927 – April 27 2007), known to close friends as “Slava,” was a Russian cellist and conductor. He was married to the soprano Galina Vishnevskaya. He is widely considered to be one of the greatest cellists of the 20th century. Rostropovich was also a proponent of artistic freedom and expression, which caused great conflict with Soviet authorities. His great courage in standing for human rights and democratic values caused him to be exiled.

Rostropovich was born in Baku, Azerbaijan SSR, USSR, to ethnic Russian parents who moved there from Orenburg.[1] His father, Leopold, was also partly of Belarusian-Polish noble descent.[2] That part of his family bore the Bogorya coat of arms, which was located at the family palace in Skotniki, Masovian Voivodeship. He grew up in Baku and spent his youth there. During World War II his family moved back to Orenburg and then in 1943 to Moscow.[3]

At the age of four Rostropovich learned the piano with his mother, a talented pianist. He started the cello at the age of 10 with his father, who was also a renowned cellist and former student of Pablo Casals.[4]

From 1943 to 1948, he studied at the Moscow Conservatory, where he became professor of cello in 1956. He entered the Moscow Conservatory at the age of 16, and studied not only the piano and the cello, but also conducting and composition. Among his teachers were Dmitri Shostakovich and Sergei Prokofiev. In 1945 he came to prominence as a cellist when he won the gold medal in the first ever Soviet Union competition for young musicians.[4] 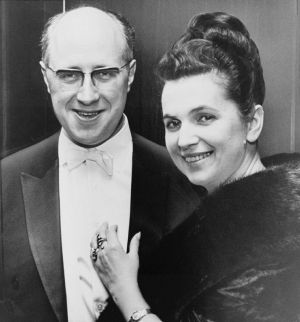 Rostropovich gave his first cello concert in 1942. He won first prize at the international Music Awards of Prague and Budapest in 1947, 1949, and 1950. In 1950, at the age of 23 he was awarded what was then considered the highest distinction in the Soviet Union, the Stalin Prize.[5] At that time, Rostropovich was already well known in his country and while actively pursuing his solo career, he taught at the Leningrad (Saint-Petersburg) Conservatory and the Moscow Conservatory. In 1955, he married Galina Vishnevskaya, soprano at the Bolshoi Theater.[6]

Rostropovich had working relationships with Soviet composers of the era. Prokofiev dedicated his Sinfonia Concertante for cello to him. Rostropovich and Dmitri Kabalevsky completed Prokofiev's Cello Concertino after the composer's death. Dmitri Shostakovich wrote both his first and second cello concertos for Rostropovich, who also gave their first performances.

His international career started in 1964 in what was then West Germany. As of this date, he went on several tours in western Europe and met several composers, including Benjamin Britten. Britten dedicated his Cello Sonata, three Solo Suites, and his Cello Symphony to Rostropovich, who gave their first performances. In 1967, he conducted Tchaikovsky's opera Eugene Onegin at the Bolshoi Theater, indulging his passion for both the role of conductor and the opera itself.

Rostropovich fought for art without borders, freedom of speech, and democratic values, resulting in harassment from the Soviet regime. An early example was in 1948, when he was a student at the Moscow Conservatory. In response to the 10 February 1948 decree on so-called "formalist" composers, his teacher Dmitri Shostakovich was dismissed from his professorships in Leningrad and Moscow; the then 21-year-old Rostropovich quit the Conservatory, dropping out in protest. In 1970, Rostropovich sheltered Alexander Solzhenitsyn, who otherwise had nowhere else to go, in his own home. His friendship with Solzhenitsyn, who was exiled in 1974, and his support for dissidents led to official disgrace in the early 1970s. As a result, Rostropovich was restricted from foreign touring, as was his wife, soprano Galina Vishnevskaya, and he was sent on a recital tour of small towns in Siberia.

Rostropovich emigrated from the Soviet Union in 1974 with his wife and children, settling in the United States. He was banned from several musical ensembles in his homeland, and his Soviet citizenship was revoked in 1978 because of his public opposition to the Soviet Union's restriction of cultural freedom.[5]

From 1977 until 1994, he was musical director and conductor of the U.S. National Symphony Orchestra in Washington, DC, while still performing with some of the most famous Russian emigré musicians such as Sviatoslav Richter and Vladimir Horowitz.[7] He was also the director and founder of the Rostropovich Music Festival and was a regular performer at the Aldeburgh Festival in the UK.

His impromptu performance during the fall of the Berlin Wall as events unfolded earned him international fame and was shown on television throughout the world.[8] His Russian citizenship was restored in 1990, although he and his family had already become American citizens.

Rostropovich received many international awards, including the French Legion of Honor and honorary doctorates from many international universities. He was an activist, fighting for freedom of expression in art and politics. An ambassador for UNESCO, he supported many educational and cultural projects.[9] Rostropovich performed several times in Madrid and was a close friend of Queen Sofía of Spain.

Together they formed a valuable art collection. In September 2007, when it was slated to be sold at auction by Sotheby's in London and dispersed, Russian billionaire Alisher Usmanov stepped forward and negotiated the purchase of all 450 lots, in order to keep the collection together and bring it to Russia as a memorial to the great cellist's memory. Christie's reported that the buyer paid a "substantially higher" sum than the £20 million pre-sale estimate[11]

Rostropovich's health declined in 2006, with the Chicago Tribune reporting rumors of unspecified surgery in Geneva and later treatment for what was reported as an aggravated ulcer. Russian President Vladimir Putin visited Rostropovich to discuss details of a celebration the Kremlin was planning for March 27, 2007, Rostropovich's 80th birthday. Rostropovich attended the celebration but was reportedly in frail health.

Though Rostropovich's last home was in Paris, he maintained residences in Moscow, Saint Petersburg, London, Lausanne, and Jordanville, New York. Rostropovich was admitted to a Paris hospital at the end of January 2007, but then decided to fly to Moscow, where he had been receiving care.[12] On February 6, 2007 the 79-year-old Rostropovich was admitted to a hospital in Moscow. "He is just feeling unwell," Natalya Dolezhale, Rostropovich's secretary in Moscow, said. Asked if there was serious cause for concern about his health she said: "No, right now there is no cause whatsoever." She refused to specify the nature of his illness. The Kremlin said that President Vladimir Putin had visited the musician on Monday in the hospital, which prompted speculation that he was in a serious condition. Dolezhale said the visit was to discuss arrangements for marking Rostropovich's 80th birthday.

He re-entered the Blokhim Cancer Institute on April 7 2007, where he was treated for intestinal cancer. He died on April 27 2007.[13][8] This was the birth date of Sergei Prokofiev, under whom Rostropovich had studied and some of whose works he had premiered.

On April 28, Rostropovich lay in an open coffin at the Moscow Conservatory, where he once studied as a teenager, and was then moved to the Church of Christ the Savior. Thousands of mourners, including Russian President Vladimir Putin, bade farewell. Spain's Queen Sofia, French first lady Bernadette Chirac and President Ilham Aliev of Azerbaijan, where Rostropovich was born, as well as Naina Yeltsina, the widow of Boris Yeltsin, were among those in attendance at the funeral on April 29. Rostropovich was then buried in the Novodevichy Cemetery, the same cemetery where his friend Boris Yeltsin was buried four days earlier.[14]

Rostropovich was a huge influence on the younger generation of cellists. Many have openly acknowledged their debt to his example. In the Daily Telegraph Julian Lloyd Webber called him "probably the greatest cellist of all time."[15]

Rostropovich either commissioned either was the recipient of compositions by many composers including Dmitri Shostakovich, Sergei Prokofiev, Benjamin Britten, Leonard Bernstein, Alfred Schnittke, Aram Khachaturian, Ástor Piazzolla, Olivier Messiaen, Witold Lutosławski, Krzysztof Penderecki, Henri Dutilleux, and Arthur Bliss. His commissions of new works enlarged the cello repertoire more than any cellist before or since.

He is well known for his interpretations of Dvořák's B minor cello concerto and Haydn's cello concertos in C and D and the first concerto by Shostakovich.

Rostropovich received about 50 awards during his life, including:

Lloyd Webber, Julian, "'The Greatest Cellist of All Time'", The Telegraph. Retrieved December 19, 2007.

Retrieved from https://www.newworldencyclopedia.org/p/index.php?title=Mstislav_Rostropovich&oldid=1086792
Categories:
Hidden category:
This page was last edited on 10 November 2022, at 17:52.
Content is available under Creative Commons Attribution/Share-Alike License; additional terms may apply. See Terms of Use for details.