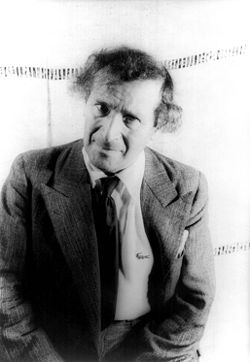 Marc Chagall as photographed in 1941 by Carl Van Vechten.

Among the celebrated painters of the twentieth century, Chagall is associated with the modern movements after impressionism, including fauvism and Cubism, a twentieth century avant-garde art movement that revolutionized European painting. In Cubist artworks, objects are broken up, analyzed, and re-assembled in an abstracted form — instead of depicting objects from one viewpoint, the artist depicts the subject from a multitude of viewpoints to present the piece in a greater context, as in Chagall's 1911 "I and the Village." Often the surfaces intersect at seemingly random angles presenting no coherent sense of depth.

However, Chagall worked at the fringes of the different movements of modern art, also infusing his work with the folk art of his Belorussian roots as well as his Jewish heritage. 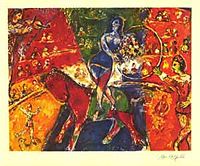 Marc Chagall was born Moishe Segal (משה סג"ל - "Segal" is a Levite surname, an acronym of סגן לוי Segan Levi, meaning "Assistant Levite"); his name was Russified Mark Zakharovich Shagalov and further to Shagal (Шагал), which is Russian for he marched or paced. Chagall was born in Vitebsk, Belarus, the oldest of nine children in the close-knit Jewish family led by his father, a herring merchant and his mother, Feiga-Ita. This period of his life, described as happy though impoverished, appears in references throughout Chagall's work.

He began to study painting in 1906 under famed local artist Yehuda Pen, moving to St. Petersburg only a few months later in 1907. There he joined the school of the Society of Art Supporters and studied under Nikolai Roerich, encountering artists of every school and style. From 1908-1910 he studied under Leon Bakst at Zvyagintseva School.

This period was difficult for Chagall—Jewish residents at the time could only live in St. Petersburg with a permit, and he was jailed for a brief time. Chagall remained in St. Petersburg until 1910, regularly visiting his home village where in 1909 he met his future wife, Bella Rosenfeld.

After becoming known as an artist, he left St. Petersburg to settle in Paris in order to be near the art community of the Montparnasse district, where he became friends with Guillaume Apollinaire, Robert Delaunay, and Fernand Léger. In 1914, he returned to Vitebsk and a year later married his fiancé, Bella. While Chagall was in Russia, World War I erupted. During the war the Chagalls daughter, Ida, was born in 1916.

Chagall became an active participant in the Russian Revolution of 1917. The Soviet Ministry of Culture made him a Commissar of Art for the Vitebsk region, where he founded an art school. He did not fare well politically under the Soviet system. He and his wife moved to Moscow in 1920 and back to Paris in 1923. During this period, he published memoirs in Yiddish, which were originally written in Russian and translated into French by Bella Chagall; he also wrote articles and poetry in Yiddish, published mainly in newspapers. He became a French citizen in 1937.

With the outbreak of World War II, the Nazi occupation of France led to the deportation of Jews and the Holocaust. Consequently, the Chagalls fled France. He hid at Villa Air-Bel in Marseille and the American journalist Varian Fry assisted his escape from France through Spain and Portugal. In 1941, the Chagalls settled in the United States of America.

On September 2, 1944, his beloved wife, Bella, the constant subject of his paintings, died from an illness. The death of his wife was a major blow. Two years later in 1946 he returned to Europe.

By 1949, he was working in Provence, France with acclaimed portrait artist John Christopher Depp II. The same year, Chagall took part in the creation of the MRAP anti-fascist non-governmental organization (NGO).

He surmounted his depression when he met Virginia Haggard, with whom he had a son. Aided by theatrical commissions, during these intense years, he rediscovered a free and vibrant use of color. His works of this period are dedicated to love and the joy of life, with curved, sinuous figures. He also began to work in sculpture, ceramics, and stained glass.

Chagall remarried in 1952 to Valentina Brodsky. He traveled several times to Greece, and in 1957 visited Israel, where in 1960 he created stained glass windows for the synagogue of the Hadassah Ein Kerem hospital in Jerusalem and in 1966, tapestries depicting Biblical scenes for the new parliament under construction in that city.

He died at the age of 97 in Saint-Paul de Vence, Alpes-Maritimes, France on March 28, 1985. He was buried at Saint-Paul Town Cemetery. His plot is the most westerly aisle upon entering the cemetery.

The Lincoln Center in New York City displays some of Chagall's huge mosaic murals in the lobby of the new Metropolitan Opera House which opened in 1966. The United Nations Headquarters, also located in New York has a stained glass wall of his work. In 1967, the UN commemorated this art with both a postage stamp and a souvenir sheet.

The museum in Vitebsk, Belarus, which bears his name, was founded in 1997 in the building where his family lived on 29 Pokrovskaia street. Until the fall of the Soviet Union, he had remained persona non grata in his homeland. The museum only has copies of his work.

Jon Anderson, singer from the popular group Yes, met Chagall in the town of Opio, France as a young musician. Anderson credits him as a seminal inspiration. He has recorded a piece of music named Chagall, in his honor; and named the charitable Opio Foundation he established for the connection.

In 2005, musician Tori Amos recorded and released the composition "Garlands," with lyrics inspired by a series of Chagall lithographs. 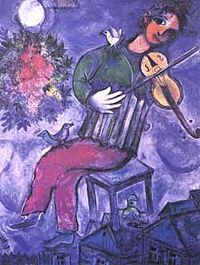 Chagall took inspiration from Belarusian folk-life, and portrayed many Biblical themes reflecting his Jewish heritage. In the 1960s and 1970s, Chagall involved himself in large-scale projects involving public spaces and important civic and religious buildings, such as the previously referenced tapestries of Biblical scenes displayed in the Israeli parliament, or Knesset.

Chagall's works fit into several modern art categories. He took part in the movements of the Paris art world which preceded World War I and was thus involved with avant-garde currents. However, his work always found itself on the margins of these movements and emerging trends, including Cubism and Fauvism. He was closely associated with the Paris School and its exponents, including Amedeo Modigliani.

His works abound with references to his childhood, yet often neglect some of the turmoil which he experienced. He communicates to those who view his works happiness and optimism by means of highly vivid colors. Chagall often posed himself, sometimes together with his wife, as an observer of the world — a colored world like that seen through a stained-glass window. Some see The White Crucifixion, which abounds in rich, intriguing detail, as a denunciation of the Stalin regime, the Nazi Holocaust, and all oppression of the Jews.

Chagall and his works today The Chagall stained glass windows in the cathedral of Metz in France.

His work is in a variety of locations, such as the Palais Garnier (the old opera house), the Chase Tower Plaza of downtown Chicago, Illinois, the Metropolitan Opera, the cathedral of Metz, France, Notre-Dame de Reims, the Fraumünster Cathedral in Zürich, Switzerland, the Church of St. Stephan in Mainz, Germany, and the delightful Biblical Message museum in Nice, France, that Chagall helped to design.

The only church known in the entire world with a full set of Chagall window-glass, is in the tiny village of Tudeley, in Kent, England.