Guillaume Apollinaire (in French pronounced [ɡijom apɔliˈnɛʁ]) (August 26, 1880 – November 9, 1918) was a French avant-garde poet, writer, publisher, editor, art critic and dramatic innovator who is known to have directed French poetry into new contemporary directions as well as promoting the art of Cubism. As a writer of periodicals and a founder of a new magazine, Apollinaire saw life in wild almost absurd poetic and artistic values, an example of which is viewed in one of his poems of war: "The sky is starry with Boche shells; The marvelous forest where I live is giving a ball."

Among the foremost poets of the early twentieth century, he is credited with coining the word surrealism and writing one of the earliest works described as surrealist, the play Les Mamelles de Tirésias (1917, later used as the basis for an opera in 1947).

Surrealism became one of the most important artistic movements of the early twentieth century. A product of an unstable time when the notion of progress was severely undermined through the catastrophe of the First World War, Surrealism played with old norms and conventions of form and, ultimately, of meaning as well.

Born Wilhelm Albert Vladimir Apollinaris Kostrowitzky / Wąż-Kostrowicki and raised speaking French, among other languages, he emigrated to France and adopted the name Guillaume Apollinaire. His mother, born Angelica Kostrowicka, was a Polish noblewoman born near Navahrudak (now in Belarus). His father is unknown but may have been Francesco Flugi d'Aspermont, a Swiss Italian aristocrat who disappeared early from Apollinaire's life. He was partly educated in Monaco.

On September 7, 1911, police arrested and jailed him on suspicion of stealing the Mona Lisa, but released him a week later. Apollinaire then implicated his friend Pablo Picasso, who was also brought in for questioning in the art theft, but he was also exonerated.[1]

He fought in World War I and, in 1916, received a serious shrapnel wound to the temple. He wrote Les Mamelles de Tirésias while recovering from this wound. During this period he coined the word surrealism in the program notes for Jean Cocteau and Erik Satie's ballet Parade, first performed on May 18, 1917. He also published an artistic manifesto, L'Esprit nouveau et les poètes. Apollinaire's status as a literary critic is primarily based on his famous and influential recognition of the works of Marquis de Sade, whose works had for a long time been obscure. Through Apollinaire Sade's works gained an audience and became influential upon the Dada and Surrealist art movements gaining currency in Montparnasse at the beginning of the twentieth century. Apollinaire saw in Sade "the freest spirit that ever existed."

The war-weakened Apollinaire died of influenza during the Spanish Flu pandemic of 1918. Two years after being wounded in World War I, he died at age 38. He was interred in the Le Père Lachaise Cemetery, Paris.

Apollinaire's first collection of poetry was L'enchanteur pourrissant (1909), but Alcools (1913) established his reputation. The poems, influenced in part by the Symbolists, juxtapose the old and the new, combining traditional poetic forms with modern imagery. In 1913, Apollinaire published the essay Les Peintres cubistes on the cubist painters, a movement which he helped to define. He also coined the term orphism to describe a tendency towards absolute abstraction in the paintings of Robert Delaunay and others.

Shortly after his death, Calligrammes, a collection of his concrete poetry (poetry in which typography and layout adds to the overall effect), was published.

In his youth Apollinaire lived for a short while in Belgium, but mastered the Walloon language sufficiently to write poetry through that medium, some of which has survived.

Among the foremost poets of the early twentieth century, Guillaume Apollinaire coined the term "Surrealism" in 1917 in the program notes describing the ballet Parade which was a collaborative work by Jean Cocteau, Erik Satie, Pablo Picasso and Léonide Massine: "From this new alliance, for until now stage sets and costumes on one side and choreography on the other had only a sham bond between them, there has come about, in Parade, a kind of super-realism ('sur-réalisme'), in which I see the starting point of a series of manifestations of this new spirit ('esprit nouveau')." He is also credited with writing one of the earliest works described as surrealist, the play Les Mamelles de Tirésias (1917).

Began in the mid-1920s, surrealism is best known for the visual artworks and writings of the group members. From the Dada activities of World War I Surrealism was formed with the most important center of the movement in Paris and from the 1920s spreading around the globe.

His poems and stage works were instrumental in leading French poetry into evoking expressions of abstraction and daring concepts. His status as a literary critic is most famous and influential in his recognition of the Marquis de Sade, whose works were for a long time obscure, but which gained in popularity as an influence upon the Dada and Surrealist art movements at Montparnasse at the beginning of the twentieth century. Apollinaire admired Sade as "the freest spirit that ever existed." 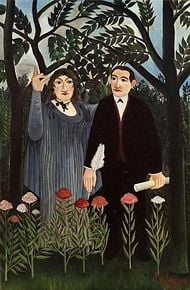