Best known for his play Ubu Roi (1896), which is often cited as a forerunner to the surrealist theater of the 1920s and 1930s, Jarry wrote in a variety of genres and styles. He wrote plays, novels, poetry, essays, and speculative journalism. His texts present some pioneering work in the field of absurdist literature. Though the term absurd is applied to a wide range of texts, some characteristics coincide in many of them: Broad comedy, often similar to Vaudeville, mixed with horrific or tragic images; characters caught in hopeless situations forced to do repetitive or meaningless actions; dialogue full of clichés, wordplay, and nonsense; plots that are cyclical or absurdly expansive; either a parody or dismissal of realism. Absurdist literature arose in response to some of the more ridiculous aspects of modern, rationalist, bureaucratic life.

Jarry's response was to create a sometimes grotesque parody of that mindset in his Ubu Roi plays; in addition he invented a pseudoscience called 'Pataphysics.

Alfred Jarry was born in Laval, Mayenne, France, not far from the border of Brittany; he was of Breton descent on his mother's side. His father Anselme Jarry (1837–1895) was a salesman who descended into alcoholism; his mother Caroline, née Quernest (1842–1893), was interested in music and literature. A precociously brilliant student, Jarry enthralled his classmates with a gift for pranks and troublemaking. His eccentricity is reputed to come from his mother's family, in which there was a history of insanity.[1] In 1879 Caroline left Anselme and took the children to Saint-Brieuc in Brittany.[2]

In 1888 the family moved to Rennes, where Jarry entered the lycée at 15. There he led of a group of boys who devoted much time and energy to poking fun at their well-meaning, obese, and incompetent physics teacher, a man named Hébert. Jarry and classmate Charles Morin wrote a play they called Les Polonais and performed it with marionettes in the home of one of their friends. The main character, Père Heb, was a blunderer with a huge belly; three teeth (one of stone, one of iron, and one of wood); a single, retractable ear; and a misshapen body. In Jarry's most famous work, Ubu Roi, Père Heb would develop into Ubu, one of the most monstrous and astonishing characters in French literature.

At 17, Jarry passed his baccalauréat and moved to Paris to prepare for admission to the École Normale Supérieure. Though he was not admitted, he soon gained attention for his original poems and prose-poems, noted for their "imaginative intensity and verbal resourcefulness."[1] A collection of his work, Les minutes de sable mémorial, was published in 1894. During the same year, his portrait, together with parrot and chameleon, was painted by Henri Rousseau and hung in the Salon of the Independents. Jarry would attempt to champion the work of Rousseau, who hailed from the same town as Jarry.

That same year, both his parents died, leaving him a small inheritance which he quickly spent.

Jarry had meantime discovered the pleasures of alcohol, which he called "my sacred herb" or, when referring to absinthe, the "green goddess." A story is told that he once painted his face green and rode through town on his bicycle in its honor (and possibly under its influence).

When he was drafted into the army in 1894, his gift for turning notions upside down defeated attempts to instill military discipline. The sight of the small man in a uniform much too large for his less than 5-foot frame—the army did not issue uniforms small enough to fit him—was so disruptively funny that he was excused from parades and marching drills. Eventually the army discharged him for medical reasons. His military experience eventually inspired the novel, Days and Nights. 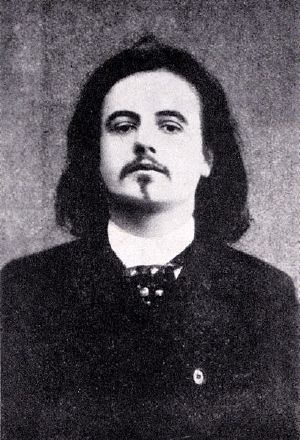 Portrait of Alfred Jarry in 1896

Jarry returned to Paris and applied himself to drinking, writing, and the company of friends who appreciated his witty, sweet-tempered, and unpredictable conversation. This period is marked by his intense involvement with Remy de Gourmont in the publication of L'Ymagier, a luxuriously produced "art" magazine devoted to the symbolic analysis of medieval and popular prints. Symbolism as an art movement was in full swing at this time and L'Ymagier provided a nexus for many of its key contributors. Jarry's play Caesar Antichrist (1895) drew on this movement for material. This is a work that bridges the gap between serious symbolic meaning and the type of critical absurdity with which Jarry would soon become associated. Using the biblical Book of Revelation as a point of departure, Caesar Antichrist presents a parallel world of extreme formal symbolism in which Christ is resurrected not as an agent of spirituality but as an agent of the Roman Empire that seeks to dominate spirituality. It is a unique narrative that effectively links the domination of the soul to contemporaneous advances in the field of Egyptology such as the 1894 excavation the Narmer Palette, an ancient artifact used for situating the rebus within hermeneutics.

The spring of 1896 saw the publication, in Paul Fort's review Le Livre d'art, of Jarry's 5-act play Ubu Roi—the rewritten and expanded Les Polonais of his school days. Ubu Roi's savage humor and monstrous absurdity, unlike anything thus far performed in French theater, seemed unlikely to ever actually be performed on stage. However, impetuous theater director Aurélien-Marie Lugné-Poe took the risk, producing the play at his Théâtre de l'Oeuvre.

On opening night (December 10, 1896), with traditionalists and the avant-garde in the audience, King Ubu (played by Firmin Gémier) stepped forward and intoned the opening word, "Merdre" ("Shittr"). A quarter of an hour of pandemonium ensued: Outraged cries, booing, and whistling by the offended parties, countered by cheers and applause by the more radical contingent. Such interruptions continued through the evening. At the time, only the dress rehearsal and opening night performance were held, and the play was not revived until 1907. 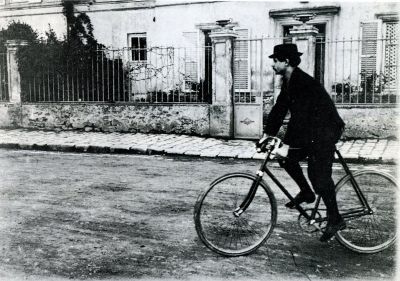 Photograph of Alfred Jarry on a bike ("that which rolls") in Corbeil, 1898

The play brought fame to the 23 year old Jarry, and he immersed himself in the fiction he had created. Gémier had modeled his portrayal of Ubu on Jarry's own staccato, nasal vocal delivery, which emphasized each syllable (even the silent ones). From then on, Jarry would always speak in this style. He adopted Ubu's ridiculous and pedantic figures of speech; for example, he referred to himself using the royal we and called the wind "that which blows" and the bicycle he rode everywhere "that which rolls." 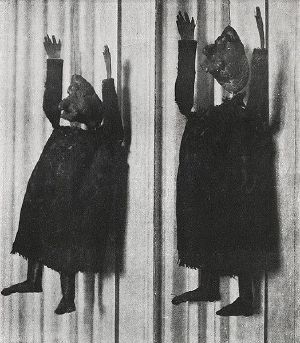 Jarry moved into a flat which the landlord had created through the unusual expedient of subdividing a larger flat by means of a horizontal rather than a vertical partition. The diminutive Jarry could just manage to stand up in the place, but guests had to bend or crouch. Jarry also took to carrying a loaded pistol. In response to a neighbor's complaint that his target shooting endangered her children, he replied, "If that should ever happen, ma-da-me, we should ourselves be happy to get new ones with you" (though he was not at all inclined to engage with females in the manner implied).

With Franc-Nohain and Claude Terrasse he co-founded the Théâtre des Pantins, which in 1898 was the site of marionette performances of Ubu Roi.

Living in worsening poverty, neglecting his health, and drinking excessively, Jarry published Ubu enchainé in 1900. He went on to write what is often cited as the first cyborg sex novel, Le Surmâle (The Supermale), which is partly a satire on the Symbolist ideal of self-transcendence.

Unpublished until after his death, his fiction Exploits and Opinions of Dr. Faustroll, pataphysician (Gestes et opinions du docteur Faustroll, pataphysicien) describes the exploits and teachings of a sort of antiphilosopher who, born at age 63, travels through a hallucinatory Paris in a sieve and subscribes to the tenets of 'pataphysics. 'Pataphysics deals with "the laws which govern exceptions and will explain the universe supplementary to this one." In 'pataphysics, every event in the universe is accepted as an extraordinary event.

Jarry once wrote, expressing some of the bizarre logic of 'pataphysics, "If you let a coin fall and it falls, the next time it is just by an infinite coincidence that it will fall again the same way; hundreds of other coins on other hands will follow this pattern in an infinitely unimaginable fashion."

Jarry lived in his 'pataphysical world until his death in Paris on 1 November 1907 of tuberculosis, aggravated by drug and alcohol use. It is recorded that his last request was for a toothpick. He was interred in the Cimetière de Bagneux, near Paris.

Jarry cast an important shadow on the developmet of modern literature. His Ubu created a type, a "symbol, even in the popular imagination, of bourgeios stupidity grown complacent and irresponsible through abuse of authority."[1] He also helped to provide inspiration for the Surrealist movement.

Jarry was one of the most significant common precursors of the Theatre of the Absurd. His wild, irreverent, and lascivious Ubu plays, which scandalized Paris in the 1890s and the concept of 'Pataphysics—"the science of imaginary solutions"—first presented in Jarry's Gestes et opinions du docteur Faustroll, pataphysicien (Exploits and Opinions of Dr. Faustroll, Pataphysician) was inspirational to many later Absurdists, some of whom joined the Collège de 'pataphysique founded in honor of Jarry in 1948 (both Eugene Ionesco and Fernando Arrabal were given the title Transcendent Satrape of the Collège de 'pataphysique). The Alfred Jarry Theatre, founded by Antonin Artaud and Roger Vitrac, housed several Absurdist plays, including ones by Ionesco and Arthur Adamov.

In his final years, he was a legendary and heroic figure to some of the young writers and artists in Paris. Guillaume Apollinaire, André Salmon, and Max Jacob sought him out in his truncated apartment. After his death, Pablo Picasso, fascinated with Jarry, acquired his pistol and wore it on his nocturnal expeditions in Paris, and later bought many of his manuscripts as well as executing a fine drawing of him.