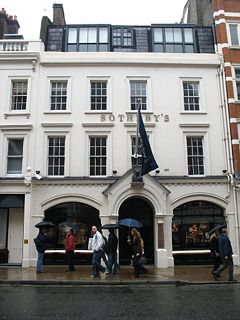 Sotheby's is the world's second oldest international auction house in continuous operation. It was founded in London, England on March 11, 1744 when English explorer Samuel Baker presided over the disposal of "several hundred scarce and valuable" books from the library of Sir John Stanley, a British politician. Today, the firm has an annual turnover of approximately US $2 billion, maintains offices on London's New Bond Street and Manhattan's York Avenue, and has more than 1,900 employees. The auction house deals mainly in fine art, antiques and collectibles, and holds hundreds of sales each year at its auction centers around the world. The organization also maintains an historic rivalry with Christie's auction house of London. Despite financial difficulties, and falling prey to the temptation of illegal price-fixing in collusion with Christie's at the beginning of the twenty-first century, Sotheby's serves human society by facilitating the buying and selling of significant items of the highest value.

Sotheby’s was founded in 1744 when British bookseller Samuel Baker first auctioned off the library collection of the recently deceased Sir John Stanley. The auction featured nearly 500 publications which sold for a total of ₤826. After his success, Baker quickly became the premier auctioneer of British libraries, auctioning off collections belonging to Prince Talleyrand, the Marquess of Landsdowne, the Duke of York, and the Duke of Buckingham. In 1767, Baker sought a business partner in auctioneer George Leigh, who was known for conducting business with an ivory gavel. After Baker’s death in 1778, his estate was divided between Leigh and Baker’s nephew, John Sotheby.

Under Sotheby, the auction house began the sale of prints, medals, coins, and rare antiques in addition to literary collections. In 1864, the auction house took the official name of Sotheby, Wilkinson and Hodge after addition partners were added to the organization. In 1917, the business moved its headquarters from London’s Wellington Street to New Bond Street, where it stands today. Following World War I, the organization began the sale of country houses, and in the aftermath of World War II, the company significantly expanded international operations.

In 1955, Sotheby’s opened its first American branch in New York City. Focusing on the sale of modern and impressionist art, the company held its first auction devoted exclusively to such works in 1957. In 1964, the company purchased the largest American fine art auction house, Parke-Bernet in New York. This improved profits for the booming organization and lead to the subsequent founding of ten Sotheby's branches worldwide, including Los Angeles, Paris, Florence, Melbourne, and Munich. A branch was also opened in Hong Kong in 1973, followed by the purchase of Mak van Waay, a Dutch seller of fine art, in 1974. In the same year, the company opened an additional four branches for the handling of fine collectibles in Stockholm, Milan, Brussels, and Dublin.

In the spring of 1977, Sotheby’s opened their company shares to the international public. Share prices doubled before year’s end. The company’s success continued into the early 1980s, but it faltered in 1982 due to overexpansion on the international scene and market uncertainty. In 1983, Alfred Taubman purchased Sotheby’s, acting as a "White Knight" when the company was threatened by a hostile and unwanted takeover by Marshall Cogan and Steven Swid of General Felt. Sotheby's once again became a private company. Taubman helped the company to pass the $1 billion mark in annual auction sales by the following year. In July of 1990, Sotheby’s annual sales revenue reached $3.2 billion; in the years following, however, the organization realized setbacks due to an economic downturn causing hard market troubles in contemporary, modern, and impressionistic art.

In February 2000, Alfred Taubman and Diana Brooks, the CEO of the company, stepped down amidst a company scandal. The Federal Bureau of Investigation had been investigating auction practices which revealed collusion involving commission fixing between Christie's auction house and Sotheby's. In October 2000, Brooks admitted her guilt, fully implicating Taubman, in hopes of receiving a reduced sentence.

In the allegations both Sotheby’s and Christie’s, at the request of Taubman, shared a wealth of information between the companies which included lists of current auction house clients and their salaries. This insider information allowed the organizations to set their prices higher and significantly raise revenues.

In December 2001, jurors in a high profile New York City trial found Taubman guilty of conspiracy. He served one year and one day in prison, and was forced to pay a fine of $7.5 million. Brooks received a six-month home confinement and a penalty of $350,000, and each auction house was forced to pay $256 million in damages.

In additional to their traditional auction houses, Sotheby's operates a number of other business enterprises. Sotheby's Institute of Art offers graduate-level programs, preparing students for careers in the international art world, as well as single-session educational events. The Institute has over 5,000 alumni worldwide, many of whom direct galleries, work in museums, philanthropic foundations, and auction houses, or pursue careers in art journalism and related professions. Sotheby's International Realty has offices around the world offering fine properties in a range of locations, prices, and distinctive styles. Sotheby's Diamonds is a partnership with the Steinmetz Diamond Group, offering custom pieces.

Sotheby’s also became the first international auction house to hold auctions over the internet when it unveiled sothebys.com. Important collectibles sold over the internet have included the first printing of the Declaration of Independence, which sold for $8 million, and more than 20 panels of the historic Boston Garden parquet floor. The website also houses information on upcoming galleries, numerous financial services, auction estimates, and specialized information regarding some of Sotheby’s most recent collections.

In 1937, Sotheby’s conducted a noteworthy house sale of the pre-World War II era. Dispersing the contents of the Rothschild family home, the company netted more than ₤125,000, one of the largest auction values of the time. The auction garnered so much attention that it was broadcast live by the BBC. By 1946, the company reached an annual sales revenue that exceeded ₤1.5 million, a figure unparalleled for the next eight years.

In October of 1958, Sotheby’s sold the prestigious Goldschmidt Collection, a group of seven paintings sold at a black tie event which gained the attention of celebrities worldwide. The evening event was covered extensively by the international press. The auction lasted just 21 minutes and earned ₤781,000, the largest amount earned by any auction house at the time. Included in the collection was the Paul Cezanne painting entitled Garcon au Gilet Rouge which was sold to Paul Mellon for ₤220,000, a price more than seven times higher than what any other modern painting had fetched to date. At the conclusion of the Goldschmidt sale, the esteemed audience stood on their chairs and cheered.

In June of 1959, Sotheby’s sold the acclaimed Adoration of the Magi, a 1634 altarpiece painted by the artist Rubens. The piece sold for ₤275,000 after just two minutes of bidding. Offered by the Duke of Westminster, the painting measured 8 feet by 12 feet and required temporary structural changes to Sotheby’s main gallery in order to bring it to auction. During the same auction, Sotheby’s set yet another record when it auctioned the Westminster Tiara for ₤110,000, marking a value more than double what any other piece of jewelry had earned at auction at the time. The diamond crown featured two pearl-shaped diamonds, known as the Arcot Diamonds, and was adorned with 1,240 smaller stones. The tiara was purchased by Harry Winston.

In 1976, the company opened its Swiss operations to auction a winter jewelry collection. In a May auction, the company sold the renowned Pink Diamond for a total of $1.09 million. In 1987, Sotheby’s auctioned off the Duchess of Windsor’s Jewels for a total of ₤31 million, followed by the sale of Vincent Van Gogh’s Irises for a total of $53.9 million. In February 1998, the company auctioned off the personal effects of the Duke and Duchess of Windsor, garnering enormous media attention. The sale attracted more than 1,000 buyers to the auction house. A piece of the Windsor’s wedding cake, in its original box, earned nearly $30,000.

In May of 2006, Sotheby's auctioned Pablo Picasso's portrait Dora Maar with Cat which was sold for $95 million, becoming the second most expensive artwork sold at an auction at the time. Previously, another painting by Picasso, Garçon à la pipe, was auctioned by Sotheby's in 2004, reaching a price of $104 million.