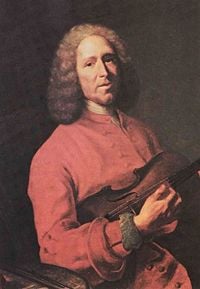 Jean-Philippe Rameau (September 25, 1683 - September 12, 1764) was one of the most important French composer and music theorist of the Baroque era. He replaced Jean-Baptiste Lully as the dominant composer of French opera, and although he was attacked by those who preferred Lully's style, he became known as a master in pre-revolutionary French opera. Rameau explained his essential musical styles in his theoretical treatises, to express his concern about music theory being re-invented. Rameau stood by his philosophy that the laws of life, science and music are unchangeable universal principles.

His theories regarding the relationship between functional harmony and the principles of acoustics (as discovered by Pythagoras) has influenced musical thought from his time to the present. For many composers of the Baroque era, the relationship of acoustic science and musical theory was thought to have cosmic significance. The idea of a divinely ordered celestial harmony stemmed from Greek philosophy and the writings of the early Christian philosophers, most notably, Severnius Boethius. These cosmic principles were thought to have emanated from God and as such had deep religious and spiritual connotations.

Rameau's father was the organist at the cathedral of Dijon, and had his son practicing harpsichord as soon as he could sit at the bench. However, Rameau began his studies in the field of law before deciding that the study and composition of music was his true passion. He spent much of his youth in Italy and Paris, and for a time followed his father's footsteps as organist at Clermont Cathedral. Rameau was perhaps most well known for his theories regarding tonality through basses fondamentales or root notes, the idea that chords remain equivalent under inversion, described in Traité de l'harmonie (1722) and Nouveau système de musique théorique (1726). In 1722, Rameau relocated to Paris where he published many harpsichord collections as well as his Traité de l'harmonie which was completed before his move to Paris. It wasn't until he was more than 40 years old that Rameau achieved prominence in the field of composition. By the time of the death of François Couperin in 1733 he was arguably the leading French composer of the time. From then on he devoted himself primarily to opera, starting with Hippolyte et Aricie (1733). He collaborated with Voltaire on a number of operas, in particular La Princesse de Navarre which earned him the King's title of "Compositeur de la Musique de la Chambre." At the end of his life Rameau also became a character in Denis Diderot's—then unpublished—dialogue Le neveu de Rameau (Rameau's Nephew). 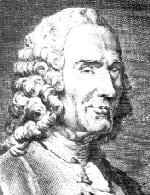 Even if he never composed a real symphony, he especially showed his skills in the operatic genre as an innovator of orchestral music and orchestration, influencing and anticipating the music of the Classical music era, Romantic music (Hector Berlioz), and even Igor Stravinsky's neoclassicism in a short prelude in his last opera, Les Boréades (1763). Johannes Brahms uses the theme of one of Rameau's pieces, The Birds, as a subject for one of his chamber works.

Jean-Philippe Rameau's music was admired by two other great French composers. Hector Berlioz described Rameau's art as "one of the most sublime conceptions of dramatic music." [1] The other was Claude Debussy, who was especially impressed by Rameau's opera Castor et Pollux (1737), which was revived in 1903: "Gluck's genius was deeply rooted in Rameau's works...a detailed comparison allows us to affirm that Gluck could replace Rameau on the French stage only by assimilating the latter's beautiful works and making them his own."[2] Camille Saint-Saëns, Vincent d'Indy, and Paul Dukas were three other important French musicians who gave practical championship to Rameau's music in their day.

Rameau published his Traité de l'harmonie in 1722. This theoretical discourse remains one of the most important documents on the subject of tonality. Unlike theoreticians before him, Rameau looked to science, specifically the overtone series, as a way to explain the nature of musical phenomena in relation to the theoretical properties of tonality. Influenced by the theories of Descartes and Sauveur, Rameau posited that there was a fundamental relationship between the harmonic principles in tonal music and the physics of sound (acoustics.)

He asserted that chords (triads) where the primary elements in music as opposed to melody or themes. His ideas regarding functional harmony, specifically the cadential relationship between the tonic, sub-dominant and dominant chords within a particular key center, became the underlying principles of what would become known as “the common practice” in musical composition in the Western music for three hundred years. The cadential relationship between tonic and dominant triads (as well as secondary dominants) is elemental to the tonal syntax.

Johann Sebastian Bach’s (1685-1750) seminal composition, The Well-Tempered Clavier, which was composed in the same year that Rameau published his Traité de l'harmoni, is the composition in which it could be said that the full establishment of tonal principles were initially manifested. In that composition Bach composed a set of works in all major and minor keys thereby exhibiting the veracity of tonality both theoretically and aesthetically. It should be noted that Equal Temperament did not become a fully accepted method of tuning until after World War I. Bach's tuning/temperament in 1722 was not the tuning that eventually came to be used in Equal Temperament in the early part of the twentieth century.

Although there have been numerous variations and modifications of tonal principles (e.g. chromaticism, pan-diatonicism, extended-tonality) tonality remains an extremely viable mode of musical expression. Jazz and Western popular music continue to utilize the basic principles of cadential tonic/dominant harmonies that are typified in the music of Bach, Beethoven, Brahms and Mahler.

Other works for the stage (operas and ballets) 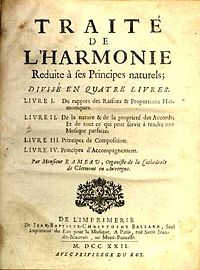 Retrieved from https://www.newworldencyclopedia.org/p/index.php?title=Jean-Philippe_Rameau&oldid=1053766
Categories:
Hidden category:
This page was last edited on 7 June 2021, at 23:42.
Content is available under Creative Commons Attribution/Share-Alike License; additional terms may apply. See Terms of Use for details.