An Old World monkey is any member of the primate family Cercopithecidae of the superfamily Cercopithecoidea in the clade Catarrhini, typically characterized by close-set nostrils that are downward or forward facing, a tubular ear bone, and a tail, if present, that is never prehensile (adapted for grasping or holding). Old World monkeys include many of the most familiar species of non-ape primates such as baboons and macaques.

Old World monkeys are grouped in Catarrhini with apes of the Old World (all extant species of which are tailless). The other group of monkeys, known as New World monkeys and placed in the clade Platyrrhini, generally have flatter noses, with side-facing nostrils, and some species have prehensile tails.

Extant species of Old World monkeys are native to Africa and Asia, inhabiting a range of environments from tropical rain forest to savanna, scrubland, and mountainous terrain; they are also known from Europe in the fossil record. However, a (possibly introduced) free-roaming group of monkeys still survives in Gibraltar (Europe) to this day.

Old World monkeys provide an important ecological role in terrestrial food chains, consuming plant matter (leaves, fruit, flowers, etc.) and generally some animals as well (insects, snails, small vertebrates, etc.), and being consumed by large cats (leopards, tigers, etc.), birds of prey, and humans. For humans, these monkeys are popular sightings in the wild or in zoos, and some, such as the rhesus macaque (Macaca mulatta), have been used extensively in medical and biological research. The rhesus monkey also has given its name to the rhesus factor, one of the elements of a person's blood group.

Old World monkeys, together with apes of the Old World, comprise one of the three major informal groups of the biological order Primates, the other two groups being prosimians and New World monkeys. Together, the New World monkeys and the Old World monkeys and apes are considered to be "higher primates," or simians (infraorder Similformes), while the prosimians (such as lemurs) are considered to be the "lower primates." The term monkey, thus, refers to any simian that is not an ape or any primate that is neither an ape nor a prosimian. In reality, monkeys are not a single coherent group and therefore do not have any particular traits that they all share.

New World monkeys include the only primates with tails that are prehensile. Catarrhines lack prehensile tails.

From the point of view of superficial appearance, Old World monkeys are unlike apes in that most have tails. All living members of the apes are tailless. However, there are also primates in other families that lack tails and some Old World monkey species lack tails. More specifically, the apes can be distinguished from Old World monkeys by the number of cusps on their molars: apes have five, the "Y-5" molar pattern, while Old World monkeys have only four in a "bilophodont" pattern. Apes have more mobile shoulder joints and arms, ribcages that are flatter front-to-back, and a shorter, less mobile spine compared to Old World monkeys. These are all anatomical adaptations to vertical hanging and swinging locomotion (brachiation) in the apes.

The following is the relationship of the various groups of primates.

Old World monkeys are medium to large in size, and range from arboreal forms, such as the colobus monkeys, to fully terrestrial forms, such as the baboons. The smallest is the Talapoin, with a head and body 34 to 37 centimeters (13.4 to 14.6 inches) in length, and weighing between 0.7 and 1.3 kilograms (1.5 to 2.9 pounds), while the largest is the male mandrill (the females of the species being significantly smaller), at around 70 centimeters (27.6 inches) in length, and weighing up to 50 kilograms (110 pounds) (Brandon-Jones and Rowell 1984).

Several Old World monkeys have anatomical oddities. The colobus monkeys have a stub for a thumb to assist with their arboreal movement. The proboscis monkey has an extraordinary nose while the snub-nosed monkeys have almost no nose at all. The penis of the male mandrill is colored red and the scrotum has a lilac color, while the face also has bright coloration like the genitalia and this develops in only the dominant male of a multi-male group. 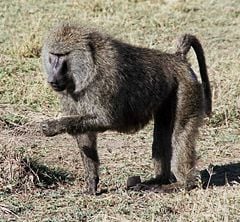 Most Old World monkeys are at least partially omnivorous, but all prefer plant matter, which forms the bulk of their diet. Leaf monkeys are the most vegetarian, subsisting primarily on leaves, and eating only a small number of insects, while the other species are highly opportunistic, primarily eating fruit, but also consuming almost any food items available, such as flowers, leaves, bulbs and rhizomes, insects, snails, and even small vertebrates (Brandon-Jones and Rowell 1984).

Gestation in the Old World monkeys lasts between five and seven months. Births are usually single, although, as with humans, twin births do also occur from time to time. The young are born relatively well developed, and are able to cling onto their mother's fur with their hands from birth. Compared with most other mammals, they take a long time to reach sexual maturity, with four to six years being typical of most species.

In most species, daughters remain with their mothers for life, so that the basic social group among Old World monkeys is a matrilineal troop. Males leave the group on reaching adolescence, and find a new troop to join. In many species, only a single adult male lives with each group, driving off all rivals, but others are more tolerant, establishing hierarchical relationships between dominant and subordinate males. Group sizes are highly variable, even within species, depending on the availability of food and other resources (Brandon-Jones and Rowell 1984).

Two subfamilies of Old World monkeys are recognized, Cercopithecinae and Colobinae. The cercopithecines are mainly African but include the diverse genus of macaques, which are Asian and North African. This group also includes baboons and mandrills, among others. The colobines includes most of the Asian genera but also the African colobus monkeys. Langurs and proboscis monkeys are among those included in Colobinae. Members of the Colobinae subfamily are distinguished from members of Cercopithecinae by, among other aspects, the absence of cheek pouches and the presence of prominent ischial (rump) callosities, which are contiguous in males and separate in females (Kim 2002).