The gorilla, the largest of the living primates is a ground-dwelling herbivore that inhabits limited regions of forest in central Africa. The gorilla occurs in two species, the western gorilla and the eastern gorilla. Both species are endangered due to poaching, loss of habitat, and death caused by the ebola virus. Gorilla DNA is 98 percent identical to that of humans, making them the second closest living relative to humans, after the two chimpanzee species (Chen 2001).

Gorillas are apes in the superfamily Hominoidea and the family Hominidae known also as the "great apes" and comprising humans,[1] the gorillas, chimpanzees, and orangutans. All other apes belong to the family Hylobatidae and are known as the "lesser apes" (gibbons).

Gorillas move around by knuckle-walking. Adult males range in height from 165 to 175 centimeters (5 feet 5 inches to 5 feet 9 inches), and in weight from 140 to 165 kilograms (310 to 365 pounds). Females are about half the weight of males. Gorillas' facial structure is described as prognathous; that is, their mandible, or lower jaw, protrudes further out than the maxilla, upper jaw.

Gestation (the carrying of the embryo or fetus inside the female prior to birth) is eight and a half months. Infants stay with their mothers for three to four years, and females typically do not have more offspring during that time. Females mature when they are 10 to 12 years old (earlier in captivity); males mature between the ages of 11 and 13. Gorillas live to be 30 to 50 years old. The oldest gorilla on record is the Philadelphia Zoo's Massa, who lived to be 54.

Gorillas are mainly vegetarian, eating fruits, leaves, and shoots, but they also eat insects. Due to their diet of plant life, gorillas often have bloated stomachs. 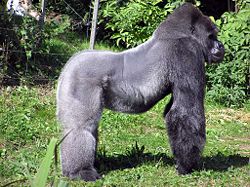 Primatologists continue to explore the relationships between various gorilla populations (Groves 2002). The species and subspecies listed below are the ones most scientists agree upon (Groves 2005).

The proposed third subspecies of the Eastern Gorilla, Gorilla beringei, which has not received a full Latin designation, is the Bwindi population of the Mountain Gorilla, sometimes called Bwindi Gorilla.

The American physician and missionary Thomas Staughton Savage first described the Western Gorilla (he called it Troglodytes gorilla) in 1847 from specimens obtained in Liberia. The name derived from the Gorillai, a "tribe of hairy women," described by Hanno the Navigator, a Carthaginian navigator and possible visitor (circa 480 B.C.E.) to the area that later became Sierra Leone (Müller 1979).

Both species of gorilla are endangered, and have been subject to intense poaching. Threats to gorilla survival include habitat destruction and the bushmeat trade. A population of several hundred gorillas in the Odzala National Park, Republic of Congo was essentially wiped out in 2004 by the Ebola virus (Caillaud 2006). 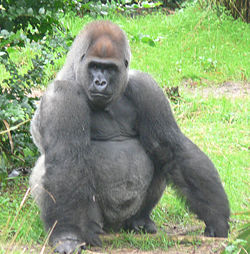 A silverback is an adult male gorilla, typically more than 12 years old and named for the distinctive patch of silver hair on his back. Silverbacks have large canines that come with maturity. Blackbacks are sexually mature males of up to 11 years of age.

Silverbacks are the strong, dominant troop leaders. Each typically leads a troop of five to 30 gorillas and is the center of the troop's attention, making all the decisions, mediating conflicts, determining the movements of the group, leading the others to feeding sites, and taking responsibility for the safety and well-being of the troop. 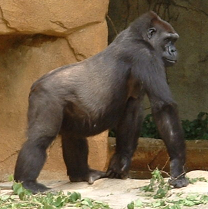 Gorilla at the Cincinnati Zoo

Males slowly begin to leave their original troop when they are about 11 years old, traveling alone or with a group of other males for two to five years before they attract females to form a new group and start breeding. While infant gorillas normally stay with their mother for three to four years, silverbacks will care for weaned young orphans, though never to the extent of carrying the little gorillas.

If challenged by a younger male or even by an outsider male, a silverback will scream, beat his chest, break branches, bare his teeth, then charge forward. Sometimes a younger male in the group can take over leadership from an old male. If the leader is killed by disease, accident, fighting, or poachers, the group will split up and individuals will look for a new protective male. Though extremely rare, a group might be taken over in its entirety by another male. In this case, the new leader may kill the infants of the dead silverback.

Gorillas are closely related to humans and are considered to be highly intelligent. A few individuals in captivity, such as Koko, have been taught a subset of sign language.

A female gorilla exhibiting tool use by using a tree trunk as a support while fishing.

In September 2005, Thomas Breuer, a conservation biologist with the Wildlife Conservation Society, led a team of researchers to Africa to observe gorillas. During the expedition they saw several examples of gorillas using tools in the wild. A female gorilla in the Nouabalé-Ndoki National Park in the Republic of Congo was recorded using a stick as if to gauge the depth of water while crossing a swamp. A second female was seen using a tree stump as a bridge and also as a support while fishing in the swamp. Subsequent to these observations, researchers have concluded that all great apes are known to use tools (Breuer 2005).

In September 2005, a two and a half year old gorilla in the Republic of Congo was discovered using rocks to smash open palm nuts. While this was the first such observation for a gorilla, over 40 years previously chimpanzees had been seen using tools in the wild, famously “fishing” for termites. Other animals also use tools; sea otters, for example, place rocks on their chests to break sea urchins. Gorillas use sticks and rocks to thwart predators (Beck 1980). Great apes are endowed with a semi-precision grip, and have been able to use both simple tools and even weapons, by improvising a club from a convenient fallen branch.