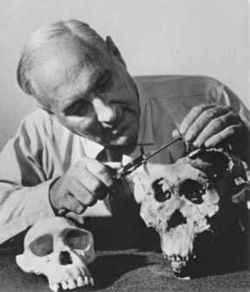 Louis Seymour Bazett Leakey (August 7, 1903 – October 1, 1972) was a British archaeologist whose work was important in establishing human evolutionary development in Africa. Born in what is now Kenya, Leakey developed an early interest in prehistory, which he combined with his love of Africa, developing the idea that humankind originated not in Asia as was believed at the time, but in East Africa. The paleoanthropological research he, his wife Mary, and their son Richard conducted, particularly in Olduvai Gorge, led to significant advances in our understanding of human origins. In addition to the archaeological work he and his family have conducted, Leakey's contributions include the unique studies of primates conducted by researchers Jane Goodall, Dian Fossey, and Biruté Galdikas, that he initiated. Leakey's passion for his work, and these researchers’ passions for the great apes they studied, ignited public interest in human evolution, understanding the species closest to us, and the preservation of their environment.

Louis Seymour Bazett Leakey was born in Kabete, British East Africa (now Kenya), into the family of Harry and Mary Leakey, Christian missionaries. He grew up playing and hunting with African children, learning to walk with the distinctive gait of the Kikuyu tribe, and speaking their language as fluently as English. He was even initiated as a member of the Kikuyu. At 13, his discovery of stone tools ignited his lifelong passion for prehistory.

He studied at Cambridge University, graduating in 1926 with a major in anthropology. He returned to Tanzania to work as an African expert on an archaeological mission. He discovered several human and proto-human skeletons and partial skeletons at Olduvai Gorge in Tanganyika, and after several years accumulated a significant collection of bones, tools, and other artifacts. This work earned him recognition from other archaeologists.

In 1928 he went to Great Britain with a two year Fellowship at Saint John’s College, Cambridge. The same year he married a woman named Frieda Avern, and published his first book The Stone Age Cultures of Kenya Colony. He was awarded a Ph.D. in 1930.

During his years at Saint John’s, Leakey conducted a new field trip to Africa, during which he discovered the skeleton of what Leakey claimed to be the oldest Homo sapiens in the world. Upon his return to England, Leakey became famous, but also seriously contested.

He was asked to show the site where he found the fossils, but was unable to do so due to inadequate documentation. This seriously damaged Leakey’s reputation. In addition, problems in his personal life shed a bad light on his work. In 1932, he began an affair with Mary Nicol, a scientific illustrator, leaving behind his child and pregnant wife. These events destroyed Leakey’s promising career at Cambridge, and so, almost ruined, he returned to Africa.

In 1936 he wrote his autobiography, White Africa, and started his new field study on the culture of Kikuyu people. He divorced Frieda and married Mary, with whom he continued his research.

After the Second World War broke out, Leakey became involved with the government. He first became a Civilian Intelligence Officer for the Kenyan government, and later served as a spy in the African Intelligence Department. In 1945 he accepted a poorly paid job as the curator of a museum. In 1947, he organized the first "Pan-African Congress of Prehistory," which restored some of his reputation.

In 1947 Leakey and his wife began excavations on Rusinga Island, and in 1949 they found the first complete Proconsul skull, together with face—a missing link between monkey and ape. After that the Leakeys received a new grant to continue their research. In 1951 Louis went back to Olduvai Gorge, but initially found nothing more of interest there. It was only in 1959, after years of continuous hard work and stubborn persistence, that the Leakeys made a new discovery: a skeleton of a hominid, which the Leakeys named “Zinj.” The find brought great publicity to both Louis and Mary, ensuring them worldwide fame.

During the 1960s Louis and Mary drifted apart, but never officially divorced. While she focused on Olduvai Gorge, he continued his own projects. He helped several primatologists, later named “Leakey’s angels,” including Jane Goodall, in their research on non-human primates. He also conducted excavations in Ethiopia and a search for ancient humans in California. He was very popular in the United States.

In 1972 Leakey died of a heart attack in London. Mary Leakey continued her research, and later made perhaps the most important discovery in Palaeolithic archaeology, finding the Laetoli footprints. Their son, Richard Leakey, also became a famous paleoanthropologist.

In a time when scientists believed that humanity originated somewhere in Asia, Louis Leakey argued that early human ancestors came from Africa. He found numerous bones, tools, and artifacts in Africa, especially at Olduvai Gorge and Rusinga Island, which led him to this belief. His early find, at Kanam and Kanjera in 1932, which Leakey named "Homo kanamensis," was originally thought to be the oldest Homo sapiens in the world, and the true ancestor of human beings. However, when Leakey was unable to show the site where he originally found the bones, his discovery was discarded. Modern scientists believe that the fossils of Homo kanamensis were in fact modern human bones buried in older sediments.

Despite this early setback in his research, Leakey, together with his wife Mary Leakey, went on to make some of the most significant paleoanthropological discoveries of the twentieth century. Among Leakey’s many extraordinary finds was the 1959 unearthing of Zinjanthropus, a robust hominid that hinted at the great complexity of mankind's evolutionary roots. Leakey called it Zinjanthropus boisei, and believed that it belonged in the line of direct human ancestors. Later, however, it was classified as australopithecus. In 1964 he and his wife discovered the skull and hand of what was recognized as a new species—Homo habilis, or “the human who used tools.” Using the carbon-14 dating technique, researchers from the University of California at Berkeley have estimated that the site where they were found, and the bones themselves, were 1.75 million years old.

Leakey's theoretical work was no less controversial than his first discoveries. He argued that the human lineage had distinctive roots, separate from all other hominid lines, including Java Man, Peking Man, "Rhodesian Man," and Neanderthal. He put all the latter in the line of Paleoanthropidae or ancient men, while he considered the modern human lineage as a separate line, or Neoanthropidae (new men). Leakey even claimed that both Australopithecus and Homo erectus did not belong into the line of true humans, but that they were just extinct offshoots of it. Modern scientists consider Java, Peking, Rhodesian Man, and Neanderthal as direct ancestors, or at least close relatives, of modern man.

Even though he was wrong in many of his assumptions, Leakey’s work helped in the discovery of the origins of modern human beings. His findings established that human ancestors used tools 1.75 million years ago. Later findings by his wife, Mary, and his son, Richard also contributed toward defining the roots of the human lineage in Africa.

Another of Leakey's legacies stems from his role in fostering field research of primates in their natural habitat, which he understood as key to unraveling the mysteries of human evolution. Leakey chose three female researchers, later dubbed "Leakey's Angels," who each went on to become giants in the field of primatology. Jane Goodall became the first of Leakey's Angels in 1957, when she began her first field study of chimpanzee culture in the Gombe Stream National Park in Tanzania. In 1967 Dian Fossey became Leakey's second Angel, beginning her extended study of mountain gorillas in the Virunga Volcanoes of Rwanda. In 1971 Biruté Galdikas became the third, when she began field studies of orangutans in the jungles of Borneo.