Paleoanthropology is a sub-discipline of anthropology and paleontology, and is also known as human anthropology. Studying hominid fossil evidence, such as petrified bones and footprints, as well as artifacts such as tools, and even incorporating knowledge of current primate species, paleoanthropologists essentially study the origin of human beings.

Of great interest to this field is the theory of human evolution, including the pattern and process of evolution, or the search for the "missing link" between the apes and humans. Many paleoanthropologists have made their name through finding fossils purported to be of such an intermediate species, such as Davidson Black, who discovered "Peking Man," Eugene Dubois with "Java Man," Richard Leakey and his "Turkana Boy," and Donald Johanson who discovered the 3.2 million year old Australopithecine fossil " Lucy." Beyond the excitement of finding such examples, these scientists also debate the geographical origins of humankind, with each find supporting or disproving the various theories. Historically, a major source of controversy has been the process by which humans have developed, whether by a force with a random component (natural selection) or by the creative force of a Creator God. Abrahamic religions believe in a single-point origin of modern humans, beginning with an "Adam and Eve."

The word paleoanthropology is an academic creation that combines the Ancient Greek paleo, which refers to prehistoric time periods, with "anthropology," itself a combination of Greek words which mean "study of man."[1]

Paleoanthropology is actually a sub-division of two different larger fields of study: Anthropology and paleontology, and is sometimes known as human paleontology. Anthropology is concerned with the study of humankind's cultural and biological evolution through all time. Paleontology is the study of prehistoric life forms on Earth through the examination of fossils. Hence, paleoanthropology studies the prehistoric ancestors of humankind, referred to in a group as hominids. The discipline often overlaps with geology (the study of rocks and rock formations) as well as with botany, biology, zoology, and ecology—fields concerned with life forms and how they interact. 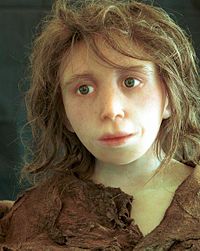 Reconstruction of a Neanderthal child, made using modern techniques of computer-assisted paleoanthropology from the Gibraltar 2 Neanderthal specimen.

The modern field of paleoanthropology (study of human origins) began in the nineteenth century with the discovery of "Neanderthal man" (the eponymous skeleton was found in 1856, but there had been finds elsewhere since 1830). However, fossils of Neanderthals were widely misinterpreted as skeletons of modern humans with deformation or disease.[2]

Areas where evidence is thought to be buried are systematically noted for geological data before layers of earth are removed slowly. Noting the condition and details of the location of the find is just as crucial as uncovering fossils. Once remains are discovered, they are usually sent to a laboratory or research center where they are carefully studied, using chemical and physical dating methods, X-Rays, MRIs, and other special tools. Paleoanthropologists are most interested in noting how the finds are similar and how they are different from already established ancestral lines.

Africa and Asia are two of the most popular sites for paleoanthropologists in the field, for they have historically yielded the oldest and most promising evidence. However, as recent finds in South America and Europe push the date of humankind's origin further back, paleoanthropologists can be found worldwide seeking to make a discovery of ancient human remains. 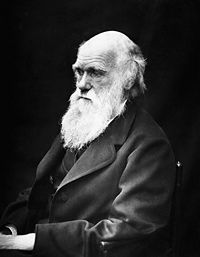 The science of paleoanthropology is based upon the scientific theories of Human evolution. These involve both the pattern of evolution (descent with modification, the non-causal relations between ancestral and descendant species) and the process of evolution (various theories involving mechanisms and causes for the pattern observed, including fundamental concepts such as natural selection, punctuated equilibrium, and design, and specific scenarios, such as those involving movement from trees, use of tools, "out of Africa," and so forth).

The idea that humans are similar to certain great apes had been obvious to people for some time, but the idea of the biological evolution of species in general was not significantly advanced until after Charles Darwin published On the Origin of Species, in 1859. Though Darwin's first book on evolution did not address the specific question of human evolution—"light will be thrown on the origin of man and his history" was all Darwin wrote on the subject—the implications of evolutionary theory were clear to contemporary readers.

Debates between Thomas Huxley and Richard Owen focused on the idea of human evolution. Huxley convincingly illustrated many of the similarities and differences between humans and apes in his 1863 book, Evidence as to Man's Place in Nature. By the time Darwin published his own book on the subject, Descent of Man, it was already a well-known interpretation of his theory—and the interpretation helped make the theory of natural selection highly controversial. Even many of Darwin's original supporters (such as Alfred Russel Wallace and Charles Lyell) balked at the idea that human beings could have evolved their apparently boundless mental capacities and moral sensibilities through natural selection.

Substantial evidence has been marshaled for the fact that humans have descended from common ancestors by a process of branching (descent with modification) and for a primate origin of humans. However, proposals for the specific ancestral-descendant relationships and for the process leading to humans tend to be speculative. And, while the theory of natural selection typically is central to scientific explanations for the process, evidence for natural selection being the directive or creative force is limited to extrapolation from the microevolutionary level (changes within the level of species).

Since the time of Carolus Linnaeus in the eighteenth century, the great apes were considered the closest relatives of human beings, based on morphological similarity. In the nineteenth century, it was speculated that the closest living relatives to human beings were chimpanzees and gorillas. Based on the natural range of these creatures, it was surmised that humans share a common ancestor with other African apes and that fossils of these ancestors would ultimately be found in Africa.

It was not until the 1920s that hominid fossils were discovered in Africa. In 1924, Raymond Dart described Australopithecus africanus. The specimen was the Taung Child, an australopithecine infant discovered in a cave deposit at Taung, South Africa. The remains were a remarkably well-preserved tiny skull and an endocranial cast of the individual's brain. Although the brain was small (410 cm3), its shape was rounded, unlike that of chimpanzees and gorillas, and more like a modern human brain. Also, the specimen exhibited short canine teeth, and the position of the foramen magnum (the hole in the skull where the spine enters) was evidence of bipedal locomotion. All of these traits convinced Dart that the Taung baby was a bipedal human ancestor, a transitional form between apes and humans.[3] However, the prevailing view of the time was that a large brain evolved before bipedality, it being thought that intelligence on par with modern humans was a prerequisite to bipedalism. Another twenty years would pass before Dart's claims were taken seriously, following the discovery of more fossils that resembled his find.

While there are many aspects of human evolution that paleoanthropologist agree upon, there are several puzzles in regards to the human evolutionary line. One of the most contested issues is from where humans originated. There are two dominant views on the issue of human origins, the Out of Africa position and the multiregional position. There are also various combinations of these ideas.

The Out of Africa (or Out of Africa II, or replacement) model holds that there was a migration of Homo erectus (or Homo ergaster) out of Africa and into Europe and Asia, but that these populations did not subsequently contribute significant amounts of genetic material (or, some say, contributed absolutely nothing) to later populations along the lineage to Homo sapiens.[4] Later, approximately 200,000 years ago, there was a second migration of hominids out of Africa, and this was modern Homo sapiens that replaced the populations that then occupied Europe and Asia.[4] This view maintains a specific speciation event that led to Homo sapiens in Africa, and this is the modern human.

The multiregional (or continuity) camp hold that since the origin of Homo erectus, there have been populations of hominids living in the Old World and that these all contributed to successive generations in their regions.[4] According to this view, hominids in China and Indonesia are the most direct ancestors of modern East Asians, and those in Africa are the most direct ancestors of modern Africans. The European populations either gave rise to modern Europeans or contributed significant genetic material to them, while their origins were in Africa or West Asia.[4] According to this model, there is genetic flow to allow for the maintenance of one species, but not enough to prevent racial differentiation.

Overall, the disagreement between these two camps has caused "fairly severe strife within the paleoanthropologist community."[4] Multiregionalism is often "portrayed as a racist theory," while Out of Africa II "has often been portrayed as a religiously motivated idea" that strives to align with the biblical story of Genesis.[4]

Other issues facing paleoanthropology deal with how current evidence is used to create theories. A major contention is that the fossil record remains fragmentary. No fossils of hominids have been found for the period between 6 and 13 million years ago (mya), the time when branching between the chimpanzee and human lineages is expected to have taken place.[5] Furthermore, as author Ernst Mayr notes "most hominid fossils are extremely incomplete. They may consist of part of a mandible, or the upper part of a skull without face and teeth, or only part of the extremities."[5] Even the famous "Lucy" finding (Australopithecus afarensis) was only a 40 percent complete female skeleton and lacked a head.[6]

Coupled with this is a recurrent problem that interpretation of fossil evidence is heavily influenced by personal beliefs and prejudices. Fossil evidence often allows a variety of interpretations, since the individual specimens may be reconstructed in a variety of ways.[7] As Mayr notes, "subjectivity is inevitable in the reconstruction of the missing parts," and virtually all hominid finds and interpretations are "somewhat controversial!"[5] Another author recounts several examples where the pieces of fossils found offered a variety of reconstructions that were sometimes dramatically different, such as long face versus a short face, a heavy brow, a missing forehead. Different interpretations of two sections of a fossil skull and how to place one of those pieces led Roger Lewin to recount, "How you held it really depended on your preconceptions. It was very interesting what people did with it."[7] 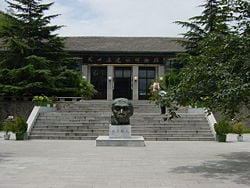 Zhoukoudian Peking Man Site—the Museum (taken in July 2004). At the center: What Peking Man looked like. 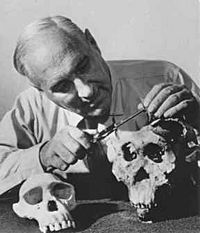