Paleobotany (from the words paleon, "old," and botanikos, "of herbs") is the branch of paleontology dealing with the recovery and identification of plant remains from geological contexts, and their use in the reconstruction of past environments and the history of life.

Paleobotany not only addresses the inner nature of humans to know more about the history of life, but also has practical application today, helping people to better understand such aspects as climate change.

Paleobotany is important in the reconstruction of prehistoric ecological systems and climate, known as paleoecology and paleoclimatology respectively, and is fundamental to the study of plant development and evolution. Paleobotany has also become important to the field of archaeology, primarily for the use of phytoliths ("plant stone") in relative dating and in paleoethnobotany. Paleobotany shows one of the core values of science, that is, the willingness of the scientific community to work beyond borders of particular disciplines.

Overview of the paleobotanical record

Macroscopic remains of true vascular plants are first found in the fossil record during the Silurian period. Some dispersed, fragmentary fossils of disputed affinity, primarily spores and cuticles, have been found in rocks from the Ordovician period of Oman and are thought to derive from liverwort- or moss-grade fossil plants (Wellman et. al. 2003).

An important early land plant fossil locality is the Rhynie Chert, an Early Devonian sinter (hot spring) deposit composed primarily of silica found outside the town of Rhynie in Scotland. 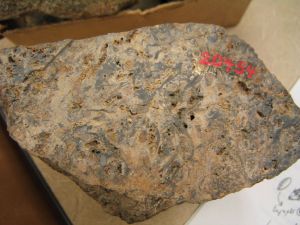 An unpolished hand sample of the Lower Devonian Rhynie Chert from Scotland.

The Rhynie Chert is exceptional due to its preservation of several different clades of plants, from mosses and lycopods to more unusual, problematic forms. Many fossil animals, including arthropods and arachnids, are also found in the Rhynie Chert, and it offers a unique window on the history of early terrestrial life.

Widespread coal swamp deposits across North America and Europe during the Carboniferous period contain a wealth of fossils containing arborescent lycopods up to 30 meters tall, abundant seed plants, such as conifers and seed ferns, and countless smaller, herbaceous plants.

Palynology is the science that studies contemporary and fossil palynomorphs; that is, particles of a size between five and 500 micrometres, found in rock deposits, and composed of organic material. Such palynomorphs studied include pollen, spores, dinoflagellate cysts, acritarchs, chitinozoans, and scolecodonts, together with particulate organic matter (POM) and kerogen found in sedimentary rocks and sediments.

The term palynology was introduced by Hyde and Williams in 1944, following correspondence with the Swedish geologist Antevs, in the pages of the Pollen Analysis Circular (one of the first journals devoted to pollen analysis, and produced by Paul Sears in North America). Hyde and Williams chose palynology on the basis of the Greek words paluno meaning to sprinkle, and pale meaning dust (and thus similar to the Latin word pollen).

Palynomorphs are broadly defined as organic-walled microfossils between five and 500 micrometers in size. They are extracted from rocks and sediments both physically, by wet sieving, often after ultrasonic treatment, and chemically, by using chemical digestion to remove the non-organic fraction. For example, palynomorphs may be extracted using hydrochloric acid (HCl) to digest carbonate minerals, and hydrofluoric acid (HF) to digest silicate minerals in suitable fume cupboards in specialist laboratories.

Samples are then mounted on microscope slides and examined using light microscopy or scanning electron microscopy. Once the pollen grains have been identified they can be plotted on a pollen diagram that is then used for interpretation. Pollen diagrams are useful in giving evidence of past human activity (anthropogenic impact), vegetation history, and climatic history.

Palynology uses many techniques from other related fields such as geology, botany, paleontology, archaeology, pedology (soil study), and geography.

Palynology is used for a diverse range of applications, related to many scientific disciplines:

Because the distribution of acritarchs, chitinozoans, dinoflagellate cysts, pollen, and spores provides evidence of stratigraphical correlation through biostratigraphy and paleoenvironmental reconstruction, one common and lucrative application of palynology is in oil and gas exploration.

Palynology also allows scientists to infer the climatic conditions from the vegetation present in an area thousands or millions of years ago. This is a fundamental part of research into climate change.

Paleoecology uses data from fossils and subfossils to reconstruct the ecosystems of the past. It includes the study of fossil organisms in terms of their life cycle, their living interactions, their natural environment, their manner of death, and their burial.

Paleoecology's aim is therefore to build the most detailed model possible of the life environment of those living organisms that are found today as fossils; such reconstruction work involves complex interactions among environmental factors (temperature, food supplies, degree of solar illumination, etc.). Of course, much of this complex data has been distorted or destroyed by the post-mortem fossilization processes, adding another layer of complexity.

The environmental complexity factor is normally tackled through statistical analysis of the available numerical data (quantitative paleontology or paleostatistics), while post-mortem processes as a source of information are known as the field of taphonomy.

Much paleoecological research focuses on the last two million years (formerly known as the Quaternary period), because older environments are less well-represented in the fossil timeline of evolution. Indeed, many studies concentrate on the Holocene epoch (the last 10,000 years), or the last glacial stage of the Pleistocene epoch (the Wisconsin/Weichsel/Devensian/Würm glaciation]] of the ice age, from 50,000 to 10,000 years ago). Such studies are useful for understanding the dynamics of ecosystem change and for reconstructing pre-industrialization ecosystems. Many public policy decision makers have pointed to the importance of using paleoecological studies as a basis for choices made in conservation ecology. Often paleoecologists will use cores from lakes or bogs to reconstruct pollen assemblages, lithology, and to perform geochemical analysis. These tools aid in determining the species composition and climatic conditions, which can contribute to the understanding of how ecosystems change and have changed with climatic and environmental conditions.

The standard botanical author abbreviation Sternb. is applied to species he described.