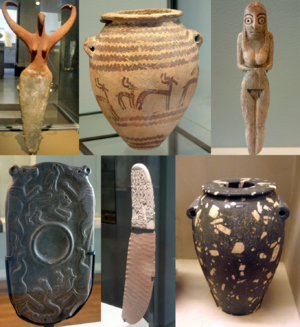 In archaeology, an artifact or artefact is any object made or modified by a human culture, individual or group. Often the artifact—or object—is recovered long after the time it served its purpose, through an archaeological endeavor or even by accident or chance. Examples of artifacts from various time periods would include stone tools such as projectile points, pottery vessels, metal objects such as buttons or guns, and items of personal adornment such as jewelry and clothing. Other examples include bone that show signs of human modification, fire cracked rocks from a hearth, or plant material used for food. Interestingly, one of the most common artifacts found is garbage.

In addition to giving archaeologists important information about previous cultures and civilizations, artifacts aid in dating earth's time periods and in historical record keeping. If a picture is "worth a thousand words" as the expression goes, then artifacts tell even more. Their beauty, rarity, and history unlock the secrets of their ancient owners. 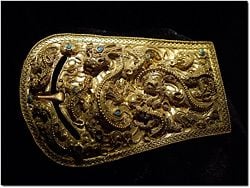 In archaeology it is not only the physical location of a discovery that holds significance, but the context (or setting) as well. And an archaeological context does not only refer to a geographical place, it can also be an event in time which has been preserved in the archaeological record. Multiple fills of soil in a ditch, for example, could imply multiple contexts. By separating a site into basic, discrete units, archaeologists are able to create a chronology for activity on a site and not only describe it, but allow for its interpretation as well.

Artifacts can come from many different sources such as:

Most grave goods recovered by archaeologists consist of inorganic objects such as pottery, stone, and metal tools, but there is evidence that already decayed organic objects were also placed in ancient tombs. Some of the most famous and well preserved grave goods are those from ancient Egypt. Ancient Egyptians believed that goods buried in tombs could be used by the deceased in the afterlife.

Middens, dumps which contain human waste, can also contain a variety of archaeological material, including animal bone, feces, shell, botanical material, vermin, sherds, lithics, and other ecofacts associated with past human habitation. Middens are useful resources for archaeologists who wish to study the diet and habits of past societies. Middens with damp, anaerobic conditions can even preserve organic remains which can be analyzed to obtain information regarding climate and seasonal use.

In archaeology, a hoard is a collection of artifacts purposely buried in the ground, usually with intention to recover them at a later date. Hoarders oftentimes died before retrieving their loot, and these surviving artifacts can sometimes be uncovered at a later time by hobbyists with metal-detectors or by archaeologists.

Hoards provide a useful method of determining the dates of artifacts. They can also, sometimes, indicate the degree of conflict or war in an ancient society. For example, circumstances in fifth and sixth century Britain spurred the burial of several famous hoards whose remains can be seen today at the British Museum in London.

A votive deposit or votive offering is an object left in a sacred place for ritual purposes. A contemporary example would be that of the Roman Catholic Church where offerings are made either to fulfill a vow, or are objects given to the Church in gratitude for some favor that was granted. Today, votives can be lit candles, or offered flowers, statues, vestments, or donations such as those deposited into a fountain or altar.

Use of artifacts in archaeological analysis 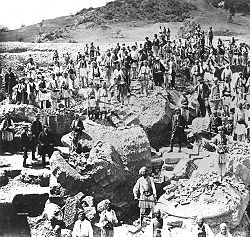 Artifacts are often called finds when handled during archaeological excavation. Artifacts are related to the archaeological record by their position defined by the Archaeological context they are discovered in. This is important for Seriation and relative dating analysis, and is closely related to work post excavation with the use of a Harris matrix that is created during the excavation process. The Harris Matrix is a tool developed by British archaeologist Edward Cecil Harris in 1973 to assist in the examination and interpretation of the stratigraphy of archaeological sites.

An analysis of archaeological finds are often made during excavation for the purpose of spot dating. Spot dating tends to rely on pottery typology. This pottery dating analysis was pioneered by 19th century archaeologists such as Georg Loeschcke. Apart from dating and supporting the process of excavation, artifacts lend themselves to a host of post excavation disciplines. Post excavation analysis is normally the most time-consuming part of an archaeological investigation. It is not uncommon for the final excavation reports on major sites to take years to be published.

The processing and interpretation of those material remains, in conjunction with the artifacts themselves, is the essential final step in completing the picture of past human activities occurring in an area over time. Artifacts, ecofacts, and features say little themselves, but researchers can make meaningful inferences about these when they are studied closely and in detail. Analysis is the examination, description, classification, and identification of that material, as well as consideration of its broader meaning.

Natural objects which have been moved but not changed by humans are called manuports. Examples would include seashells moved inland or rounded pebbles placed away from the tidal action that would have fashioned them.

These distinctions are often blurred; for instance, a bone removed from an animal carcass is a biofact, but a bone carved into a useful implement is an artifact. Similarly there can be debate over early stone objects and whether they are crude artifacts made by humans or are instead naturally occurring phenomena that only appear to have been used by humans.

The degree to which an artifact represents the social grouping from which it came is a subject over which archaeological theoreticians disagree. Focusing on the artifact alone can produce enlightening information about the object itself, but such close scrutiny can ignore other mitigating factors which may shed further light on the society being studied. Traditional museums are often criticized for being too "artifact-led," that is for displaying items without any contextual information about their purpose or the people who made them.

Although most people think of collections as objects from the same geographical area, museums often identify collections by the donor’s name. Collections can be created by private individuals, early archaeologists, or by professional archaeologists. Often, collections will focus on a specific region of the world and some are held in storage for research purposes only.

Examples of interesting artifacts abound and can be seen at museums such as the American Museum of Natural History in New York or the Smithsonian Museum in Washington D.C.. The Smithsonian, in particular, is home to the oldest collection of artifacts from the age of flight, including the Wright brothers 1903 Flyer and the landing module from the 1969 Apollo 11 flight to the moon.

One of the most highly attended touring exhibits in the United States in 2007 and 2008, was the artifact collection of the ancient Egyptian pharaoh King Tutankhamen (King "Tut"). The collection Royal Burial Treasures, discovered in 1922, contains priceless objects from the Golden Age of Pharaohs.[2]

The Burke Musem in Seattle, Washington, displays many Pacific Northwest Indian artifacts. Some of the museum's research-related focus is on the arctic habitats of polar bears and migratory birds.[3]

Many artifacts are bought and sold by collectors. Popular Indian artifacts for sale are spear points and arrowheads.[4] Other popular artifacts to buy and sell are coins from Roman, Greek and Biblical times, Celtic rings, stamps, and even Civil War bullets.[5] The book, Lucy's Bone, Sacred Stones & Einstein's Brain: The Remarkable Stories Behind the Great Objects and Artifacts of History, from Antiquity to the Modern Era, lists and pictures a variety of artifacts, and although some are just for fun, they all have historical interest:[6]

Artifacts and their related documents, photographs, and maps, require cataloging, preservation, and analysis. Curation involves storing artifacts and archives using conservation-quality products, cataloging them in a computerized database and monitoring the artifacts and storage environment over time. This ongoing preservation of the past for the future is often done by volunteers and supported through generous archaeological endowments.

Artifacts are the legacy of all human cultures and all of the natural world since the beginning of time. Artifacts carry important messages across time about the inhabitants of the earth and reveal important information about origins and development.