Homo ergaster is an extinct hominin that lived in eastern and southern Africa from about 1.8 million years ago (mya) to about 1.3 mya. It is variously considered to be (1) a distinct species, perhaps ancestral to the Asian Homo erectus; (2) a subspecies of H. erectus, H. erectus ergaster; or (3) the African variety of H. erectus, with "Homo erectus sensu stricto" for the Asian H. erectus, and "Homo erectus sensu lato" for the larger species comprising both the early African populations and the Asian populations. It is one of the earliest known members of the genus Homo and, although it is unclear what genetic influence H. ergaster had on later hominids, it is widely proposed to be the direct ancestor of such later hominids as Homo heidelbergensis, Homo sapiens, Homo neanderthalensis, and Asian Homo erectus.

The binomial name was published in 1975 by Groves and Mazák. The second part, "ergaster", is derived from the Ancient Greek ἐργαστήρ "workman", in reference to the comparatively advanced lithic technology developed by the species, introducing the Acheulean industry.

Just as various periods are recognized in the geological history of the Earth (eg., Cambrian, Ordovician, and other stages), and in the history of an individual (egg, birth, child, youth, adult, death), various stages are recognized in the evolutionary history of humanity, with primitive humans being the foundation for later stages. However, despite the considerable skulls and partial skeletons of H. ergaster and H. erectus that have been unearthed in Africa, Asia, and eastern Europe, researchers remain uncertain the place these hominids are exactly aligned in the human evolutionary lineage and even whether later findings in Asia are the same species as those attributed to earlier specimens in Africa.

The earliest delineated member of the genus Homo is H. habilis, which lived from 2.33 to 1.44 million years ago, although some authorities do not consider it should be included in Homo, considering it more worthy, for example, to be retained in Australopithecus (Wood and Richmond 2000). Homo habilis is generally accepted as the putative ancestor of the genus Homo (Wood and Collard 2001) and often of H. ergaster most directly. H. habilis and H. ergaster coexisted for 200,000-300,000 years, possibly indicating that these species diverged from a common ancestor (Urquhard 2007). H. ergaster is believed to have diverged from the lineage of H. habilis between 1.9 and 1.8 million years ago.

Homo ergaster (or Homo erectus) first appears in the fossil record from around 1.8 million years ago. Fossils identified as H. ergaster disappeared from the fossil record about 1.3 to 1.4 million years ago. However, Home erectus, either as synonymous with H. ergaster or as a distinct Asian population or species, survived until about 143,000 years ago. Homo erectus was apparently very successful, considering that fossils of the species have been found in Asia (Indonesia, India, Sri Lanka, and China), and Georgia (Caucasus region of Europe), as well as in Africa as H. ergaster.

There is also support for the idea that that the numerous distinct species being recognized in the fossil record, such as H. erectus and H. habilis, are actually just morphological variation among members of a single evolving lineage among early members of the Homo genus, and that perhaps even only one species with a lot of variability emerged from Africa (Wilford 2013; Watson 2013; Lordkipanidze et al. 2013).

It is unclear what genetic influence H. ergaster had on later hominids. Recent genetic analysis has generally supported the Out-of-Africa hypothesis, and this may designate H. ergaster the role of ancestor to all later hominids (Hazarika 2007). In general, H. ergaster is widely considered to be the direct ancestor of later hominids such as Homo heidelbergensis, Homo sapiens, Neanderthals, Denisovans, and even Asian Homo erectus.

Modern human beings, Neanderthals, and Denisovans are believed to have shared a common ancestor about 400,000 to 500,000 years ago (Marshall 2013; Green et al. 2010). One theory is that these three groups all descended from Homo heidelbergenesis, which lived between 600,000 to 250,000 years ago (Marshall 2013) (other species suggested as ancestral are H. rhodesiensis and H. antecessor). One branch of H. heidelbergenesis are theorized to have left Africa about 400,000 years ago and split shortly thereafter to become Neanderthals, which settled in West Asia and Europe, and Denisovans, which settled farther to the east (NG 2013).

Archaic Homo sapiens, the forerunner of anatomically modern humans, appeared between 400,000 and 250,000 years ago (O'Neil 2013). Anatomically modern humans are believed to have evolved from archaic Homo sapiens in the Middle Paleolithic, about 200,000 to 130,000 years ago (SA 2005; NG 2013), then migrated out of Africa some 50,000 to 100,000 years ago (Recent African Ancestory Theory) and replaced local populations of H. erectus, H. floresiensis, H. heidelbergenesis, and the Denisovan and Neanderthal populations.

The South African palaeontologist John T. Robinson first discovered a mandible of a new hominid in southern Africa in 1949; he named the species Telanthropus capensis, although it is now recognized as a member of Homo ergaster (Wood and Collard 2001). The name was first applied by Colin Groves and Vratislav Mazák to KNM-ER 992, a mandible discovered near Lake Rudolf (now Lake Turkana), Kenya in 1975, which became the type-specimen of the species.

The most complete skeleton of H. ergaster (and one of the most complete extinct hominids to date), KNM-WT 15000, was discovered at Lake Turkana, Kenya, in 1984 by paleoanthropologists Kamoya Kimeu and Alan Walker. They nicknamed the 1.6-million-year-old specimen "Turkana Boy."

Remains have been found in Tanzania, Ethiopia, Kenya, and South Africa.

H. ergaster remained stable for about 500,000 years in Africa before disappearing from the fossil record around 1.4 million years ago. No identifiable cause has been attributed to this disappearance; the later evolution of the similar H. heidelbergensis in Africa may indicate that this is simply a hole in the record, or that some intermediate species has not yet been discovered. 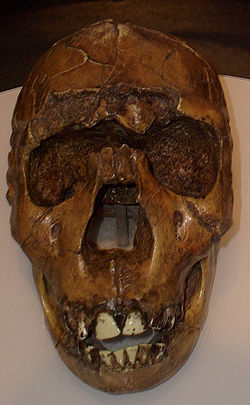 The differences between the early populations of H. erectus/H. ergaster in Africa and the later populations found in Asia, Europe, and Africa are substantial enough for the separation by many researchers into the early African H. ergaster and the mainly Asian populations H. erectus (Smithsonian 2014).

H. ergaster may be distinguished from H. erectus by its thinner skull-bones and lack of an obvious supraorbital foramen. It may be distinguished from Homo heidelbergensis by its thinner bones, more protrusive face, and lower forehead. Derived features separating it from earlier species include reduced sexual dimorphism (McHenry 1994), a smaller, more orthognathous(less protrusive) face, a smaller dental arcade, and a larger cranial capacity (700–900 cm³ in earlier ergaster-specimens, and 900-1100 in later specimens) (Hazarika 2007).

Many paleoanthropologists still debate the definition of H. ergaster with H. erectus as separate species. Some call H. ergaster the direct African ancestor at H. erectus, proposing that H. ergaster emigrated out of Africa and into Asia, branching into a distinct species (Tattersall and Schwartz 2001). Mayr (2001) notes Homo ergaster can be seen as a separate species or as a subspecies of H. erectus, Homo erectus ergaster. Most dispense with the species-name ergaster, making no distinction between such fossils as the Turkana Boy and Peking Man. Though "Homo ergaster" has gained some acceptance as a valid taxon, H. ergaster and H. erectus are still usually defined as distinct African and Asian populations of larger species H. erectus. The view of palaeoanthropologists who consider H. ergaster to be simply the African variety of H. erectus has led to the use of the term "Homo erectus sensu stricto" for the Asian H. erectus, and "Homo erectus sensu lato" for the larger species comprising both the early African populations (H. ergaster) and the Asian populations (Antón 2003).

Homo ergaster appears to have used more diverse and sophisticated stone tools than its predecessor, Homo habilis. H. ergaster refined the inherited Oldowan, developing the first Acheulean bifacial axes (Beck et al. 1999). While the use of Acheulean tools began around 1.6 million years ago, the line of H. erectus diverged some 200,000 years before the general innovation of Acheulean technology. Thus the Asian migratory descendants of H. ergaster made no use of any Acheulean technology.

Sexual dimorphism in H. ergaster is greatly reduced from its Australopithecine ancestors (around 20% according to McHenry 1994), but still greater than dimorphism in modern humans. This diminished dimorphism is speculated to be a sign of reduced competition for mates between males (Gray 2010), which also may correspond to the more modern social practices of ergaster.

Not only was H. ergaster like modern humans in body, but also more in organization and sociality than any earlier species. It is conceivable that H. ergaster was the first hominin to harness fire: whether as the containment of natural fire, or as the lighting of artificial fire, is still a matter of contention. It is now assumed, however, that erectus did have control of fire (Goren-Inbar et al. 2004), as well as every other hominin sharing a common ancestor with ergaster. The social organization of H. ergaster probably resembled that of modern hunter-gatherer societies. The reduced competition among males and dimorphism also coincided with an increase in brain size and efficiency of stone tools.

According to the BBC series Walking With Cavemen, Homo ergaster was probably the first hominid to use "what we would recognize as a human voice," though its symbolic cognition was probably somewhat limited compared to modern humans. It was thought for a long time that H. ergaster was restricted in the physical ability to regulate breathing and produce complex sounds. This was based on Turkana Boy's cervical vertebrae, which were far narrower than in later humans. Discoveries of cervical vertebrae in Dmanisi, Georgia some 300,000 years older than those of Turkana Boy are well within the normal human range (Bower 2006). It has been established, furthermore, that the Turkana Boy probably suffered from a disease of the spinal column that resulted in narrower cervical vertebrae than in modern humans (Wong 2003). While the Dmanisi finds have not been established definitively as H. ergaster; they are older than Turkana Boy (the only definite ergaster vertebrae on record), and thereby suggest kinship to ergaster. Turkana Boy, therefore, may be an anomaly.