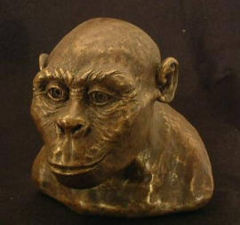 Australopithecus africanus, a hominid in both senses of the term.

A hominid is any member of the primate family Hominidae. Recent classification schemes for the apes place extinct and extant humans, chimpanzees, gorillas, and orangutans in Hominidae, and thus technically hominid refers to members of these groups. However, historically and even in some current classification schemes, Hominidae is restricted to humans and their close, extinct relatives—those more similar to humans than to the (other) great apes, which were placed in another family. Thus, there is a tradition of using the term hominid to refer only to humans and such forebears as Australopithecus, Homo habilis, and Homo erectus. In this sense, humans are considered the only surviving hominids.

This more restricted use of the term hominid is common in anthropology, where it has been used for decades to refer only to humans and their extinct relatives. The more expansive meaning is becoming increasing common among zoologists and systematists.

The revision of primate taxonomy over time and variation in what is meant by the term hominid reflects the nature of science, which often has competing theories and competing schools of thought. Through dialogue and harmony, scientists strive to advance understanding of the world.

The primatological term hominid is easily confused with a number of very similar words:

Historical and current use

For many years, humans were placed in the primate family Hominidae, and considered hominids, while chimpanzees, gorillas, and orangutans were placed in the primate family Pongidae, and labeled as pongids. Over time, particularly since the 1960s, the use of morphological and genetic studies led to the recategorization of primates and the placement of humans, chimpanzees, gorillas, and orangutans together in Hominidae. In such a scheme, the use of the term hominid would properly refer to all four groups, and their extinct relatives, and thus hominid is being used more commonly in that sense. Indeed, the terms hominid and "great ape" are now effectively interchangeable among many zoologists.

Nonetheless, because of tradition in anthropology, whereby hominid had one clear meaning in the literature for decades, anthropologists commonly use hominid to refer to the group in which humans are the only living representative. Note, for example, eminent evolutionist Ernst Mayr's (2001) use in his book, What Evolution Is, where he makes such statements as "There is no documentation of the branching event between the hominid and the chimpanzee lineages."

There is also some resistance to a change in the meaning of hominid, which has been so widely used for such a long time.

Moreover, there is also a taxonomic scheme whereby gorillas and chimpanzees (and the related bonobos) are placed into the Panidae family, while orangutans remain in the Pongidae family, and humans in the Hominidae. In this scheme, the term hominid also applies only to humans and their close relatives.

Certain morphological characteristics are still used conventionally to support the idea that hominid should only denote humans and human ancestors, namely bipedalism and large brains. Others believe, however, that these points of departure between human beings and the other great apes are important, but taxonomically do not divide H. sapiens into separate families, and that genetic testing is the critical barometer of relatedness—and in this respect humans and the other great apes ought to be of the same family.