Mary Douglas Leakey (née Nicol) (February 6, 1913 – December 9, 1996) was a British physical anthropologist and the wife of Louis Leakey, famous for her discovery of Homo habilis and the "Laetoli footprints." Although she never completed a formal university education, her archaeological excavations led to some of the most significant discoveries of the twentieth century. Together with her husband, she uncovered fossils of pre-human hominids, and, after his death, the fossilized trail of footprints which led to new understanding of the development of bipedalism. Her persistent efforts changed our view of human evolution.

Leakey was born on February 6, 1913 into the family of Cecilia Frere and Erskine Nicol, a landscape architect of Scottish descent. Due to the nature of her father’s job, the Nicol family frequently moved from place to place, living in France, Italy, and England. While living in Dordogne, France, Mary met Abbe Lemozi, who led archaeological excavations in nearby Cabrerets. It was there that her interest in prehistory was sparked.

After the death of her father in 1926, Mary’s mother placed her in a Catholic convent, but due to her rebellious nature she was expelled. Instead, Mary started attending lectures on archaeology and geology at the University of London, which was rather unusual for a woman at that time. Her artistic abilities helped her, allowing her to enter the field as an illustrator for Gertrude Caton-Thompson's book, The Desert Fayoum.

Through Caton-Thompson she met Louis Leakey. Mary showed Leakey her illustrations, and he arranged for her to illustrate his book, Adam's Ancestors. Although Louis was married at the time, they fell in love and, following his divorce, were married in 1936. The couple had three sons: Jonathan in 1940, Richard in 1944, and Philip in 1948.

Leakey’s first important excavation was at Hembury Fort in Devon, England, in May of 1934. Later that year, she performed her second excavation at Jaywick Sands, and published her first scientific paper. Together with her husband, Leakey moved to East Africa where, now as a couple, they began joint excavations. The Leakeys dug at Olduvai Gorge in the Serengeti plains of Northern Tanzania, which yielded many stone tools, ranging from primitive stone-chopping instruments to multi-purpose hand axes. These finds came from Stone Age cultures dating as far back as 100,000 to two million years ago. It was during these 20 years of work that the Leakeys made their major discoveries that ensured them world fame.

Mary and Louis Leakey were jointly awarded the "Stopes Medal" from the Geological Association in 1955. In March of 1962, the Leakey family took a trip to the United States to receive the Gold Hubbard Medal, the highest honor the National Geographic Society offers. In 1969 Leakey received an honorary degree from the University of the Witwatersrand in Johannesburg, South Africa, the only academic degree she ever received.

In the 1960s, partially due to Louis' womanizing nature and partially because of his other projects, Mary and Louis grew apart, although they never officially divorced. Louis died on October 1, 1972 of a heart attack. After that, Mary continued her work at Olduvai and Laetoli. It was at the Laetoli site that she made her greatest discovery—she uncovered the Laetoli footprint trail, left in volcanic ashes some 3.6 million years ago. The years that followed this discovery were filled with research at Olduvai and Laetoli, follow-up work to discoveries, and preparing publications.

Together with her husband, Louis Leakey, Mary Leakey was involved in some of the most significant paleoanthropology findings of the twentieth century. One of the first important discoveries the Leakeys unearthed was a Proconsul africanus skull, dated twenty million years old, on Rusinga Island in October of 1947. This skull was the first fossil of this ancestor of both apes and early humans ever to be found, and only two others have been discovered since.

Their next major discovery, in 1959, was a 1.75 million-year-old skull of Zinjanthropus (later named Australopithecus boisei), after which the Leakeys became world famous. They also found a less robust skull and bones of a hand of a species that later became known as Homo habilis. After reconstruction, the hand was proven to be capable of precise manipulation. 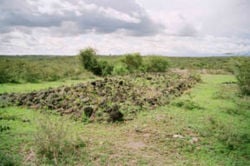 The site is Pliocene, dated by the Potassium-argon method to 3.7 million years ago. A line of hominid footprints, was discovered in 1976-1977 by Leakey, Richard Hay, and their team, preserved in powdery ash from an eruption of the 20 kilometers distant Sadiman volcano. Soft rain cemented the ash-layer (15 centimeters thick) to tufa, without destroying the prints. In time, they were covered by other ash deposits.

The footprints demonstrate that these hominids walked upright habitually, as there are no knuckle-impressions. The feet do not have the mobile big toe of apes; instead, they have an arch (the bending of the sole of the foot) typical of modern humans. The discovery caused serious debate among scientists, requiring them to change their theories concerning the evolution of bipedalism.

The hominid prints were produced by two distinct individuals, or possibly three, one walking in the footprints of the other making the original tracks difficult to discover. One individual (hominid 2 in chart above) was significantly smaller, although both sizes of footprint are smaller than those of modern, adult humans. They seem to have moved at a leisurely stroll. As the tracks lead in the same direction, they might have been produced by a group, but there is nothing else to support the common reconstruction of a nuclear family visiting the waterhole together.

In addition to footprints, Leakey’s team found the remains of 13 hominids, mainly mandibles and teeth. They show similarities to the female skeleton "Lucy" from Hadar, Ethiopia. Most scholars classify them as Australopithecus afarensis, but some stress the greater similarity to the Homo genus.

Even though without a formal education in archaeology, Leakey can be considered a true archeologist. Her great discoveries, both Australopithecus boisei and the "Laetoli footprints," not only contributed toward our knowledge of human origins, but caused scientists to reconsider their and revise their theories of human evolution.

The work of Leakey, her husband Louis, and son Richard, has inspired new generations of archeologists who have continued in their footsteps.