The term nuclear family refers to the family group consisting of parents and children, as opposed to the extended family which includes all those with kinship ties. Throughout history, families have been central to human society, the basic social unit for the expression of love between man and woman and the creation and raising of children. Although the twentieth century saw the decline in strength and numbers of the nuclear family, it has also been noted that there was never an age in history when the ideal family existed. As we move forward into an age in which barriers are broken down and we come to live together as one human family, the essential nature of individual families is key to harmonious human societies. The three-generational family, including grandparents in addition to parents and children, provides the greatest support for the raising of children and continuation of the lineage. 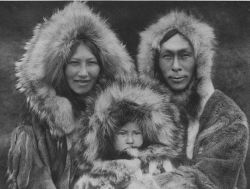 The term nuclear family was developed in the western world to distinguish the family group consisting of parents and their children, from what is known as an extended family. According to Merriam-Webster, the term dates back to 1947 and is therefore relatively new, although nuclear family structures themselves are not.[1][2]

Margaret Mead, based on her anthropological research, affirmed the centrality of the nuclear family in human society:

As far back as our knowledge takes us, human beings have lived in families. We know of no period where this was not so. We know of no people who have succeeded for long in dissolving the family or displacing it ... Again and again, in spite of proposals for change and actual experiments, human societies have reaffirmed their dependence on the family as the basic unit of human living—the family of father, mother and children.[3]

In its most common usage, the term "nuclear family" refers to a household consisting of a father, a mother and their children (siblings).[4] George Peter Murdock has also described the term in this way:

The family is a social group characterized by common residence, economic cooperation and reproduction. It contains adults of both sexes, at least two of whom maintain a socially approved sexual relationship, and one or more children, own or adopted, of the sexually cohabiting adults.[5]

Around the world, the structures of family norms are different. Ideas of what constitute a family changes based on culture, mobility, wealth, and tradition. Yet, as James Q. Wilson has stated:

In virtually every society in which historians or anthropologists have inquired, one finds people living together on the basis of kinship ties and having responsibility for raising children. The kinship ties invariably imply restrictions on who has sexual access to whom; the child-care responsibilities invariably imply both economic and non-economic obligations. And in virtually every society, the family is defined by marriage; that is, by a publicly announced contract that makes legitimate the sexual union of a man and a woman.[6]

In many cultures, the need to be self-supporting is hard to meet, particularly where rents/property values are very high, and the foundation of a new household can be an obstacle to nuclear family formation. In these cases, extended family forms. People remain single and live with their parents for a longer period of time. Generally, the trend to shift from extended to nuclear family structures has been supported by increasing mobility and modernization.

Some have argued that the extended family, or at least the three-generational family including grandparents, provides a broader and deeper foundation for raising children as well as support for the new parents. In particular, the role of grandparents has been recognized as an important aspect of the family dynamic. Having experienced the challenges of creating a family themselves, they offer wisdom and encouragement to the young parents and become a reassuring presence in the lives of their grandchildren. Abraham Maslow described the love of grandparents as "the purest love for the being of the other." [7] The benefits of these intergenerational encounters are substantial for all involved.

Contemporary society generally views the family as a haven from the world, supplying absolute fulfillment, and encouraging “intimacy, love and trust where individuals may escape the competition of dehumanizing forces in modern society.”[8] The family is often referred to as a haven providing love and protection from the rough and tumble industrialized world, and as a place where warmth, tenderness and understanding can be expected from a loving mother and protection from the world can be expected from the father. It is important to note that the cohesiveness of the family is contingent upon the relationship of all its members, particularly the father and mother. They establish the bonds each member has to each other, strengthening the nuclear family.

However, the idea of protection is declining as civil society faces less internal conflict combined with increased civil rights and protection from the state. To many, the ideal of personal or family fulfillment has replaced protection as the major role of the family. The family now supplies what is “vitally needed but missing from other social arrangements.”Cite error: Closing </ref> missing for <ref> tag

Social conservatives often express concern over a purported decay of the family and see this as a sign of the crumbling of contemporary society. They feel that the family structures of the past were superior to those today and believe that families were more stable and happier at a time when they did not have to contend with problems such as illegitimate children and divorce. Others refute this theory, claiming “there is no golden age of the family gleaming at us in the far back historical past.”Cite error: Invalid <ref> tag; invalid names, e.g. too many

The number of single parent families in society is challenging the idea of the nuclear family. Divorce has given rise to different living arrangements for parents and children. These post-nuclear families have been described as “broken because the marriage bond has been broken.”[9] Single parent families also form as a result of the death of a spouse in the family. This changes the family dynamic, shifting responsibilities to the remaining spouse and new obligations for the children.

In the United States, however, the nuclear family remains more prominent—73 percent of all households in the 2000 United States Census—than any other alternative.[10]

A strong nuclear family in these modern times presents each member with peers that they are able to confide in, and a social support network they are able to rely on in times of stress. The rise of single parent households present certain dangers of spending too much time in the work area, away from their children. A strong nuclear family allows everyone to take care of each other.

When a newly married couple moves far away from their parents, establishing their own nuclear family, isolation from their extended family may prove stressful. Families in which three generations interact in close harmony provide the greatest support for successfully raising children. Such children are then ready to relate to people of all ages in society, and are substantially connected to traditions and beliefs of their lineage.