Robert Mearns Yerkes (May 26, 1876 – February 3, 1956) was a psychologist, ethologist, and primatologist, best known for his work in intelligence testing and in the field of comparative psychology. Yerkes was a pioneer in the study of both human and primate intelligence, and of the social behavior of gorillas and chimpanzees. Yerkes worked with John D. Dodson to develop the Yerkes-Dodson Law relating arousal to task performance.

The Yerkes National Primate Research Center, which he established, is named in his honor.

Robert M. Yerkes was born on May 26, 1876 on a farm near Philadelphia, Pennsylvania. His early life was of a typical farm boy, spent in work on the farm and playing with animals. Although he had pleasant memories of that life, Yerkes did not have a good relationship with his father, and that motivated him to leave farm life and his father's desire for him to study agriculture. Instead, he chose to study biology and chemistry.

Yerkes received his bachelor's degree from Ursinus College in 1897. He then faced a choice between studying medicine in Philadelphia or graduate work in biology, psychology, and philosophy at Harvard. The decision determined the course of his professional career. Choosing Harvard, Yerkes obtained his Ph.D. in psychology in 1902.

He was then offered a teaching position at Harvard, first as instructor and later as assistant professor of comparative psychology. He taught there from 1902 until 1917. His colleagues on the faculty at Harvard included some eminent scholars: William James, Hugo Münsterberg, Francis Peabody, George Santayana, Dickinson Miller, Robert MacDougall, Edwin B. Holt, and Ralph Barton Perry. Another colleague was John D. Dodson, with whom Yerkes formulated the famous Yerkes-Dodson Law.

In 1905, Yerkes married Ada Watterson, who became an essential part of his professional life, participating together with him in numerous research projects.

Prior to World War I, Yerkes worked closely with John B. Watson to develop the theory of behaviorism. Although Yerkes never subscribed to the strict behaviorism that Watson advocated, correspondence between the two psychologists reveals evidence of a close collaboration and sharing of ideas.

After the war started in 1914, Yerkes joined the army. He served as a researcher for both the army and the navy, working on intelligence tests for recruits, army leadership, and organization.

After the war, Yerkes continued to serve the military until offered a position as professor of psychobiology at Yale University, where he served for twenty years—from 1924 until 1944. Those years were the most fruitful ones in Yerkes' life, filled with research and teaching. He founded the Yale Laboratories of Primate Biology in 1929, and acted as its director until 1941.

Yerkes retired in 1941, but continued to teach at Yale for several more years. He died in 1956.

Based on research in biopsychology and neuroscience, Yerkes and John D. Dodson developed the Yerkes-Dodson Law (Yerkes and Dodson 1908) relating arousal and performance.

However, excessive arousal creates high levels of stress, and then performance suffers. Thus, too much arousal decreases the level of performance, indicating that there is an optimal level of arousal. The law may be graphically described as an inverted U-shaped curve, where performance increases and then decreases with higher levels of arousal. 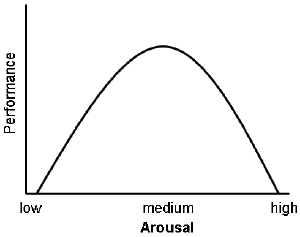 It has also been found that different tasks have different optimal levels of arousal. For example, difficult or intellectually demanding tasks may require a lower level of arousal for optimal performance to facilitate concentration, whereas tasks demanding stamina or persistence may be performed better with higher levels of arousal, which increase motivation.

The effect of the difficulty of tasks led to the hypothesis that the Yerkes-Dodson Law can be decomposed into two distinct factors: The upward part of the inverted U can be thought of as the energizing effect of arousal. The downward part, on the other hand, is caused by the negative effects of arousal (or stress) on cognitive processes, such as attention, memory, and problem-solving.

In 1915, Yerkes helped to create the Yerkes-Bridges Point Scale of Intelligence. In 1917, he served as president of the American Psychological Association (APA), which under his leadership, began several programs devoted to the war effort in World War I. As chairman of the Committee on the Psychological Examination of Recruits, Yerkes developed the Army's Alpha and Beta Intelligence Tests, given to over 1 million United States soldiers during the war.

Test results showed that recent immigrants (especially those from southern and eastern Europe) scored considerably lower than older waves of immigration (from northern Europe), and was used as one of the eugenic motivations for harsh immigration restriction. The results were later criticized as measuring only acculturation, since the test scores correlated very highly with the number of years spent living in the U.S.

Immediately after Word War I, Yerkes worked as a paid officer for the National Research Council (NRC) and took the helm of the NRC Committee for Research in Problems of Sex. This committee helped Yerkes establish close relationships with officers from the Rockefeller philanthropic foundations, relationships that later enabled him to solicit substantial funds for his research on chimpanzees.

Yerkes had a long and storied fascination with the study of chimpanzees. He had spent time observing chimpanzees in Cuba at Madame Abreu's colony in the early 1920s, and had returned from the trip determined to raise and observe chimps on his own. He began by purchasing two chimpanzees, Chim and Panzee, from a zoo. He brought the two chimps home, where they lived in a bedroom and ate with a fork at a miniature table. Chim was a particular delight for Yerkes, and the summer that they spent together is memorialized in Almost Human (1924).

In 1924, Yerkes was hired as a professor of psychobiology, a field that he pioneered, at Yale University. He founded the Yale University Laboratories of Primate Biology in New Haven, followed by his Anthropoid Breeding and Experiment Station in Orange Park, Florida with funds from the Rockefeller Foundation. After Yerkes' death, the lab was moved to Emory University in Atlanta, Georgia and renamed the Yerkes National Primate Research Center. The Great Ape language, "Yerkish," was developed there.

Robert Yerkes remains known for his comparative psychology research with the great apes. His works The Great Apes (1929) and Chimpanzees (1943) were standard texts on these animals for decades. He founded the first primate research laboratory in the United States, serving as its director from 1929 until 1941, and it was renamed the Yerkes National Primate Research Center in his honor following his retirement.

His earlier work, however, used mice and rats, and his book The Dancing Mouse (1907) established their use as standard laboratory subjects in psychology. His research with John D. Dodson established the association between cognitive arousal and task performance, the Yerkes-Dodson Law.

Yerkes' work on psychological testing contributed toward the development of multiple-choice testing and intelligence testing, particularly for use in the military. However, his use of eugenic principles in interpreting his data was erroneous.

Thus, while his research and understanding of non-human primates was exemplary, his experience of differences between species was inappropriately applied to different groups of people. Yerkes did not accept the narrow view of behaviorism his colleague John B. Watson espoused, yet he did not recognize the significant differences between human beings and other creatures.

Retrieved from https://www.newworldencyclopedia.org/p/index.php?title=Robert_Yerkes&oldid=1091596
Categories:
Hidden category:
This page was last edited on 16 December 2022, at 02:18.
Content is available under Creative Commons Attribution/Share-Alike License; additional terms may apply. See Terms of Use for details.