Howler monkey is the common name for the tropical, arboreal New World monkeys comprising the genus Alouatta of the primate family Atelidae, characterized by prehensile, thickly furred tails, completely black faces, a stout build, relatively large size, and loud howling calls. Their loud roars can be heard by humans even three miles away through the dense jungle, and they have been called the loudest animals in the New World (Dunn 2008). Aloutata is the only genus in the subfamily Alouattinae.

There are ten species of howler monkeys (NPRC), ranging from southern Mexico to northern Argentina (Strier 2004). Other members of Atelidae, but in another subfamily, are the spider monkeys, woolly spider monkeys, and woolly monkeys.

Howler monkeys play an important ecological role in the middle of terrestrial food chains, consuming fruit, leaves, flowers, some insects, and other such food while being preyed upon by harpy eagles, jaguars, and other large predators. For humans, they add to the wonder of nature with their unique calls and behaviors. However, various anthropogenic actions, such as habitat destruction and capture for the pet trade or for food, have impacted the populations on howler monkeys. The brown howler monkey (Alouatta guariba) is classified as Vulnerable, while the Coiba Island howler (Alouatta coibensis) is classified as Endangered (Strier 2004). On the other hand, in some localities the removal of top predators, such as the jaguar, have caused too many howler monkeys and consequent disruption of the ecosystems. 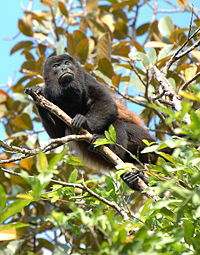 Howlers are called "congos" in Nicaragua and Costa Rica. In Belize, they are called "baboons," although they are not related to the primate which usually carries that name. 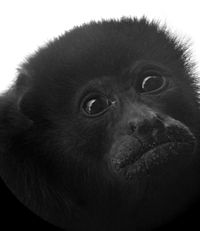 Like many New World monkeys and all atelids (family Atelidae), howler monkeys have prehensile tails. The first 2 fingers of each hand are set apart and are opposable to the other three. Members of Alouatta have completely black faces (Strier 2004). 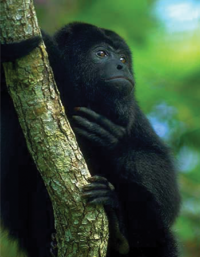 Unlike other New World monkeys, both male and female howler monkeys have trichromatic color vision; that is, they are capable of seeing three colors and all combinations of those colors (Jacobs et al. 1996).

Howler monkeys have a lifespan of 15 to 20 years. They are native to South and Central American forests, and even extend into Mexico in North America. They have the widest distribution in the Atelidae family, ranging from southern Mexico to northern Argentina (Strier 2004). 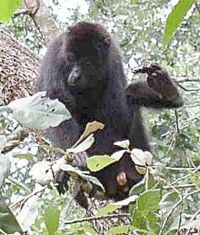 Howler monkeys are arboreal, although they have been observed on the ground for brief periods in order to eat, play, drink, and travel (Strier 2004).

Howler monkeys, by far, are the most folivorous (leaf-eating) of the Atelidae (Strier 2004). Howlers eat mainly top canopy leaves, together with fruit, buds, flowers, and nuts. They need to be careful not to eat too much of certain species of mature leaf in one sitting, as some of the leaves they eat contain toxins that can poison the monkey (Glander 1977).

The slow-moving howler monkeys move quadrapedally and do not brachiate, usually holding on to a branch with at least two hands or one hand and the tail at all times. Their prehensile tails are strong enough to support the monkey's entire body weight, although they seldom do so. They very seldom leave the trees. They rest about 80 percent of the time and are considered the least active of all monkeys.

Howler monkeys typically live in multifemale, multimale groups, although one male, multifemale groups are also common (Strier 2004). Group size varies by species and by location, with an approximate male to female ratio of a male to four females (Sussman 2003). Unlike most New World monkeys, juveniles of both genders emigrate from their natal groups (Sussman 2003), so neither adult males nor adults females in a group are typically related. In the red howler monkeys (Alouatta seniculus), females may be retained by their natal troops, while males may emigrate in pairs to establish new troops together (Strier 2004). While paternal care is not evident among members of the Atelinae subfamily, howler monkeys comprising the Alouattinae subfamily do exhibit some parental care with male howler monkeys caring infants or positioning themselves between infants and threatening extra-troop males (Strier 2004).

Fighting among group members is infrequent and generally of short duration. However, serious injuries can result. Both males and females may fight with each other (Sussman 2003; Crockett 1998).

As their name suggests, vocal communication forms an important part of their social behavior. Specifically, their common name comes from their distinctive loud barking whoop they make, which can be heard over considerable distances. (As correctly pointed out by William Henry Hudson in his novel Green Mansions, "howler" is a misnomer since the male's voice sounds rather like a powerful roar; female vocalizations sound like a pig's grunt). They have an enlarged basihyal or hyoid bone that helps them make their loud sound. They are considered the loudest land animal in the New World (Dunn 2008). 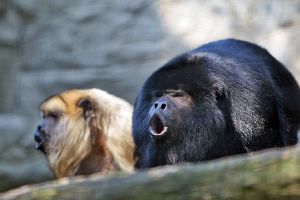 A pair of howler monkeys

While some members of the Atelidae family are popular as pets, howler monkeys, while seldom aggressive, do not take well to captivity and are of surly disposition. However, the black howler (Alouatta caraya) is a relatively common pet monkey in contemporary Argentina due to its gentle nature, in comparison to the capuchin monkey's aggressive tendencies (in spite of its lesser intelligence as well as the liabilities in the way of the size of its droppings and the males' loud vocalization).

Alexander von Humboldt said about howler monkeys that "their eyes, voice, and gait are indicative of melancholy," while John Lloyd Stephens described those at the Maya ruins of Copán as "grave and solemn as if officiating as the guardians of consecrated ground." To the Mayas of the Classic Period, they were the divine patrons of the artisans, especially scribes and sculptors. Copan in particular is famous for its representations of Howler Monkey Gods. Two howler monkey brothers play a role in the sixteenth century myth of the Maya Hero Twins included in the Popol Vuh.

Retrieved from https://www.newworldencyclopedia.org/p/index.php?title=Howler_monkey&oldid=1008799
Categories:
Hidden category:
This page was last edited on 15 January 2018, at 17:44.
Content is available under Creative Commons Attribution/Share-Alike License; additional terms may apply. See Terms of Use for details.