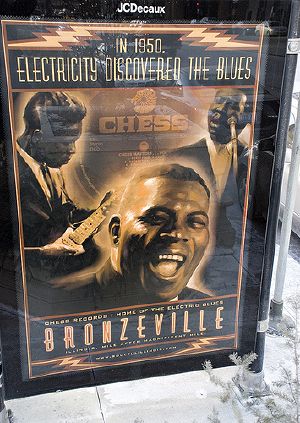 Photo of Howlin' Wolf displayed on a poster outside of the Chess Records studios.

Chester Arthur Burnett (June 10, 1910 – January 10, 1976), better known as Howlin' Wolf or sometimes, The Howlin' Wolf, was an influential blues singer, songwriter, guitarist and harmonica player. Born in Mississippi, he spent his teenage years among the great early Delta bluesmen and became a popular local performer before moving to Chicago and rising to the top of the blues recording business. His large frame, huge voice, and powerful stage presence made him a perennial favorite on the R & B circuit, and he gained additional fame as a result of his songs being covered by such notable 60s acts as the Rolling Stones, Jimi Hendrix The Doors, Cream, and the Yardbirds.

Known as a competent businessman who treated his band members well, he was also a devoted husband to his wife Lillie and his two daughters. His talents as a singer, songwriter, harmonica player, guitarist, and entertainer left one of the greatest legacies of any blues musician.

Born in White Station near West Point, Mississippi, Burnett was called Big Foot and Bull Cow in his early years because of his massive size. The nickname Wolf was given to him rather unkindly by his grandfather after Chester exhibited fear of wolf stories and the moniker stuck, not because the boy liked it, but because it got under his skin.

Burnett's parents broke up when he was young, and he lived with his uncle, Will Young, the upright and stern preacher at the White Station Baptist Church where Wolf sang in the choir. His mother too was a strictly religious woman who earned money as a street singer. Will Young reportedly treated him badly, and when Wolf was 13, he ran away and walked 75 miles barefoot to join his father in the Mississippi Delta near Ruleville. There he finally found a happy home within his father's large extended family.

At this time, Burnett learned the rudiments of the guitar from local resident Charley Patton, one of the earliest Mississippi bluesmen to record. Patton's guff, powerful singing style would also influence Wolf. He was also influenced by the Mississippi Sheiks, Tommy Johnson, Blind Lemon Jefferson and country singer, Jimmie Rodgers, whose famous "blue yodel" Burnett inspired Wolf's own occasional use of falsetto in his singing style. Burnett's harmonica playing was modeled after that of Rice Miller, (also known as Sonny Boy Williamson II) who had lived with Wolf's sister Mary for a time and taught him how to play. Burnett also played with Delta blues legends Robert Johnson, Son House and Willie Brown in his youth.

During the peak of his success, Wolf returned from Chicago to his home town to see his mother again, but was driven to tears when she rebuffed him and refused to take any money he offered her, saying it was from his playing the "Devil's music." Wolf's feelings toward his mother would be poignantly expressed in his song, "Going Down Slow," in which he implores:

Please write my mother, tell her the shape I'm in.
Tell her to pray me for me, forgive me for my sin.

Working as a farmer during the 1930s, Burnett served in the United States Army as a radioman in Seattle during World War II. He reportedly suffered a nervous breakdown in 1943 and was discharged. In 1945 he traveled with Son House and Willie Brown as a professional musician when he was not helping his father on the farm. By 1948 he had formed a band that included guitarists Willie Johnson and Matt "Guitar" Murphy, harmonica-player James Cotton, a pianist who went by the name 'Destruction', and drummer Willie Steele. He also performed on radio broadcasts on KWEM in West Memphis, Arkansas. In 1951 he auditioned for Sam Phillips' Memphis Recording Service. Phillips recognized his talent and recorded "Moanin’ at Midnight” and “How Many More Years” and later releasing the rights for them to Chess Records.

Rise to the top

Already a local celebrity, Wolf signed with Modern Records and to the Chess label in 1951. How Many More Years was released August of that year and reached the “top ten” on the R & B charts. Wolf also recorded sides for Modern with Ike Turner in late 1951 and early 1952. Turner would later claim to be the one who "discovered" Wolf, but Chess eventually won the war over the singer. Wolf settled in Chicago and began playing with guitarist Hubert Sumlin, whose thin, wailing tones and intense, fast-noted solos perfectly complemented Burnett's huge voice and surprisingly subtle phrasing. In the mid-1950s Wolf released "Evil," written by Willie Dixon, and "Smokestack Lightnin'," his own composition, both major R&B hits. He was now at the top of the blues business, rivaled only by Muddy Waters, with whom he shared a competitive and sometimes adversarial friendship.

Like many Chicago bluesmen, he took a back seat to more commercially successful R&B and black rock acts in the late ‘50s, but was one of the first to benefit from the blues revival of the ‘60s. Wolf's 1962 album Howlin' Wolf is one of the most famous and influential blues records. This album contained "Wang Dang Doodle," "Goin' Down Slow," "Spoonful" and “Little Red Rooster,” songs which later found their way into the repertoires of British and American bands infatuated with Chicago blues. Sumlin remained his guitarist except for a brief stint with the Muddy Waters band, and blues piano great Otis Spann can often be heard on Wolf's records. He was also backed by bassist Willie Dixon, who authored such Howlin' Wolf standards as "Spoonful," "I Ain't Superstitious," "Little Red Rooster," "Back Door Man," "Evil," "Wang Dang Doodle" (primarily known as a Koko Taylor hit), and others. In 1965 Wolf appeared on the television show Shindig along with the Rolling Stones, who had covered "Little Red Rooster" on an early album. By the late ‘60s, Wolf was appealing to the white audiences in folk clubs and cutting age rock venues across the nation, as well as traditional R&B haunts.

Unlike many other blues musicians, after he left his impoverished childhood to begin a musical career, Howlin' Wolf was always at least moderately financially successful. He described himself as "the loneliest one to drive himself up from the Delta" to Chicago, in his own car, which he did with four thousand dollars in his pocket—a rare distinction for a bluesman of the time. His success was partly due to his enormous charisma and crowd-pleasing stage presence. However, it was also due to his ability to avoid the pitfalls of alcohol, gambling, and the various dangers inherent, in vaguely described, "loose women," to which so many of his peers fell prey.

Wolf met his future wife, Lillie, while playing in a Chicago club one night when she just happened to attend. She and her family were urban and educated, and not involved to what was generally seen as the unsavory world of blues musicians. Nonetheless, immediately attracted when he saw her in the audience as Wolf says he was, he pursued her and won her over. According to those who knew them, the couple remained deeply in love until his death. They had two daughters, Billye and Barbara.

Lillie, also helped manage his professional finances, and he was so financially successful that he was able to offer band members not only a decent salary, but benefits such as health insurance. This in turn enabled him to hire his pick of the available musicians, and keep his band one of the best around. According to his daughters, he was never financially extravagant, for instance driving a Pontiac station wagon rather than a more expensive and flashy car.

At 6 foot, 3 inches and close to 300 pounds, he was an imposing presence with one of the loudest and most memorable voices of all the "classic" 1950s blues singers. Howlin' Wolf's voice has been compared to "the sound of heavy machinery operating on a gravel road." At the same time, Wolf's external gruffness belied a contrasting gentle, unpretentious, and joyful character that eschewed the tough, sometimes evil, persona often adopted by other bluesmen.

By the late ‘60s and early ‘70s, Wolf had suffered several heart attacks. His kidneys also began to fail him, and thus Lillie administered dialysis treatments for him every three days. Nevertheless, he continued to perform. In 1971, Wolf and his long-time guitarist Sumlin traveled to London to record the Howlin' Wolf London Sessions LP. British blues/rock musicians Eric Clapton, Steve Winwood, Ian Stewart, Bill Wyman and Charlie Watts played alongside him on this album.

“Live and Cookin’ at Alice’s Revisited” was recorded in Chicago in 1972, and his last studio album, “Back Door Wolf” followed the next year. His final performance is legendary, as he joined such other notable blues greats as B.B. King and Albert King, and gave his all in reprising his hits, receiving a five minute standing ovation from the appreciative crowd. He was dead within two months.

Howlin' Wolf, Sonny Boy Williamson (Rice Miller), Little Walter Jacobs and Muddy Waters are usually regarded as the greatest blues artists who recorded for Chess in Chicago. In 2004, Rolling Stone Magazine ranked him #51 on their list of the 100 Greatest Artists of All Time.

Howlin' Wolf's style as a blues performer made full use of his natural talents as a big man with a voice just as large as his body. "Hoy, Hoy! I'm your boy! I got 300 pounds of heavenly joy," Wolf would sing to his delighted audiences. His gyrations and other stage antics made him all the more impressive by his size and charismatic personality.

Famed female blues artist Bonnie Raitt said: "If I had to pick one person who does everything I loved about the blues, it would be Howlin' Wolf... He was the scariest, most deliciously frightening bit of male testosterone I've ever experienced in my life."

But Wolf's appeal went far beyond raw power. His vocals were also masterpieces of phrasing and nuance which never failed in their blues artistry. His performances were among the most dynamic in the business, as he would go from a powerful full throated rendition of "Killing Floor" in one number, leaving him drenched with sweat, only to take a chair and play quiet slide guitar on "Little Red Rooster" on the next, unafraid to express the vulnerability of a man plagued by impotence because his "rooster" was "too lazy to crow for day." A more subtle if less effective slide player than Muddy Waters, Wolf is better known for his harmonica playing, which, while simple, provided many tremendous and memorable solos and riffs.

A consummate entertainer, he filled the stage not only with his physical presence but a spiritual power then inevitably left audiences feeling that they had gotten their money's worth. Songwriter Willie Dixon provided him with wonderful showcase songs that emphasized his stage persona. These and Burnett's own compositions left a tremendous legacy of classic blues songs that have been covered by dozens of top performers and have influenced new generations of blues musicians and singers over the succeeding years.

Numerous artists have recorded cover versions of Howlin' Wolf songs. Some of the better known of these include:

Other acts that have covered Wolf's songs include, George Thorogood Eric Clapton, Robert Cray, PJ Harvey, Steven Seagal, Soundgarden, The Electric Prunes, and many others.