Marcus Antonius Gordianus (January 20 225 – February 11, 244), known in English as Gordian III, was Roman Emperor from 238 to 244. Gordian was the son of Antonia Gordiana and his father was an unnamed Roman Senator who died before 238. Antonia Gordiana was the daughter of Emperor Gordian I and younger sister of Emperor Gordian II. His younger sister was called Gordiana. Very little is known of his early life before becoming emperor. Gordian had assumed the name of his maternal grandfather in 238. During his reign, the empire's defenses were strengthened and relative stability achieved, largely due to the skill of his father-in-law, who acted as his regent. While dealing with a threat to the Eastern provinces of the empire from the Sassanids, Gordian III died or was murdered during a battle with the troops of Shapur I, following several victories. His ashes were taken to Rome, where he was deified. He was succeeded by Philip the Arab, then prefect of the Praetorian Guard.

Gordian III died before he could make much of a mark. For just over half a decade, however, he was one of the most powerful men in the world. As such, he merits more than a footnote in history. Gordian's reign forms part of the declining days of the empire, although in terms of the cultural development of the European space and its debt to Rome, the Empire had yet to develop one of its most significant legacies. It still had to transform itself from a pagan to a Christian state. At the very least, Gordian III helped the empire survive a little longer so that this transformation could occur. Although the Western empire would not last beyond the end of the next century, this was long enough for the Christian Church to lay down foundations that would shape a new Europe. The Europe that emerged from the ruins of the Roman empire cherished common values despite political fragmentation, because its foundation rested on a shared faith rather than on a political structure.

Gordian III became emperor at the beginning of what has been called the "crisis of the third century." It followed the murder of Alexander Severus in 235. This was a period of instability and of short imperial reigns; between 235 C.E. and 284 C.E. no fewer than 25 different emperors ruled Rome. Instability was initially caused by lack of agreed rules of succession, which resulted in competition and conflict between rival claimants after each emperor's death. This seriously weakened the empire, leading to some conquered provinces revolting and inviting invasion from outside. During this period of crises, the empire came close to collapse. External danger came from the Germanic tribes and from the Sassanid Empire. Outbreak of smallpox towards the mid-point of the century did not help. By then, three competing states had formed within the "empire" and it was not until the reign of Aurelian that the empire was re-united.

Following the murder of emperor Alexander Severus in Moguntiacum (modern Mainz) by his own troops, the army proclaimed Maximinus Thrax, an officer who had worked his way up through the ranks. In response to what was considered in Rome as a rebellion, Gordian's grandfather and uncle, Gordian I and II, were proclaimed joint emperors in the Africa Province. Their revolt was suppressed within a month by Cappellianus, governor of Numidia and a loyal supporter of Maximinus Thrax. The elder Gordians died.

Meanwhile, Maximinus was on the verge of marching on Rome and the Senate elected Pupienus and Balbinus as joint emperors. These senators were not popular men and the population of Rome was still shocked by the elder Gordian's fate, so that the Senate decided to take the teenager Gordian, rename him Marcus Antonius Gordianus as his grandfather, and raise him to the rank of Caesar and imperial heir. Pupienus and Balbinus defeated Maximinus, mainly due to the defection of several legions, namely the II Parthica who assassinated Maximinus. Their joint reign was doomed from the start with popular riots, military discontent and even an enormous fire that consumed Rome in June 238. On July 29, Pupienus and Balbinus were killed by the Praetorian guard and Gordian proclaimed sole emperor.

In the space of a few months six princes had been cut off by the sword. Gordian [III], who had already received the title of Cæsar, was the only person that occurred to the soldiers as proper to fill the vacant throne. They carried him to the camp and unanimously saluted him Augustus and Emperor. His name was dear to the senate and people; his tender age promised a long impunity of military license; and the submission of Rome and the provinces to the choice of the Prætorian guards saved the republic, at the expense indeed of its freedom and dignity, from the horrors of a new civil war in the heart of the capital.[1]

His succession was supported by the Senate. Due to Gordian's age (he was 13), the imperial government was surrendered to the aristocratic families, who controlled the affairs of Rome through the senate. In 240, Sabinianus revolted in the African province, but the situation was dealt with quickly. In May 241, Gordian was married to Furia Sabina/Sabinia Tranquillina, daughter of the newly appointed praetorian prefect, Timesitheus. As chief of the Praetorian guard and father in law of the emperor, Timesitheus quickly became the de facto ruler of the Roman empire. They had an only daughter, Furia (b. ca. 244), most likely posthumous, who married Marcus Maecius Orfitus (b. ca. 245), son of Marcus Maecius Probus (b. ca. 220), married to Pupiena Sextia Paulina Cethegilla (b. ca. 225), paternal grandson of Marcus Pomponius Maecius Probus and maternal grandson of Marcus Pupienus Africanus (son of his protector Emperor Pupienus Maximus) and wife Cornelia Marullina, by whom she had issue. Under Timesitheus regency, imperial power was restored vis-a-vis the power of the Senate "but subtly and with sedulous avoidance of any semblance of tyranny."[2] He reorganized the defenses of the North African provinces and elsewhere in the empire, including Dacia. He then turned his attention to the threat from the Sassanids. Alexander Severus was deified during Gordian's reign. 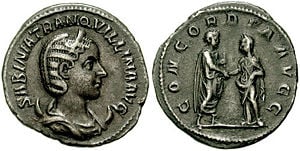 Coin issued to celebrate the marriage of Gordian to Sabina Tranquillina, Augusta.

When the Persians under Shapur I invaded Mesopotamia, the young emperor opened the doors of the Temple of Janus for the last time in Roman history, and sent a huge army to the East. Gordian and "his full court and massive army reached Antioch late in 242."[3] The Sassanids were driven back over the Euphrates and defeated in the Battle of Resaena (243). Several cities were recaptured. The campaign was a success and Gordian, who had joined the army, was planning an invasion of the enemy's territory, when his father-in-law died after what appears to have been an illness. Without Timesitheus, the campaign, and the emperor's security, were at risk.

Marcus Julius Philippus, also known as Philip the Arab, stepped in at this moment as the new Praetorian Prefect and the campaign proceeded. In the beginning of 244, the Persians counter-attacked. Persian sources claim that a battle was fought (Battle of Misiche) near modern Fallujah (Iraq) and resulted in a major Roman defeat and the death of Gordian III. Roman sources do not mention this battle and suggest that Gordian died far away, upstream of the Euphrates. Although ancient sources often described Philip, who succeeded Gordian as emperor, as having murdered Gordian at Dura-Europos or Zaitha (Qalat es Salihiyah), the cause of Gordian's death is unknown. He may have died in battle; his ashes were sent back to Rome.[4] At least one source says that Philip informed Rome by letter that the emperor had died from an illness.[5] Zahran points out that Philip's leisurely journey to Rome to gain the Senate's confirmation of his succession "is not the action of a man rushing to placate the Senate and conceal a crime."[6] According to Dodgeon, the troops built a tomb for Gordian near Circesium, Persia on which they inscribed the words:

Reference to Phillipi was said to be because he had been defeated there. Some interpret this to mean that he had been killed by Philip, However, the inscription was later destroyed by Constantine I's rival, Licinius, who may have claimed descent from Philip, so removed what could be construed as suggesting that he had committed regicide.

Gordian's youth and good nature, along with the deaths of his grandfather and uncle and his own tragic fate at the hands of another usurper, earned him the esteem of the Roman people. Despite the opposition of the new emperor, Gordian was deified by the Senate after his death, in order to appease the population and avoid riots. However, for most of the century, emperors reigned for very short period. Philip the Arab only survived until 249, when he fell in battle to a usurper. Philip may have the distinction of being Rome's first Christian emperor, although he did not legalize the faith. That task fell to Constantine I. His son was murdered the same year. Gordian III did not really have time to leave his mark on history, even though he was for just over half a decade one of the most powerful men in the world at the time.

Gordian's reign forms part of the declining days of the empire, although in terms of the cultural development of the European space and its debt to Rome, the Empire had yet to transform itself from a pagan to a Christian state. Gordian III, at the very least, symbolically headed and to some degree enabled the survival of what was culturally a unified space, across which religious beliefs, philosophical ideas and many common values bound people together. It would take almost half a century until political unity would be restored. The next century would see the legalization of Christianity (313) followed by the Church's establishment as the state religion (380). The Western empire only survived the onslaught of pagans from over its borders for another century. By then, the Church had taken root and was mature enough as an institution to shape a new Europe from the ruins of the Roman world. Effectively, it was the only institution strong enough to restore order to Europe after the end of the Roman period. Southern comments that with the reign of Gordian III, the "main sources for the history of Rome" either end of "lose themselves in fantasy." Consequently, there is some doubt about the identity of his mother while even his father's name is unknown, although he was of senatorial rank.[8] and no agreement about how he died. She refers to four different accounts, commenting "so it seems that even the historians were not sure of the facts."[9]

Retrieved from https://www.newworldencyclopedia.org/p/index.php?title=Gordian_III&oldid=1092361
Categories:
Hidden category:
This page was last edited on 22 December 2022, at 02:07.
Content is available under Creative Commons Attribution/Share-Alike License; additional terms may apply. See Terms of Use for details.