Guizhou ▶ (Simplified Chinese: 贵州; Traditional Chinese: 貴州; pinyin: Gùizhōu; Wade-Giles: Kuei-chou; also spelled Kweichow) is a province of the People's Republic of China located in the southwestern part of the country. Guizhou borders Sichuan province and Chongqing municipality to the north, Yunnan province to the west, Guangxi province to the south and Hunan province to the east. Its provincial capital city is Guiyang.

Guizhou sat on the fringe of the Chinese empire until the Ming dynasty. Ming's incorporation of Guizho into the Ming dynasty led to a flood of Han Chinese into Guizhou, setting the stamp on the region as an ethically diverse province. Although suffering from a lack of adequate education, and sitting landlocked with much of the country mountainous, Guizhou has natural resources of water and oil plus other minerals in abundance. The province is shaking off the mantle of communism wore during the era of communism in China and beginning to develop.

Guizhou was well known by the Chinese for thousands of years, but it was not until the Ming dynasty that it came under Chinese domination, during which it was made into a province. This prompted mass migration of Han Chinese from the neighboring provinces of Sichuan, Hunan and other provinces into Guizhou. 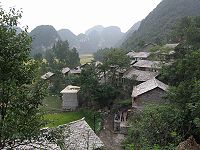 In 1935, Mao Zedong became the leader of the Chinese Communist Party at a conference in Zunyi, which is located in the north of the province. The Japanese invasion during the years of 1937-1945 forced the nationalist Kuomintang government to retreat to the southwest, bringing Guizhou into prominence and promoting its development under the communists.

Guizhou is a mountainous province, however most of the hilly areas are concentrated in the west, while the eastern and southern portions are relatively flat. The western part of the province forms part of the Yunnan-Guizhou Plateau.

The total area of the province is 170,000 square kilometers. Amidst the towering mountains and deep valleys, there are over 300 basins which are wide in the middle and narrow at both ends. Most of these basins measure over 160 hectares. 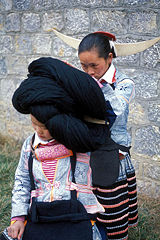 The long-horn tribe, one of the small branches of Miao living in the twelve villages near Zhijing (织金) County, Guizhou Province. The wooden horns remain daily attire for most women.

Guizhou is a relatively poor and undeveloped province. It also has a small economy compared to the other coastal provinces, which are much more affluent. Its nominal GDP for 2004 was 159.2 billion yuan (19.75 billion USD). Its per capita GDP of 3568 RMB (470 USD) ranks last in all of the PRC Guizhou's natural industry includes timber and forestry. Other important industries in the province include energy (electricity generation) and mining, especially in coal, limestone, arsenic, gypsum, and oil shale. year. [1]

Guizhou enjoys ample precipitation and has a complete water system. Rivers flow through its steep terrain, resulting in drastic fall of the waters which gives rise to a hydro-power generating resource of 18.74 million kw, putting the province at sixth place in the country. For each square kilometer, hydro-power resources amount to 106,000 kw, which is the third largest total in the nation. The province is also rich in gas stored in coal reserves. With a reserve of 241.9 billion tons of coal, Guizhou has been known as the "home of coal" in south China. Guizhou's total output of coal was 110 million tons in 2005, a 12 percent growth from the previous year. The combination of abundant water and coal reserves allows for the development of water and coal energy at the same time, which makes Guizhou an important province for the People's Republic of China, despite its struggling economy.

As one of the great reserves of minerals in China, Guizhou boasts more than 110 kinds of minerals. The province is particularly strong in its reserves of phosphorus, mercury, aluminum, manganese, antimony, gold, barite, raw materials for cement and bricks, as well as dolomite, sandstone and limestone. Its phosphorus reserve accounts to 44 percent of the national total while the mercury reserve, after long years of tapping, still makes up 38 percent of the total amount in the country. The newly discovered gold reserve of 150 tons offers the country another gold production base.

While Guizhou has plentiful reserves of raw materials, it has been faced with several problems which have set back its economic development and prevented it from reaching the higher economic status of the other coastal provinces of China. Its uneven topography, landlocked situation, difficult traffic access, and the late development of its economy, combined with the big size of the population, (especially the large proportion of poor within the population) all serve as important constraining factors to the social and economic development of the province. Guizhou is a province that contains a variety of different minority groups. These minority groups account for more than 37 percent of the total population and they include the Yao, Miao, Yi, Qiang, Dong, Zhuang, Buyi, Bai, Tujia, Gelao and Shui people. The population concentration of these minority groups is so high that 55.5 percent of the province area is designated as an autonomous region for them. In total, there are 49 different ethnic groups in Guizhou. In addition to its ethnic diversity, Guizhou is also the province with the highest total fertility rate, measuring 2.19. (In the urban areas it is 1.31, while in the rural areas it is 2.42. [2]

Guizhou's education level is unfortunately on par with its relatively low economic status. As of 2000, there were 24 higher education institutions with 75,493 students and 7,240 teachers, 2,315 medium education institutions with 1,771,953 students and 93,152 teachers, and 17,985 primary schools with 5,002,082 pupils and 174,822 teachers. The general feature of change in terms of education for the Guizhou population is that the percentage of the educated population at different levels has increased year by year while that of the illiterate and semi-literate population has declined. The enrollment rate of school-age children is 98.5 percent, and there has only been limited development in adult education. 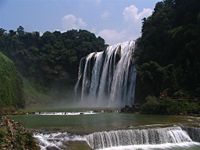 Huangguoshu Waterfall, the largest in China. 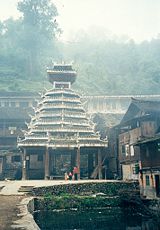 Drum tower in the Dong village of Zhaoxing, southern Guizhou.

Guizhou province is unfamiliar to many travelers and tourists, but the natural scenery, remarkable national customs, brilliant history, culture and the pleasant climate combine to form a unique landscape which is attracting more and more tourists, both domestic and international, every year. Maolan Karst Forest Natural Conservation, which contains mountains, water, forests and caves all in the same location is a major tourist site, as is Huangguoshu Waterfall. Huangguoshu is the biggest waterfall in China, measuring measuring 74 meters tall and 81 meters wide, and it is one of the most famous waterfalls in the world.

In addition to this, the province is well-known for its many covered bridges, called Wind and Rain Bridges. These bridges were built by the Dong minority people, whose unique minority culture provides an interesting experience in the southeeastern corner of the province.

Guizhou is the home of the Moutai Distillery, the distillers of Maotai liquor which is China's most famous alcoholic beverage. The Chinese name of the distillery is Zhongguo Guizhou Maotai Jiuchang.

The rich population of minorities in Guizhou allow for a variety of ethnic festivals throughout the lunar calendar, and the synthesis of their various practices provides Guizhou with an interesting and unique culture compared to other parts of China. During the first lunar month (usually February), the early festival in Kaili (east of Guiyang) celebrates local culture with acts of bullfighting, horse racing, pipe playing, and comedy. In total, there are over 100 festivals celebrated by Guizhou's minority ethnic groups, and some of the more notable ones include:

Retrieved from https://www.newworldencyclopedia.org/p/index.php?title=Guizhou&oldid=1061090
Categories:
Hidden category:
This page was last edited on 3 December 2021, at 22:02.
Content is available under Creative Commons Attribution/Share-Alike License; additional terms may apply. See Terms of Use for details.