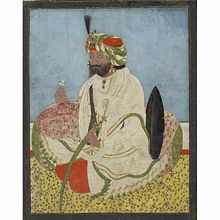 Gulab Singh of Kashmir.
From the collection of the V&A Museum.

Gulab Singh (1792-1857) was the founder and first Maharaja of the princely state of Jammu and Kashmir during the British Raj in India. Gulab Singh founded a dynasty that was to rule the state, the second-largest principality under the British Raj, until India gained its independence in 1947. Within the history of the kingdom of Punjab Gulab Singh is distinquished with his brothers for their loyalty to Ranjit Singh. After the death of Ranjit Singh the Lahore Court fell into confusion and intrigue in which all the Dogra sardars expect Gulab Singh were killed by treachery of the Sandhanwala Sikh sardars who were in secret communication with the British. Ranjit’s Punjab was annexed by the British in 1849 but under the dynasty founded by Gulab Singh, Kashmir remained a self-governing state within the British Empire for another century. However, the option of becoming an independent nation after the end of British rule was not recognized and Kashmir became contested space between India and Pakistan. Although the ruling family was Hindu, the majority of the population was and remains Muslim. Consequently, both of the new states felt that they had a claim on Kashmir. The end of princely rule has seen consecutive wars fought by its neighbors, and the land was itself divided in 1949. Historically, however, it was renowned not only for its outstanding natural beauty but also for the good relations between its different communities, many of whom spoke of their Kashmiri identity taking priority over other identities.

Gulab Singh was born on October 18, 1792, a scion of the Jamwal clan of Rajputs. His father, Kishore Singh, was a distant kinsman of Jit Singh, the Raja of Jammu. In 1808, as a 16-year-old youth, Gulab Singh fought alongside his clansmen in defending Jammu unsuccessfully against a Sikh invasion sent by Emperor Ranjit Singh. Following this defeat, the Raja of Jammu had internal autonomy of the principality, which became a tributary of the Sikh Empire. Later (c. 1812), Gulab Singh enlisted in Emperor Ranjit Singh's army, becoming the commander of a Dogra cavalry contingent. He distinguished himself in several campaigns, including the conquest of Multan (1816). He also led an independent campaign in 1816 to conquer the hill-town of Reasi.

In 1816, following another conflict, Jammu was annexed by Ranjit Singh. Raja Jit Singh, who was expelled, found refuge in British India, and later received in appendage the estate of Akhrota. Ranjit Singh appointed a governor to administer the newly conquered area which was expanded in 1819 with the annexation of Kashmir by a Sikh force. In 1820, in appreciation of services rendered by the family, and by Gulab Singh in particular, Ranjit Singh bestowed the Jammu region as a hereditary fief upon Kishore Singh. Apart from their sterling services, the family's intimate association with the region commended Kishore Singh's candidature to the Lahore court.

In 1821, Gulab Singh captured conquered Rajaori from Aghar Khan and Kishtwar from Raja Tegh Muhammad Singh. That same year, Gulab Singh took part in the Sikh conquest of Dera Ghazi Khan. He also captured and executed his own clansman, Dido Jamwal, who had been leading a rebellion against the Sikhs.

Kishore Singh died in 1822 and Gulab Singh was confirmed as Raja of Jammu by his suzerain, Ranjit Singh. Shortly afterwards, Gulab Singh secured a formal declaration of renunciation from his kinsman, the deposed Raja Jit Singh. The declaration drafted in Persian, reads:

"I, Raja Jit Singh, grandson of Raja Sahib Ranjit Devji, on this occasion and out of internal inclination and dignified favors, in my own lifetime, and as a token of intrinsic love and heartfelt affection, hereby renounce proprietorship to all the protected territories of my ancestors, and my own inheritance, in favor of my prosperous barkhurdar, Raja-i-Rajgan Raja Gulab Singhji, and Raja Sahib Dhian Singhji and Raja Suchet Singhji, by way of dharam and niyam, mutual agreement and on oaths of my predecessors and Thakurs and Gurus." Thus, the declaration transferred the headship of the Jamwal Rajputs to a junior branch of that clan.

In 1824, Gulab Singh captured the fort of Samartah, near the holy Mansar Lake. In 1827, he along with the Sikh chief Hari Singh Nalwa, fought and defeated a horde of Afghan rebels led by the fanatic Sayyid Ahmed at the Battle of Saidu. Between 1831-1839 Ranjit Singh bestowed on Gulab Singh the royalty of the salt mines in northern Punjab, and the nearby Punjabi towns like Bhera, Jhelum, Rohtas, and Gujrat.

On the death of Ranjit Singh in 1839, Lahore became a center of conspiracies and intrigue in which the three Jamwal brothers also became involved. They succeeded in placing the administration in the hands of Prince Nao Nihal Singh with Raja Dhian Singh as prime minister. However in 1840, during the funeral procession of his father, Nao Nihal Singh died when an old brick gate collapsed on him. Gulab Singh’s son Udham Singh also died in this accident (the town of Udhampur in J&K is named after him).

In January 1841, Sher Singh, reputed son of Ranjit Singh, tried to seize the throne of Lahore but was repulsed by those loyal to Nao Nihal’s mother, Chand Kaur. The defense of the fort was in the hands of Gulab Singh. Although outnumbered, Singh’s forces with their European artillery commander Alexander Gardner conducted defended themselves with efficient and controlled gunfire which resulted in Sher Singh’s retreat. A peace agreement was then made between the two sides and Gulab Singh and his men were allowed to leave with their weapons. On this occasion, he is said to have taken away a large amount of the Lahore treasure to Jammu. Subsequently, Gulab Singh conquered the fort of Mangla (near the present Mangla Dam on the Jhelum River).

In all, this time a large part of the Dogra army had been engaged in trans-Himalayan conquests. General Zorawar Singh, governor of Kishtwar, had conquered the Suru valley and Kargil (1835), the rest of Ladakh (1836-1840), and Baltistan (1840). These conquests had alarmed Mian Singh, the Sikh governor of Kashmir, who complained to Prince Nao Nihal Singh that “Zorawar Singh, agent of Raja Gulab Singh was obtaining complete possession of Baltistan” (Punjab Akhbars, 20th July 1840). The Dogra campaign threatened the Sikh position in Kashmir and Gilgit and so Zorawar Singh turned his attention east to the conquest of Tibet.

In May 1841, the 5,000–strong Dogra army supplemented by contingents of Kishtwaris, Ladakhis, and Baltis (raising the strength of the army to 7,000) advanced eastwards in three divisions. Overcoming all the Tibetan and Chinese opposition, they set up base at Taklakot near the holy Mansarovar Lake in September 1841, after traversing a distance of 450 miles from the Indian frontier. With the onset of severe winter the Dogras began falling one-by-one to the extreme cold and the lack of provisions, many burning the stocks of their muskets in futile attempts to warm themselves, and were overcome by a Sino-Tibetan force on 12 December 1841. Survivors of this campaign crossed over the Himalayas south to the British territories. Gulab Singh who was then in Peshawar leading the Anglo-Sikh campaign in Afghanistan was informed of this disaster by Henry Lawrence.

The Tibetans and their Chinese allies then invaded Ladakh but were defeated by the Dogras at the Battle of Chushul. The boundary between Ladakh and Tibet was finally settled by the Treaty of Chushul. This treaty was later violated by the communist rulers of China in the 1950s. 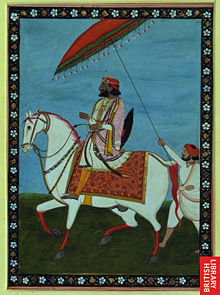 Meanwhile in the continuing intrigues at Lahore the Sandhawalia Sardars (related to Ranjit Singh but now secretly allied to the British) murdered Raja Dhian Singh and the Sikh Maharaja Sher Singh in 1842. Subsequently, Gulab Singh’s youngest brother, Suchet Singh, and nephew, Hira Singh, were also murdered. As the administration collapsed the Khalsa soldiery clamored for the arrears of their pay. In 1844 the corrupt Lahore court commanded an invasion of Jammu to extract money from Gulab Singh, reputed to be the richest Raja north of the Sutlej River.

However the invasion failed to capture the forts of Jammu and the Khalsa made peace with Raja Gulab Singh and agreed to negotiate on his behalf with the Lahore court. These negotiations imposed an indemnity of 27 lakh Rupees on the Raja. In the subsequent Anglo-Sikh wars Gulab Singh kept himself neutral. Under the Treaty of Lahore the defeated Lahore court transferred Gulab Singh’s kingdom and the adjoining hilly regions of Hazara, Gilgit, Kashmir, and Chamba to the British in lieu of the war indemnity.

Lacking the resources to occupy such a large region immediately after annexing portions of Punjab, the British recognized Gulab Singh as a Maharaja directly tributary to them on payment of 75 Lakh of the war-indemnity (this payment was justified on account of Gulab Singh legally being one of the chiefs of the Kingdom of Lahore and thus responsible for its treaty obligations). The angry courtiers of Lahore (particularly the Brahmin Sikh, Lal Singh) then incited the governor of Kashmir to rebel against Gulab Singh but this rebellion was defeated.

This arrangement was formalized in the Treaty of Amritsar in 1846. However Gulab Singh was still sympathetic to the Sikh soldiers, even though he was antagonized from the Lahore court. In the second Sikh War of 1849 he allowed his Sikh soldiers to desert and go to fight alongside their brethren in Punjab. The treaties of Chushul and Amritsar had defined the borders of the Kingdom of Jammu in the east, south and west but the northern border was still undefined. In 1850 the fort of Chilas in the Dard country was conquered. Gilgit was lost to rebellion in 1852 but was recovered ten years later by his son.

Maharaja Gulab Singh died on June 30, 1857 and was succeeded by his son, Rambir Singh. 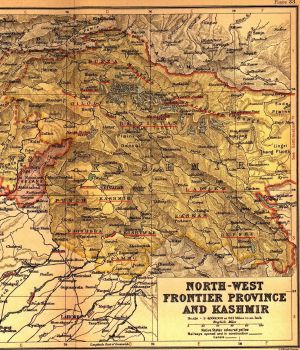 The Princely State of Kashmir and Jammu in 1909

Gulab Singh managed to preserve and expand his kingdom which was maintained by his successors until 1947-1948. He pushed the boundaries of India into Tibet and Xinjiang, and brought them within range of Central Asia and Afghanistan. The state was ranked in the top-five of the 120 "salute states," which meant that its ruler was entitled to a 21-gun salute. The last Maharajah initially wanted to create an independent state but was pressured to choose to become part of either India or of Pakistan. Fearing insurgents aided by Pakistan, who invaded in 1947, he opted for India although a plebiscite, which should have been held according to the rules governing the future of the former principle states (and for which the United Nations has subsequently called has never taken place. Kashmir became a divided and contested space.

Retrieved from https://www.newworldencyclopedia.org/p/index.php?title=Gulab_Singh&oldid=1005618
Categories:
Hidden category:
This page was last edited on 18 July 2017, at 19:16.
Content is available under Creative Commons Attribution/Share-Alike License; additional terms may apply. See Terms of Use for details.