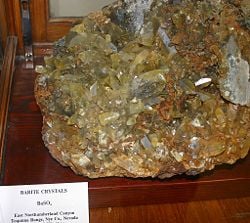 Barite (British spelling Baryte), also called heavy spar, is a mineral that is widely distributed around the globe. Chemically, it consists of crystals of barium sulfate (BaSO4). The pure crystals are white or colorless, but the mineral acquires various colors based on impurities it contains.

This mineral is the main source of barium and its compounds. When crushed, it is used as an aggregate in a "heavy" cement, and the finely ground material is used as a filler in such products as paper, textiles, plastics, and rubber. In addition, it is an ingredient in paints and in a type of mud used for sealing petroleum wells during drilling. 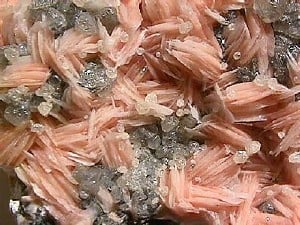 Crystals of barite (pink) mixed with cerussite (clear) from Morocco. 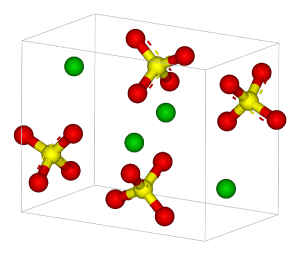 The unit cell in barite crystals. 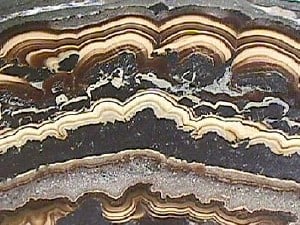 Barite (cream and brown bands) with galena (silvery) and hematite from Poland.

Barite commonly occurs in lead-zinc veins in limestones, in hot spring deposits, and with hematite ore. It is often associated with the minerals anglesite and celestine.

The name barite is derived from the Greek word βαρύς, meaning "heavy." The radiating form, sometimes referred to as Bologna Stone, attained some notoriety among alchemists for the phosphorescent specimens found in the 1600s near Bologna, Italy by Vincenzo Cascariolo.

Barite has an orthorhombic crystal structure. It is practically insoluble in water and in most other chemical reagents. It has a Mohs hardness of three. Its refractive index is 1.63, its specific gravity is in the range of 4.3-5. Under arid, sandy conditions, crystals of barite (or gypsum) may form a rosette structure embedded with sand grains, and this structure is colloquially referred to as a desert rose.

In commerce, the mineral is sometimes referred to as "barytes." The first marketable product, called primary barite, includes crude barite (run of mine) and the products of simple treatments such as washing, jigging, separation of heavy media, tabling, flotation, and magnetic separation. Most crude barite requires some upgrading to minimum purity or density.

Barite is the main source of barium and its compounds. It may be used as an aggregate in a "heavy" cement, for which it is crushed and screened to a uniform size. Most barite is ground to a small, uniform size and then used as a filler in the production of such goods as paper, textiles, linoleum, rubber, and plastics. In addition, it is used in paints and in a special type of mud for sealing petroleum wells in the course of drilling.

Although barite contains barium, which is a "heavy" metal, it is not considered a toxic chemical by most governments because of its extreme insolubility.