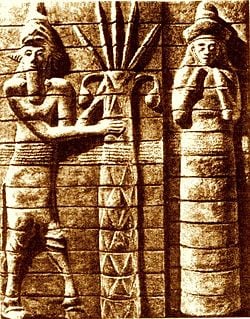 Ninhursag with the spirit of the forests next to the seven spiked cosmic tree of life. Relief from Susa. (Some believe the goddess here is not Ninhursag but Ninlil.)

In Sumerian mythology, Ninhursag (NIN.URSAG) was the earth and mother goddess, one of the major deities of ancient Sumer. Also known as Nintu and sometimes identified with Ki, she was principally a goddess of fertility and sacred mountains. Temple hymn sources identify her as the "true and great lady of heaven," and kings of Sumer were "nourished by Ninhursag's milk."

One of the oldest of the Mesopotamian gods, Ninhursag both subsumed the characteristics of similar deities like Ki (earth) and others, and was later herself subsumed by the fertility goddess Inanna/Ishtar. She is known to have had temples at Eridu and Kish, and other locations.

She is typically depicted wearing a horned head-dress and tiered skirt, often with bow cases at her shoulders, and not infrequently carries a mace or baton surmounted by an omega motif or a derivation, sometimes accompanied by a lion cub on a leash. She is the tutelary deity to several Sumerian rulers.

In the myth of Enki and Ninhursag, she heals the major deity Enki of a dreadful disease and gives birth to eight more gods, including Ninti, the "Lady of the Rib." In the flood story of Atrahasis, as the "womb-goddess" Nintu, she is chosen by the other gods to be the creator of humankind, whom she fashions out of a mixture of blood and clay. Analysts have noted numerous parallels between myths involving Ninhursag and the Genesis account in the Bible, including the story of Adam and Eve in the Garden of Eden. 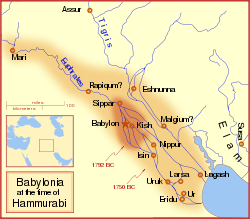 Map of ancient Mesopotamia: Ninhursag is known to have had temples at Eridu and Lagash in the south, and Kish, near Babylon.

Ninhursag means literally "Lady of the Mountain," from the Sumerian Nin ("lady") and Ḫursag ("sacred mountain"). She had many august titles, including Ninmah ("Great Queen"), Nintu ("Lady of Birth"), Mama or Mami (Mother), Sister of Enlil, and Belet-Ili (Lady of the Gods). Minor titles applied to her include Ninzinak (Lady of the Embryo), Nindim (Lady Fashioner), Nagarsagak (Carpenter of Insides), Ninbahar (Lady Pottery), Ninmag (Lady Vulva), Ninsigsig (Lady of Silence), Mudkesda (Blood-Stauncher), Amadugbad (Mother Spreading the Knees), Amaududa (Mother Who Gives Birth), Sagzudingirenak (Midwife of the Gods), and Ninmenna (Lady of the Diadem).

According to one legend, her name was changed to Ninhursag from Ninmah by her son Ninurta in order to commemorate his creation of the mountains. In one Babylonian investiture ritual, as Ninmenna (Lady of the Diadem), she placed the golden crown on the king in the Eanna temple.

Some take the view that Ki (earth), the primordial goddess of the earth and consort of An (heaven), was identical to or an early form of Ninhursag. Ki does not seem to have been regarded as a deity in her own right and there is no evidence of a distinct cult for her. Arguing against Ki's identity with Ninhursag is the fact that Ki is depicted as the the mother of Enlil, whereas Ninhursag is usually his sister. This type of confusion, however, is not unusual in ancient Mesopotamian mythology, in which variants of myths are common and deities often exchanged characteristics with one anther over time.

Some of the titles above were once associated with apparently independent goddesses, such as Ninmah and Ninmenna, who later became identified and merged with Ninhursag. She also seems to have been sometimes identified with Ninsar (Lady Greenery), Ninkurra (Lady Pasture), and Uttu (the Spinner), who are her daughters in the tale of Enki and Ninhursag.

In later Mesopotamian religion, many of Ninhursag's own characteristics were attributed to Inanna/Ishtar, the goddess of love, fertility, and war.

In the writings of the Akkadian princess and priestess Enheduanna, Ninhursag/Ki was one of the most powerful images of the Divine Feminine. She was depicted as Nammu's daughter. Together with the sky god Anu, Ninhursag/Ki was conceived in Nammu's oceanic womb. Anu and Ninhursag came to life embracing each other within the primeval sea. Ninhursag/Ki is thus both sister and consort to Anu, and the two of them became the parents the Anunnaki], the ancient deities of Sumerian myth. As the universe continued to evolve, Ninhursag came to rule more the rocky mountains and sacred hills.

In the text Creator of the Hoe, Ninhursag accomplished the birth of mankind after the heads of humans had been uncovered by Enki's hoe, the crucial instrument of farming, which he had invented.

In the legend of Atrahasis, Ninhursag appears as Nintu/Mami, the womb-goddess. She is chosen by the gods to create humans in order to relieve the gods from their work of digging canals and farm labor. She shapes clay figurines mixed with the flesh and blood of a slain minor deity, and ten months later, humans are born. Later, when over-population becomes a problem, Ninhursag sees to it that one third of human pregnancies will not succeed. She also institutes celibacy among certain priestesses in order to help keep the population down.

In other creation texts, Ninmah/Ninhursag acts as a midwife, while the mother goddess Nammu, the primeval sea goddess, makes different kinds of human individuals from lumps of clay at a feast given by Enki to celebrate the creation of humankind. 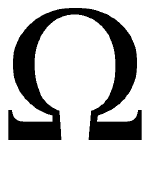 Omega was the Ninhursag's symbol long before the creation of the Greek alphabet.

Ninhursag's symbol, the omega (Ω), has been depicted in art from around 3000 B.C.E., though more generally from the early second millennium. It appears on some boundary stones, on the upper tier, indicating her importance.

Her temple, the E'Saggila (from Sumerian E = House, SAG = Sacred, Ila (Akkadian) = Goddess), was located on the sacred mound of Eridu. She also had a temple at Kish and Lagash.

In art, Ninhursag is often depicted with a tiered skirt, often with a horned head-dress. She sometimes carries bow cases at her shoulders, and/or a mace or staff with an omega motif at its top. She is sometimes accompanied by a lion cub on a leash. Many of these characteristics were also taken on by later goddesses such as Ninlil and Inanna, making it difficult to distinguish them from Ninhursag in iconography.

Excerpts from Enki and Ninhursag

Enki… toward Ninhursag (Nintu), the country's mother, Enki… was digging his phallus into the dikes, plunging his phallus into the reedbeds. The goddess pulled his phallus aside and cried out: "No man take me in the marsh." Enki cried out: "By the life's breath of heaven I adjure you. Lie down for me in the marsh, lie down for me in the marsh, that would be joyous." ... she conceived... But her one month was one day, but her two months were two days… The mother of the country, like juniper oil, gave birth to Ninsar. In turn Ninsar went out to the riverbank. Enki was able to see up there from in the marsh… He clasped her to the bosom, kissed her, ... and she conceived…. Ninsar… gave birth to Ninkurra. In turn Ninkura went out to the riverbank… She gave birth to Uttu, the exalted woman. Ninhursag (Nintu) said to Uttu: "Let me advise you, and may you take heed of my advice… Enki is able to see up here. He will set eyes on you." 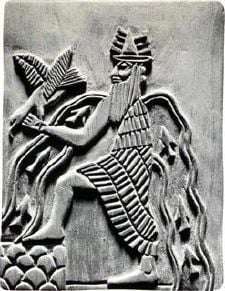 Enki, the god of wisdom and fresh water, was Ninhursag's consort, whom she healed through a process of rebirthing his various diseased body parts, giving birth to eight additional divine children.

…Enki made his face attractive and took a staff in his hand. Enki came to a halt at Uttu's, knocked at her house: "Open up, open up." (She asked): "Who are you?" (He answered): "I am a gardener. Let me give you cucumbers, apples, and grapes for your 'Yes'." Joyfully Uttu opened the house… Enki aroused Uttu. He clasped her to the bosom, lying in her crotch, fondled her thighs, fondled her with the hand. He made love to the young female and kissed her. ... Uttu, the beautiful woman, cried out: "Woe, my thighs." She cried out: "Woe, my liver. Woe, my heart."

Ninhursag and the Bible

Some commentators see the Bible's Eve as related to Nin-ti, Ninhursag daughter known as the "Lady of the Rib."

Several comparisons have been made between the mythology of Ninhursag and the story of Adam and Eve in the Bible. Some scholars hold that the idea of an Edenic paradise is of Sumerian origin. It was known as Dilmun, the land of Ninhursag, Enki, and the other immortals. Significantly, in the Bible, both the Tigris and Euphrates are mentioned in reference to the location of the Garden of Eden, where God walked the Earth.

Other creation stories involving Ninhursag speak of her as creating humans out of clay, paralleling God's creation of Adam out of clay in the Book of Genesis. In the legend of Atrahasis, she controls population growth after the Great Flood; in Genesis, God does something similar by shortening humans' lifespan after Noah's Flood.

Additional parallels are seen between the Genesis account and the myth of Enki and Ninhursag. Enki, the god of fresh water, and Utu, the god of the sun, cooperate to bring life-giving water to Dilmun, a process suggestive of the biblical creation account: "There went up a mist from the earth and watered the whole face of the ground" (Genesis 2:6). The Sumerian myth specifies that Ninhursag gives birth to her children easily and without pain. This contrasts with God's curse upon Eve to give birth in pain after the Human Fall, similar to Uttu's birth pangs after she leaves the marshes and conceives Enki's child on dry land. Meanwhile, Enki's lust for sex and his eating of the sacred plants in the Sumerian paradise, after which he is cursed by Ninhursag, echoes Adam and Eve's eating of the forbidden fruit in the Garden of Eden, after which they are cursed by God. Finally, in the Sumerian myth one of Enki's diseased body parts that Ninhursag heals and conceives through was his rib. Ninhursag soon gives birth to Nin-ti, ("Lady Rib"), a motif that is echoed in the Biblical story of Eve, who was taken from Adam's rib.