DINGIR, the Sumerian cuneiform symbol for An and for deity in general.

In Sumerian mythology and later in the religions of Assyria and Babylonia, Anu (also An—from Sumerian An = sky, heaven) was a sky-god and the chief deity, who ruled over the highest spiritual realm. He was the son of the first pair of gods, Ansar and Kisar, and the descendant of the primordial beings Apsu and Tiamat. Anu was described as the father of the 50 "great gods," as the god of heaven, lord of constellations, king of gods, and the father of spirits and demons. He was part of the most important trinity of deities, together with Enlil and Ea (Enki), who governed the spiritual heaven, the sky and earth, and the waters, respectively.

Known as "An" in ancient Sumer, Anu dates back to at least 3,000 B.C.E. in the archaeological record, making him one of the oldest of the gods. Like his Canaanite counterpart El, he was once known as the Great Bull. His original center of worship was probably the sacred city of Uruk (Erech), in the southern herding area of today's Iraq.

The patron of kings, Anu dwelt in the highest heavenly regions. It was believed that he had the power to judge those who had committed crimes, and that he had created the stars as soldiers to destroy the wicked. Although he was the highest god, Anu actually played a relatively small role in the everyday religion of Mesopotamia. After the reign of Hammurabi, he retired to the highest heaven and was replaced as king of the gods by Marduk. His attribute was the royal tiara, most times decorated with two pairs of bull horns.

Anu and the other gods

"An" can be translated from the Sumerian as "high one." The name later became synonymous with "god," just as "El" did in the semitic languages. An is portrayed in Sumerian cosmogony as a dome that covered the flat earth. Outside of this dome was the primordial body of salt water personified as Tiamat (not to be confused with the Subterranean "Apsu"). [1]

In Sumerian, the designation "An" was also used interchangeably with "the heavens" so that in some cases it is doubtful whether the god An or the heavens is being denoted. In the old-Babylonian period, i.e. before Hammurabi, Anu was regarded as the god of the heavens and the chief god. 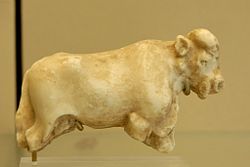 Bull sculpture from Uruk, c. 3000 B.C.E. An/Anu, was once known as the Great Bull, and Uruk was his sacred city.

According to legends, heaven and earth were once inseparable until An and Ki bore Enlil, god of the air, who cleaved heaven and earth in two. An and Ki were, in some texts, identified as brother and sister, being the children of Anshar and Kishar. Ki later developed into the Akkadian goddess Antu, who seems to have been identified with Innana/Ishtar.

Anu was one of the oldest gods in the Sumerian pantheon. He was the first named in the primary triad of gods including himself (the god of the high heavens), Enlil (god of the sky and the earth), and Enki/Ea (god of water). Originally known as "An" in Sumerian, he was called Anu by the Akkadians, rulers of Mesopotamia after their conquest of Sumer in 2334 B.C.E. by King Sargon of Akkad.

By virtue of being the first figure in the triad consisting of Anu, Enlil, and Ea, Anu came to be regarded as the father and king of the gods. In the Epic of Gilgamesh it is to Anu that the gods turn when they learn of King Gilgamesh's youthful follies and seek to create a human rival who equals the hero in strength. Anu authorizes them to create the wild man Enkidu to teach Gilgamesh that his power is not unlimited and ultimately to show him his own mortality.

Together with his daughter Ishtar, Anu is prominently associated with the E-anna temple in the city of Uruk (biblical Erech) in southern Babylonia. In the Epic of Gilgamesh, Ishtar appeals to her father Anu to send the Bull of Heaven, now portrayed as an independent being rather than a title or aspect of Anu himself, to punish Gilgamesh for rejecting Ishtar's proposal of marriage. There are good reasons for believing Uruk to have been the original seat of the ancient Anu cult. If this is correct, then Inanna (Ishtar) may at one time have been considered his consort as well as his daughter, incest not being taboo among the gods. 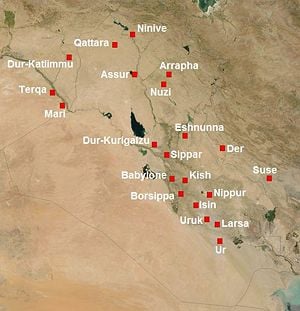 Map of ancient Mesopotamia. Anu's sacred city of Uruk lies far south, just northwest of Ur. Enlil's city of Nippur lay a few miles more to the north, and Ea's city of Eridu (not shown) was immediately west of Ur.

The doctrine of Anu's kingship and his place in the triad of primary male deities, once established, remained an inherent part of the Babylonian-Assyrian religion. It also led to the universalization of the three gods constituting the triad, disassociating them from their original local limitations. Earlier, Anu had been viewed as the local deity of Uruk, Enlil as the god of Nippur, and Ea as the god of Eridu.

The summing-up of divine powers manifested in the universe in a threefold division is thought to represent the outcome of theological evolution in the schools attached to the temples of Babylonia. At the same time, the selection of Anu, Enlil, and Ea as the three representatives of the three great spheres (heaven, sky/earth, and water) is due to the importance of the centers in which Anu, Enlil, and Ea were worshiped. Each of the three must have been regarded in his city as the most important member in a larger or smaller group, so that their union in a triad marks also the combination of the three distinctive pantheons into a harmonious whole.

In the astral theology of Mesopotamia, Anu, Enlil, and Ea became the three zones of the sun's path through the sky—the northern, middle and southern zone respectively. Anu's character was a distant one, however. In the surviving incantations and hymns, he is rarely introduced as an active force to whom a personal appeal can be made. His name becomes little more than a synonym for the heavens in general and even his title as king or father of the gods has little of the personal element in it.

A similar process may be seen in Canaanite religion, where El, the father of the gods and chief of the divine assembly, became less and less an immediate presence in later centuries. He was replaced as an immediate presence by Baal, who rebelled against the old order, overcame the god of death, Mot, and became the Marduk-like ruler of heaven and earth. Biblical scholars of the historico-critical school see a parallel process in the evolution of Hebrew religion. Originally, the Hebrews worshiped El as their god but recognized that other gods existed. Eventually, El and Yawheh became identified with each other and the worship of other gods was forbidden. Finally, Yahweh/El became the only god who truly exists, other gods being either demons or the creation of human fantasy.

It should be mentioned that Innana/Ishtar, the mother-warrior-fertility goddess known as Astarte in Canaan, remained a powerful female presence in the pantheon throughout the centuries. In the popular imagination, she may have been Anu's most important consort, although she was also notorious for having many lovers.

After Hammurabi, Anu retained his identity as the god of heaven, but was replaced as the chief god by Marduk, his grandson. The Babylonian myth known as Enuma Elish describes how Marduk came to achieve his position as chief god by rebelling against Tiamat, portrayed as a monstrous female sea deity.

Tiamat gives the Tablets of Destiny to her minion, Kingu, bestowing on him dominion over the gods this giving him "the power of Anu." Ansar, Anu's father, dispatches Anu to face Tiamat but he cannot withstand her. Finally, the gods decide that the only one equal to the task is Marduk. They declare him to be the greatest of them all and elect him as their leader and king. Ultimately, Marduk smashes Tiamat’s skull with his club, and half of her titanic body becomes the sky. Then, "he stretched the immensity of the firmament... and Anu and Enlil and Ea had each their right stations." Later, Marduk creates the physical world and humankind. Thus, Anu was retired to his honored place in the distant heavens, and Marduk became the ruling king of the gods.

In Hurrian mythology, Anu was the progenitor of all gods. His son Kumarbi bit off his genitals and spat out three deities, one of whom, Teshub, later deposed Kumarbi.