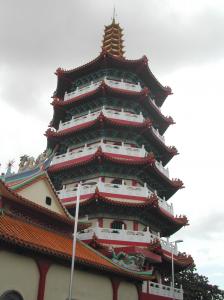 A pagoda at Sibu, Sarawak, Malaysia

A pagoda is the general term for a tiered tower with multiple eaves, common in China, Japan, Korea, Nepal, Vietnam, and other parts of Asia. Pagodas are associated with temple compounds of the Buddhist religion, which was founded in India around the sixth century B.C.E. and introduced to China in the first century C.E. Most pagodas were built to have a religious function. The term may refer to other religious structures in some countries. In Thailand, "pagoda" usually means the same as stupa, while in Vietnam, "pagoda" is a more generic term referring to a place of worship. The modern pagoda is an evolution of the Ancient Indian stupa, a tomb-like structure in which sacred relics could be kept safe and venerated.[1] The architectural structure of the stupa has spread across Asia, taking on many diverse forms as details specific to different regions were incorporated into the overall design. In China, these structures incorporated elements of Chinese pavilions and towers.

Pagodas are commonly made of wood, brick, or stone, and have as many as fifteen stories, each with an upcurved, overhanging roof. Pagodas are constructed around a central staircase and can have many forms. A pagoda has three sections; a base, a body, and a top, which often takes the form of a miniature pagoda. The pagoda form is intended primarily as a monument and has very little usable interior space.

The etymological origins of the word pagoda are obscure, but it is a Western term arising during the colonial encounter with the East. The original Chinese is ta, which is an abbreviated translation (from tapo) of the Sanskrit stupa. Despite its more recent development, the term pagoda is widely used in scholarship, even though some scholars argue that it should be replaced by the more authentic words stupa and ta. Generally speaking, the three terms refer to the same thing.[2]

History of the pagoda 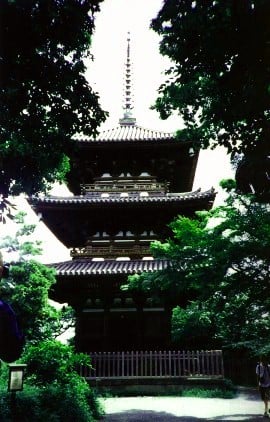 A pagoda in Japan 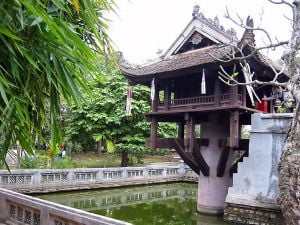 The pagoda derived from the stupa of ancient India, a dome-shaped commemorative monument, usually erected over the remains or relics of a holy man or king. The hemispherical domed stupa of ancient India took on several distinct forms in various parts of southeast and east Asia. The finial, or decorative crowning ornament of the stupa, became more elongated and cylindrical, until the stupa's upper portion took on an attenuated, tower-like appearance. This stupa form was adopted by Buddhism as an appropriate structure for enshrining sacred relics and became known to Westerners as a pagoda.

The pagoda's original purpose was to house relics and sacred writings.[3] This purpose was popularized due to the efforts of Buddhist missionaries, pilgrims, rulers, and ordinary devotees to seek out, distribute, and extol Buddhist relics.[4]

In Tibet, the Buddhist pagoda was elaborated into a bottle-shaped form; in Burma Thailand, Cambodia, and Laos it took pyramidal or conical designs; and in China, Korea, and Japan, it evolved into the best-known pagoda form: A tall tower consisting of the vertical repetition of a basic story unit in regularly diminishing proportions.

Chinese pagodas were originally built of wood in square shapes, but in the early thirteenth century, they began to be constructed of brick in hexagonal or octagonal shapes. From the Yuan through the Qing dynasties (1279–1911), pagodas were also built in circular, cross, and twelve-sided shapes out of a variety of materials including clay, glazed tiles, stone, bronze, and iron. Most wooden pagodas were destroyed by fire. Today, about 10,000 Chinese pagodas survive, mostly made of brick or stone. Many pagodas and religious structures were destroyed during the Cultural Revolution; some have been rebuilt.

The old pagodas indicate how Buddhism spread through China. Many were built on mountains outside cities or villages to prevent the recurrence of a natural disaster, and brick good-luck pavilions were sometimes built to ward off bad luck from surrounding villages. According to ancient Chinese records, the first pagoda was constructed at Nanjing in the third century C.E. The oldest surviving pagoda in China is the 131-foot high pagoda at Songyue Temple, near the Shaolin Temple on Mount Song in Henan Province. It was built in 532. The Pagoda Forest, a complex of 220 brick-and-stone pagodas built between 791 and 1830, is a traditional burial ground for Shaolin monks. The only wooden pagoda still standing in China was built in 1056, at Fogong Monastery at Yaxiang near Datong, and is one of the oldest surviving wooden buildings in the world. The octagonal Fo Guan Si pagoda in Shanxi Province, constructed of wood in the eleventh century, is 230 feet tall and houses a sculpture of Guanyin, the Buddhist Goddess of Mercy.[5]

In Burma, three large pagodas at Sri Ksetra, the earliest city-state of the Pyu people (seventh to eleventh centuries C.E.) , constructed using interior vaulting and glazed bricks, exhibit some of the distinctive Burmese design elements which were later developed in the impressive pagodas of the Pagan Kingdom (849–1287).[6]

Chinese iconography is noticeable in Chinese pagoda architecture. The image of the Shakyamuni Buddha in the abhaya mudra is also noticeable in some Pagodas. Buddhist iconography can be observed throughout the pagoda symbolism.

In an article on Buddhist elements in Han art, Wu Hung suggests that in these tombs, Buddhist iconography was so well incorporated into native Chinese traditions that a unique system of symbolism had been developed.

Pagodas are commonly made of wood, brick, or stone, and have as many as fifteen stories, each with an upcurved, overhanging roof. Pagodas are constructed around a central staircase and can have many forms. A pagoda has three sections; a base, a body, and a top, which is often in the form of a miniature pagoda. Chinese pagodas derive from low, round brick structures at Indian temples known as stupas, used to enshrine sutras (Buddhist texts) and relics of the Buddha. In China, these structures took on elements of Chinese pavilions and towers.[7]

The stories of a pagoda can be circular, square, or polygonal. Each story in an East Asian pagoda has its own prominent projecting roof line, and the whole structure is capped by a mast and disks. The pagoda form is intended primarily as a monument and has very little usable interior space.

Pagodas attract lightning strikes because of their height. This tendency may have played a role in their perception as spiritually charged places. Many pagodas have a decorated finial at the top of the structure. The finial is designed in such a way as to have symbolic meaning within Buddhism; for example, it may include designs representing a lotus. The finial also functions as a lightning rod, and thus helps to both attract lightning and protect the pagoda from lightning damage. Early pagodas were constructed out of wood, but steadily progressed to sturdier materials, which helped protect against fires and rot.

Pagodas traditionally have an odd number of floors, a famous exception being the eighteenth century pagoda "folly" designed by Sir William Chambers at Kew Gardens in London. 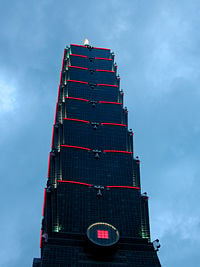 Retrieved from https://www.newworldencyclopedia.org/p/index.php?title=Pagoda&oldid=1088059
Categories:
Hidden category:
This page was last edited on 18 November 2022, at 06:15.
Content is available under Creative Commons Attribution/Share-Alike License; additional terms may apply. See Terms of Use for details.