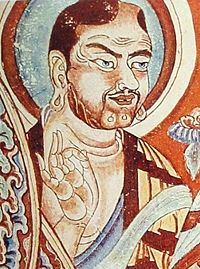 A Buddhist making the "Vitarka Mudra." Image from the Tarim Basin, ninth century.

Mudrās (Sanskrit, मुद्रा, literally "seal") are religious gestures, normally made with the hands or fingers, used in meditation, iconography, dance, and ritual, which are said to have deeper symbolic meaning and power. Mudras are an important part of Hinduism and Buddhism and they are frequently utilized in Indian meditation, yoga, and devotional practice. There are numerous types of mudras and they are said to have specific qualities that can be imparted to practitioners.

In Indian religious practice, the role of mudras as a concentration device has some similarity to the practice of prayer in other religions. In both cases, adherents use outer physical actions to help concentrate their inner being on their own spiritual practice.

In India, the use of mudras dates back to antiquity. "Ritual Mudras" can be traced back to Vedic times when they were used to regulate stress, rhythm, and intonation in the chanting of the Vedas." (Streng 1989) With the advent of Classical Hinduism, mudras continued to play a role in the ritual offerings to deities (see Puja), and in the visual portrayal of different gods and goddesses, as well as classical Indian dance techniques. Meanwhile, the emergence of Buddhism in the sixth century B.C.E. led to the continued and expanded used of mudras in Buddhist ritual, iconography and meditative practice. As Buddhism developed into different schools of thought, the Vajrayana and Shingon sects, in particular, made extensive use of mudras in their ritual practices. 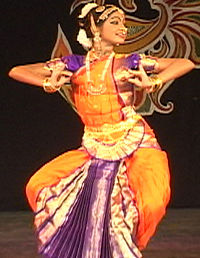 Bharatnatyam is a Classical Indian Dance form that utilizes mudras.

Traditionally, mudras have been used in a variety of ritual contexts depending on the desired effect of the mudra. Mudras play particularly important roles in the following ritual contexts in India: 1) Classical Dance, 2) religious iconography, 3) Tantric practice, 4) popular devotional ritual, and 5) advanced meditation and visualization techniques.

1 The canons of Classical Indian Dance require the use of mudras to facilitate the exposition of mythological and religious tales found in the dances themselves. In this context of dance, mudras become vehicles for the expression of religious teachings, which are conveyed to the audience through the dancers' body language. The classical dance form of Bharatnatyam became particularly well-versed for this technique (see picture inset).

2 In India and Asia, Hindu, Buddhist, and Jain iconography makes extensive use of mudras to convey deeper truths. One frequently sees statues of the Buddha or Hindu deities in poses making specific gestures with their hands. These mudras are a type of nonverbal symbolic language that is conveyed by the icon to the practitioner.

3 Many schools of Tantra, especially the Buddhist schools of Tibet, utilize mudras as part of their religious practices. In the tantric context, mudras have two meanings: in the Hindu tantra, "mudra" refers to one of the five practices partaken by tantric participants, which is often translated cryptically as "parched grain." In the Vajrayana schools of Buddhism, mudras symbolize the unity of wisdom and compassion, male and female, and are seen as integral to Buddhist tantric practices.

4 At the level of popular Hindu devotion and ritual, the average Hindu is expected to perform daily ritual oblations in the performance of devotional rites. These rituals involve mudras in the form of cleansing, prostrations, Darshan, and Namaskars required to the deity.

The ten most popular mudras are as follows: 1) Abhaya Mudrā, 2) Anjali Mudra, 3) Bumisparsha Mudra, 4) Dharmachakra Mudrā, 5) Dhyāni Mudrā, 6) Para-Jnana Mudra, 7) Uttarabodhi Mudra, 8) Vajrapradama Mudra, 9) Varada Mudrā, and 10) Vitarka Mudrā.[1] Not all mudras are done with the hands. An example of a mudra done without the hands would be Kechari mudra, done with the tongue.

Some of these mudras are described in more detail below:

On of the most well-known mudras in Buddhism is the outward-facing open palm known as Abhaya (without fear) mudra. This gesture is often associated with depictions of the Buddha who is frequently shown in frescoes as subduing an elephant when it attacked him. The mudra represents protection, peace, benevolence, and is supposed to dispel all fear of the devotee. In the Theravāda tradition of Buddhism the mudra is usually made with the right hand raised to the shoulder's height, the arm bent and the palm facing outward with the fingers upright and joined and the left hand hanging down on the right side of the body while standing. In Thailand and Laos this mudra is associated with the walking Buddha who is often shown having both hands making a double Abhaya mudrā that is uniform.

The mudra was probably used before the onset of Buddhism as a symbol of good intentions proposing friendship when approaching strangers. In Gandhāra Art it is seen used during showing the action of preaching and also seen in China during the Wei and Sui eras of the fourth and seventh centuries. In Mahāyāna Buddhism, the northern schools' deities often used the mudra paired with the other hand. In Japan, when the Abhaya Mudrā is used with the middle finger slightly projected forward it is a symbol of the Shingon Sect.

The Bhūmisparśa "Earth-touching" Mudrā literally represents the Buddha as taking the earth as witness. It represents the moment when Buddha took the earth as testimony when he had resolved the problem of cessation of suffering while he was under the papal tree at Bodh-Gaya. Usually represented by the historical Buddha and Akṣobhya sitting in the lotus position. The right hand touches the ground with the fingertips near the right knee extended or with only the index pointing down touching the ground with the left hand commonly resting on the lap with the palm facing up.

It can also represent the subjugation of the demon horde of Māra. Akṣobhya is often seen using this mudra while clutching part of his rode with his left hand. In Korea, confusion of the high period led to rare imagery where Amitābha was using the Bhūmisparśa Mudrā. (Japanese- Goma-in, Anzan-in, Anchi-in, Sokuchi-in; Chinese- Chudi Yin)

The Dharmachakra Mudrā represents a central moment in the life of Buddha when he preached his first sermon after his Enlightenment, in Deer Park in Sarnath. Gautama Buddha is generally only shown making this mudra, save Maitreya, as the dispenser of the Law. This mudra position represents the turning of the wheel of the Dharma. Dharmacakra Mudrā is formed when two hands close together in front of the chest in Vitarka having the right palm forward and the left palm upward, sometimes facing the chest. There are several variants such as in the frescoes of Ajanta, India the two hands are separated, and the fingers do not touch. In the Indo-Greek style of Gandhāra the clenched fist of the right hand seemingly overlie the fingers joined to the thumb on the left hand. In pictorials of Horyu-ji in Japan the right hand is superimposed on the left. Certain figures of Amitābha, Japan are seen using this mudra before the ninth century. (Japanese: Tenborin-in, Chikichi-jo, Hoshin-seppo-in; Chinese: Juanfalun Yin)

Hands of Amitābha statue at Kotokuin

The Dhyāni Mudrā is the gesture of meditation, of the concentration of the Good Law and the Sangha. The two hands are placed on the lap, right hand on left with fingers fully stretched and the palms facing upwards, forming a triangle, symbolic of the spiritual fire or the Triratna, the three jewels.

This Mudra is used in representations of the Buddha and Amitābha. Sometimes the Dhyāna Mudrā is used in certain representations of Bhaiṣajyaguru as the Medicine Buddha, with a medicine bowl placed on the hands. It originated in India most likely in the Gandhāra and in China during the Wei period. This mudra was used long before the Buddha as yogins have used it during their concentration, healing, and mediation exercises.

The Jnana Mudrā is the mudra of teaching. It resembles the vitarka mudra, and is done by joining the tips of the thumb and the index together, and keeping the other fingers straight. The fingers are somewhat kept straighter and rather horizontal, and the hand is held at the level of the chest.

The Karana Mudrā is the mudra that expels demons, and removes obstacles such as sickness or negative thoughts. It is made by raising the index and the little finger, and folding the other fingers. It is rather similar to the gesture known as "corna" in the West.

The Varada Mudrā signifies offering, welcome, charity, giving, compassion and sincerity. It is nearly always used with the left hand for those whom devote oneself to human salvation. It can be made with the arm crooked the palm offered slightly turned up or in the case of the arm facing down the palm presented with the fingers upright or slightly bent. The Varada Mudrā is rarely seen without using another mudra used by the right hand, typically with the Abhaya Mudrā. It is often confused with the Vitarka Mudrā, which it closely resembles. In China and Japan during the Wei and Asuka periods respectively the fingers are stiff and then gradually begin to loosen as it developed through time, eventually leading to the Tang Dynasty were the fingers are naturally curved. In India the mudra is used in images of Avalokitesvara from the Gupta Period of the fourth and fifth centuries. The Varada mudrā is extensively used in the statues of Southeast Asia. (Japanese- Yogan-in, Segan-in, Seyo-in; Chinese- Shiynan Yin)

The Vitarka Mudrā is the gesture of discussion and transmission of Buddhist teachings. It is done by joining the tips of the thumb and the index together, and keeping the other fingers straight very much like Abhaya and Varada Mudrās but with the thumbs touching the index fingers. This mudra has a great number of variants in Mahāyāna Buddhism in East Asia. In Tibet it is the mystic gesture of Taras and Bodhisattvas with some differences by the deities in Yab-yum. (Sanskrit: Prajñāliṅganabhinaya, Vyākhyāna mudrā; Japanese: Seppo-in, An-i-in; Chinese- Anwei Yin)