Suzhou (Simplified Chinese: 苏州; Traditional Chinese: 蘇州; pinyin: Sūzhōu; ancient name: 吳) is a city on the lower reaches of the Yangtze River and on the shores of Lake Taihu in the province of Jiangsu, China. Called the cradle of Wu culture, Suzhou is the oldest town in the Yangtze Basin, founded in 514 B.C.E. With the completion of the Grand Canal during the Sui Dynasty (581–618 C.E.), Suzhou found itself strategically located on a major trade route. That marked the emergence of Suzhou as a center for trade and commerce. Suzhou has been an important center for China's silk industry since the Song Dynasty (960-1279), and continues to hold that prominent position today.

Suzhou reached its golden age with the Ming Dynasty in 1368 C.E. During the Ming Dynasty, and the Qing dynasty which followed, aristocrats constructed many of the famous private gardens. From that period, the city has won renown for its beautiful stone bridges, pagodas, and meticulously designed gardens. By the end of World War II, many of the gardens lay in ruins. The Chinese government launched a project in the 1950s, to restore the gardens to their former glory. In 1981, the provincial government listed Suzhou as a historical and cultural heritage site, assisting Suzhou in becoming one of the most prosperous cities in China. The GDP per capita reached ¥79,406 (c. US$10,087) in 2006, ranked number fifth among 659 Chinese cities. UNESCO designated the Classical Gardens of Suzhou a World Heritage Site in 1997 and 2000.

Suzhou, the cradle of Wu culture, has been recognized as one of the oldest towns in the Yangtze Basin. 2500 years ago in the Late Shang Dynasty, local tribes calling themselves "Gou Wu" lived in the area became the modern city of Suzhou.[1] 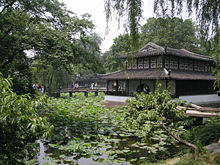 In 473 B.C.E., Yue defeated the kingdom of Wu. The golden era of Suzhou ended with that conquest. Remnants of the civilization include the ruins of the 2,500 year old city wall and the gate through it at Pan Gate. The Chu, a kingdom to the east, in turn annexed Yue in 306 B.C.E. By the time of the Qin Dynasty, the city went by the name Wu County. Xiang Yu (项羽) staged his historical uprising here in 209 B.C.E., which contributed to the overthrow of Qin. During the Sui Dynasty, in 589 C.E., the city name changed to Suzhou.

With the completion of the Grand Canal, Suzhou found itself strategically located on a major trade route.[2] In the course of the history of China, it has been a metropolis of industry and commerce on the south-eastern coast of China. During the Tang Dynasty (825 C.E.), the great poet Bai Juyi (白居易) constructed the Shantang Canal (called "Shantang Street" or 山塘街) to connect the city with Huqiu. In 1035 C.E., famed poet and writer Fan Zhongyan (范仲淹) founded the Temple of Confucius, which became the venue for imperial civil examinations.

In February 1130, the advancing Jin army from the north ransacked the city and massacred the inhabitants. The Mongol invasion followed in 1275, destroying of the royal city (in the center of the walled city). With the advent of the Ming Dynasty in 1368 C.E., the city began a golden age. The gentry of the Ming and Qing dynasties constructed many of the famous private gardens. The city experienced devastation during the Taiping rebellion, when Taiping soldiers seized the city. In November 1863, the Ever Victorious Army of Charles Gordon recaptured the city from the Taiping forces.[3]

The Japanese invasion in 1937 presented the next crisis to strike the city. By the end of the war, many of the gardens lay in ruin. In the early 1950s, the government restored Zhuo-Zheng Yuan (Humble Administrator's Garden) and Dong Yuan (East Garden) to their former glory. In 1981, the State Council listed the ancient city as one of four cities (the other three being Beijing, Hangzhou and Guilin) as designated historical and cultural heritage sites. With that government designation and protection, Suzhou has developed into one of the most prosperous cities in China. 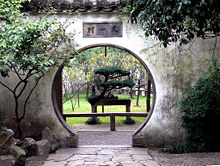 An entrance to the Youyicun garden

The Suzhou region has won fame for a number of cultural highlights, among them Chinese opera. Kunqu originated in the Suzhou region, as did the Suzhou Opera more recently. Ballad-singing, or Suzhou pingtan, constitutes a local form of storytelling that mixes singing (accompanied on the pipa) with portions in spoken dialect.

Suzhou singers create "Jasmine," a song sung by Chinese singers or actresses thousands of times on the occasions of almost every important meetings or celebrations. Jasmine is the symbol of Suzhou, as is Tai Hu Lake.

"A very great and noble city… It has 1600 stone bridges under which a galley may pass."—Marco Polo

"Capital of Silk," "Land of Abundance," "Gusu city," "Cradle of the Wu Culture," and "World of Gardens," "Oriental Venice or Venice of the East"—nicknames of Suzhou

"Born in Suzhou, live in Hangzhou, eat in Guangzhou, and die in Liuzhou."—Chinese saying.

美不美 太湖水 親不親 故郷人 "Beautiful or not beautiful, nothing is more beautiful than the waters of Taihu. Related or not related, we are all the people of the same village."—Chinese saying

Suzhou's economic growth into one of the most prosperous cities in China has, in turn, fostered the growth of its satellite cities, most notably Kunshan, Taicang, and Zhangjiagang, which form the greater Suzhou region. Suzhou and its satellite cities host a growing number of high-tech development enterprises.

Suzhou has jurisdiction over (at county level):

Suzhou (including 7 districts and 5 county-level cities under Suzhou's jurisdiction) has more than 50 sister cities, twin towns and provinces: 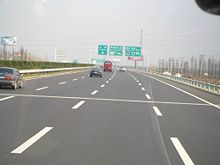 The 8 lane cross section of the HuNing Expressway. 显示双向8车道

Suzhou is located on the Jinghu Railway linking Shanghai and Nanjing, the provincial capital, with hourly railway service. Suzhou Railway Station has one of the highest passenger traffic in China with 139 trains daily. T-Trains only take 45 minutes to Shanghai and an hour and half to Nanjing. Driving options include the Jiangsu-Shanghai Expressway, the Yangtze Riverine Expressway, the Suzhou-Jiaxing-Hangzhou Expressway. In 2005, the new Suzhou Outer Ring linked the peripheral county-level cities of Taicang, Kunshan, and Changshu. By water, Suzhou is connected with Zhangjiagang, Luzhi, Liujia and Changshou. The Suzhou Metro serves the city while undergoing expansion.

Retrieved from https://www.newworldencyclopedia.org/p/index.php?title=Suzhou&oldid=1083497
Categories:
Hidden category:
This page was last edited on 23 October 2022, at 17:49.
Content is available under Creative Commons Attribution/Share-Alike License; additional terms may apply. See Terms of Use for details.