Jiuzhaigou Valley (Simplified Chinese: 九寨沟; Traditional Chinese: 九寨溝; pinyin: Jiǔzhàigōu; lit. "Valley of Nine Villages;" Tibetan: Sicadêgu) designates a nature reserve in the northern Sichuan province of China. Known for its many multi-level waterfalls and colorful lakes, UNESCO declared it a World Heritage Site in 1992. It belongs to the category V (Protected Landscape) in the IUCN system of protected area categorization. Sitting on major fault lines of the Qinghai-Tibet Plate and the Yangtze Plate, earthquakes that shape the landscape, creating the magnificent beauty of the region also can inflict great loss of life and property. In the May 2008 earthquake, the Jiuzhaigou Valley Scenic area sat over 200 kilometers from the epicenter, escaping damage.[1] The Giant Panda population in Jiuzhaigou Valley, which numbers around twenty, escaped unharmed.

UNESCO designated Jiuzhaigou Valley a World Heritage site in 1992, by virtue of its unique and exceptionally beautiful systems of lakes and waterfalls, as well as fauna. In 1997, UNESCO designated the region a World Biosphere Reserve, highlighting the complex and delicate biosphere. One thousand Tibetan and Qiang Chinese live in the valleys. They have lived within the region for generations, considering the valley the place where God lives. Traditionally, they made their living within the area by farming and herding yak. The Tibetans and Qiang who live in the villages have been required to cease husbandry since the valley became a World Heritage Site and designated World Biosphere Reserve, even though their activities posed no threat to the environment.

That can not be said for the thousands of visitors who visit the valley daily. The steady increase of tourists each year has threatened the environment, putting the survival of the Giant Panda and the Golden Snub-nosed Monkey, both endangered species, in question. Tourism has increased from 5,000 patrons a year in 1984, when the park first opened, to 1,190,000 tourists in 2002. In 2004, the average daily number of visitors reached 7,000 or 2,555,000 visitors. Only 3000 of those visitors came from other countries. As the number of tourists who make the arduous journey to view the natural splendors of park increases, the delicate nature of the site will come under greater threat.

Jiuzhaigou lies at the southern end of the Minshan mountain range, 330 km north of the provincial capital of Chengdu. Part of the Jiuzhaigou County (formerly Nanping County) in the Aba Tibetan Qiang Autonomous Prefecture of northwestern Sichuan province, it sits near the Gansu border.

With a cool climate, the temperate has a mean annual temperature of 7.2°C, with means of -1°C in January and 17°C in July. Total annual rainfall is 661 mm, 80 percent of which occurs between May and October.

Tibetan and Qiang peoples inhabited the remote region for centuries, although not officially discovered by the government until 1972. Extensive logging took place until 1979, when the Chinese government banned such activity and made the area a national park in 1982. The government established an Administration Bureau and the site officially opened to tourism in 1984. Architects completed the layout of facilities and regulations in 1987. UNESCO designated the site a World Heritage Site in 1992, and a World Biosphere Reserve in 1997.

Jiuzhaigou takes its name from the nine Tibetan villages along its length. Few of them remain today, depending on what classifies as "a village inside the valley." The following villages still exist: Heye, Shuzheng and Zechawa along the main paths, plus Rexi and Heijiao in the smaller Zaru Gully. Maps also indicate villages named Jianpan, Panya and Guwa near the end of a small gully opposite Zaru. Finally, the Penbu, Panxing and Yongzhu villages lie along the road that passes through the town of Jiuzhaigou/Zhangza outside the valley.

In 1997, the permanent population of the valley hovered about 1000, made up of about 130 Tibetan and Qiang families. Due to the protected nature of the park, agriculture activities have been prohibited, the residents relying on government subsidies as well as tourism.

Jiuzhaigou's ecosystem classifies as temperate broad-leaf forest and woodlands, with mixed mountain and highland systems. Virgin mixed forests cover nearly 300 km² of the core scenic area. Those forests take on attractive yellow, orange, and red hues in the autumn, making that season a popular one for visitors. They serve as home to a number of plant species of interest, such as endemic varieties of rhododendron and bamboo.

Local fauna includes the endangered Giant Panda and Golden Snub-nosed Monkey. Both have very small populations(less than 20 individuals for the pandas) and live isolated. Their survival remains in question in a valley subject to increasing tourism. Jiuzhaigou supports approximately 140 bird species. 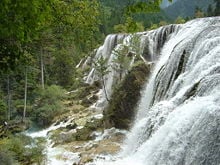 High-altitude karsts shaped by glacial, hydrological and tectonic activity make up Jiuzhaigou's landscape. It lies on major faultlines on the diverging belt between the Qinghai-Tibet Plate and the Yangtze Plate, and earthquakes have also shaped the landscape. Carbonate rocks such dolomite and tufa, as well as some sandstone and shales, mostly make up the rock strata.

The valley includes the catchment area of three gullies (which, due to their large size, many call valleys themselves), and serves as one of the sources of the Jialing River, part of the Yangtze River system.

Dozens of blue, green and turquoise-colored lakes constitute Jiuzhaigou's best-known feature. The local Tibetan people call them "Haizi" in Chinese, meaning "son of the sea." Originating in glacial activity, rockfalls and other natural phenomena dammed them, then solidified through carbonate deposition. Some lakes have a high concentration of calcium carbonate, making their water so clear people can see the bottom even at high depths. The lakes vary in color and aspect according to their depths, residues, and surroundings.

Some of the less stable dams and formations have been artificially reinforced, and the government forbids tourists direct contact with the lakes or streams.

Three valleys arranged in a Y shape shape Jiuzhaigou. The Rize and Zechawa gullies flow from the south and meet at the center of the site where the form the Shuzheng gully, flowing north to the mouth of the valley. 55 km of roads for shuttle buses, as well as boardwalks and small pavilions, line the mountainous watersheds of those gullies. The boardwalks, typically located on the opposite side of the lakes from the road, shield them from disturbance by passing buses.

Most visitors will first take the shuttle bus to the end of Rize and/or Shuzheng gully, then make their way back downhill by foot on the boardwalks, taking the bus instead when the next site is too distant. A summary of the sites found in each of the gullies follows. 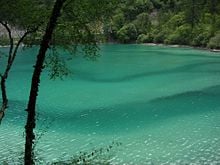 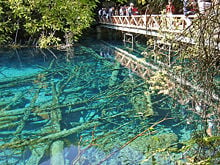 The Zechawa Gully (则查洼沟, Zécháwā Gōu), the south-eastern branch of Jiuzhaigou, extends approximately the same length as Rize gully (18 km ) but climbs to a higher altitude (3150 m at the Long Lake). Going downhill from its highest point, it features the following sites:

The Shuzheng Gully (树正沟, Shùzhèng Gōu), the northern (main) branch of Jiuzhaigou, ends after 14.5 km at the Y-shaped intersection of the three gullies. Going downhill from the intersection to the mouth of the valley, visitors encounter the following:

Jiuzhaigou, compared to other high-traffic scenic spots in China, presents a notoriously difficult access by land. Most tourists reach the valley by a ten hour bus ride from Chengdu along the Minjiang River canyon, prone to frequent rock slides and mudslides that can add several hours to the trip. As of 2004, the construction of a new highway which, when completed, should greatly facilitate the journey, has incurred further delays. Since 2003, it has been possible fly from Chengdu or Chongqing to an airport on a 11311 ft. high mountain side near Songpan County, and then take an hour-long bus ride to Jiuzhaigou, or a two-hour bus ride to Huanglong. From 2006, a daily flight to Xi'an had been opened in peak season. A new heliport has been built near the valley.

Retrieved from https://www.newworldencyclopedia.org/p/index.php?title=Jiuzhaigou_Valley&oldid=1074893
Categories:
Hidden category:
This page was last edited on 1 August 2022, at 13:25.
Content is available under Creative Commons Attribution/Share-Alike License; additional terms may apply. See Terms of Use for details.