Approximately 1,600 Panda, a revered national symbol of China, live in the wild, most in Sichuan province. Approximately 30 percent of theGiant Panda population lives in Sichuan.[1] In addition to the natural habitat well-suited to support the Pandas, the Chinese government has established the China Conservation and Research Center for the Giant Panda at Wolong for breading Panda in captivity. A massive earthquake, with an epicenter only fifteen miles from the sanctuary, damaged the natural habitat Panda's need to survive. One estimate has stated that as much as 80 percent of the natural habitat vital for the Panda's survival has been damaged.[1] If that proves true, the fate of the Panda may lay in the balance. The Panda especially requires the bamboo grown in the region to survive.[2]

The People's Republic of China has decreed Wolong National Nature Reserve (Simplified Chinese: 卧龙自然保护区; Traditional Chinese: 臥龍自然保護區) located in Wenchuan County, Sichuan Province, a protected area. Established in 1963, the reserve covers an area of about 200,000 hectares, protecting over 4,000 recorded species in the reserve. Wolong National Nature Reserve houses more than 150 highly endangered giant pandas. In June 1980, the Chinese government established the China Conservation and Research Center for the Giant Panda at Wolong with the support of the World Wildlife Fund (WWF). As of 2007, researchers have conducted many breeding research on giant pandas and have successfully bred sixty six panda cubs. 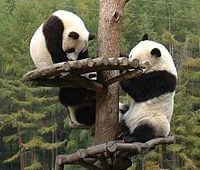 A mountain stream runs through the Wolong Valley, in which the Reserve lies. Boulders and small, rounded stones, abound in the stream that has a high alkaline content with pH levels measured at 8.91. Plentiful sand and uncontrolled gravel mining have resulted in the poor water quality and extreme turbidity of the stream.[3] Dr. Jianguo Liu of Michigan State University, conducting research in 2001 research, concluded that the rate of degradation of the stream has increased since the creation of the Reserve. Liu's research team, using NASA's satellite images and records of population, concluded that due to tourism and the increase in local population has fostered an an unprecedented threat to the environment. "Tourists don't think they have an impact on panda habitat, but indirectly each visitor has some impact," Liu said. "We don't see ourselves as a destructive force, but we are."[3]

The region, including the Panda Research Center, was largely devastated on May 12, 2008, by a catastrophic earthquake, though the captive giant pandas have been reported safe.[4][5] Initially, officials lost contact with the reserve.[6] The People's Republic of China’s Foreign Ministry reported that a group of 31 British tourists visiting the Wolong panda reserve in the quake-hit area had returned safely and uninjured to the provincial capital. The well-being of an even greater number of pandas in the neighboring panda reserves remained unknown initially.

Five security guards at the reserve died during the earthquake.[7] Six pandas escaped from their damaged enclosures. By May 20, two pandas at the reserve had been found injured, while a search continued for another two adult pandas that went missing after the quake.[8] As of May 28, 2008, one panda remained missing.[9] Rescue teams later found the missing panda dead under the rubble of an enclosure.[10] Sadly, nine-year-old Mao Mao, a mother of five at the breeding center, had been discovered on Monday, June 9, 2008, her body crushed by a wall in her enclosure. Panda keepers and other workers placed her remains in a small wooden crate and buried her outside the breeding center. 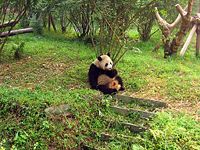 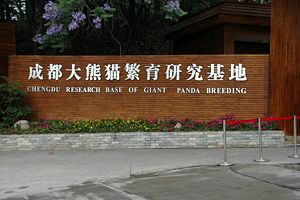 Chengdu Research Base of Giant Panda Breeding, or simply Chengdu Panda Base, located in Chengdu, Sichuan, People's Republic of China, serves as a non-profit research and breeding facility for Giant Pandas and other rare animals. Founded in 1987, the Chengdu Panda Base started with six giant pandas rescued from the wild. By 2007, the Center mid-wifed 110 panda births, and the captive panda population has grown to 62.[11] With the stated goal to "be a world-class research facility, conservation education center, and international educational tourism destination, the Chengdu Panda Base has earned international acclaim. 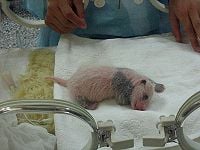 Giant Panda about one week old at Chengdu's Giant Panda Breeding Research Base.

Chengdu Panda Base has partnered with numerous organizations to improving techniques for raising giant pandas in captivity. For example, its partnership with Zoo Atlanta helped the zoo secure the loan of two giant pandas.[12] To date, those two giant pandas, Yang Yang and Lun Lun, have given birth to one off-spring at the zoo.

Other research partners include:[13]

Retrieved from https://www.newworldencyclopedia.org/p/index.php?title=Sichuan_Giant_Panda_Sanctuaries&oldid=1098223
Categories:
Hidden category:
This page was last edited on 27 January 2023, at 14:32.
Content is available under Creative Commons Attribution/Share-Alike License; additional terms may apply. See Terms of Use for details.