The first Buddhist monasteries were built on Mount Emei during the first century C.E. Their architecture is famous for blending into the natural scenery. Seventy Buddhist monasteries built during the Ming and Qing dynasties are located in the vicinity of the mountaintop. The Leshan Giant Buddha, carved into the rock cliff facing Mount Emei, stands 71 meters (230 ft) tall. Chinese monk Hai Tong and his disciples carved the Buddha statue beginning in 713 C.E. After Tong's death, his disciples completed carving the statue in approximately 803 C.E., ninety years after the work began. UNESCO designated Mt. Emei and Leshan Giant Buddha a World Heritage Site in 1996. 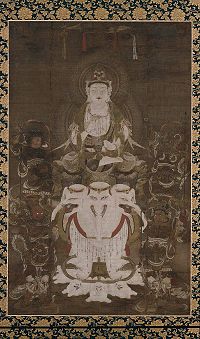 Samantabhadra, known in Chinese as Puxian (普贤菩萨) is the patron Bodhisattva of Mount Emei. Known as the "Lord of the Truth" who represents the practice and meditation of all Buddhas, Samantabhadra forms the Shakyamuni trinity in Mahayana Buddhism together with Shakyamuni and fellow disciple Manjusri.

The patron of the Lotus Sutra, Samantabhadra made the ten great vows of the Bodhisattva according to the Avatamsaka Sutra. He is most commonly described as a Bodhisattva himself, although some Vajrayana Buddhist traditions, namely the Nyingmapa, regard him as a primordial Buddha in indivisible yab-yum union with his consort Samantabhadri. Literally "he whose bounty is omnipresent," Samantabhadra represents the Buddhist ideals of Law and Compassion. Alongside Manjusri, he is one of the three acolytes of Shakyamuni.

Sixteenth and seventeenth century sources allude to the practice of martial arts in the monasteries of Mount Emei,[1] making the earliest extant reference to the Shaolin Monastery as the place Chinese boxing originated.[2]

Mount Emei was the location of the first Buddhist temple built in China in the first century C.E.[3] The site has approximately seventy Buddhist monasteries of the Ming and Qing periods, most of them located near the mountain top. The monasteries demonstrate a flexible architectural style that harmonizes with the landscape. Some, such as the halls of Baoguosi, stand on terraces of varying levels, while others, including the structures of Leiyinsi, sit on raised stilts.[4] The fixed plans of Buddhist monasteries of earlier periods had been modified or ignored to made full use of the natural scenery. The buildings of Qingyinge spread out on an irregular plot between the Black Dragon River and the White Dragon River. The large site has a the winding, fifty kilometer, foot path that takes several days to walk.[5] Cable cars run to top level of the mountain. 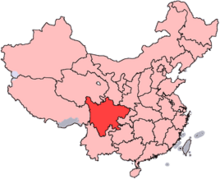 The Leshan Giant Buddha (Simplified Chinese: 乐山大佛; Traditional Chinese: 樂山大佛; pinyin: Lèshān Dàfó) was built during the Tang Dynasty (618-907). Carved out of a cliff face that lies at the confluence of the Minjiang, Dadu and Qingyi rivers in the southern part of Sichuan province in China, it stands near the city of Leshan. The stone sculpture faces Mount Emei, with the rivers flowing below his feet. The Mount Emei Scenic Area, including Leshan Giant Buddha Scenic Area, has been listed as a UNESCO World Heritage Site since 1996. It escaped the 2008 Sichuan earthquake undamaged.[6]

Chinese monk, Hai Tong, began the sculpture in 713 C.E.[7] He hoped that the Buddha would calm the turbulent waters that plagued the shipping vessels traveling down the river. When funding for the project nearly depleted, legend states that he gouged out his own eyes to show his piety and sincerity. His disciples completed the sculpture ninety years later. Apparently the massive carving resulted in so much stone being removed from the cliff face and deposited into the river below that the currents were indeed altered by the statue, making the waters safe for passing ships. 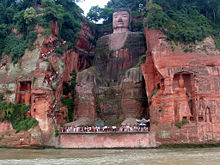 The Leshan Buddha has fallen victim to the pollution resulting from the unbridled development in the region. According to Xinhua news agency: "The Leshan Buddha and many Chinese natural and cultural heritage sites have succumbed to weathering, air pollution, inadequate protection and negative influences brought by swarms of tourists."[8] The local government has shut factories and power plants close to the statue. That may have been too little, too late as the statue already suffers from a "blackened nose" and smears of dirt across the face. The government has promised to commit the resources needed to restore the site.[9][10]

At 71 meters (233 feet) tall, the statue depicts a seated Maitreya Buddha with his hands resting on his knees. His shoulders measure twenty-eight meters wide and his smallest toenail is large enough to easily accommodate a seated person. A local saying goes: "The mountain is a Buddha and the Buddha is a mountain." That may be because the mountain range in which the Leshan Giant Buddha is located looks like a slumbering Buddha when seen from the river, with the Leshan Giant Buddha at the center.

Retrieved from https://www.newworldencyclopedia.org/p/index.php?title=Mount_Emei&oldid=1086772
Categories:
Hidden category:
This page was last edited on 10 November 2022, at 17:05.
Content is available under Creative Commons Attribution/Share-Alike License; additional terms may apply. See Terms of Use for details.