Capital Cities and Tombs of the Ancient Koguryo Kingdom

Capital Cities and Tombs of the Ancient Koguryo Kingdom, located in and around Ji'an, Jilin in the People's Republic of China, received UNESCO's World Heritage Site designation. The site contains the archaeological remains of three cities (Wunu Mountain City, Guonei City, and Wandu Mountain City), and forty identified tombs of Koguryo imperial and noble families. Until recently, little has been known about the origin of Korea in the northern regions of China and in North Korea. At the end of the Joseon Dynasty, in the late nineteenth century, China had become protective of the northern regions historically claimed by Korea. China and Joseon signed an agreement that the movement of Koreans into Manchuria would be a crime punishable by death. Still, Koreans migrated secretly into the historic region of Korea's origin, the area of Tangun Joseon, Kija Joseon, and Koguryo.

The fall of the Berlin Wall in 1989, and the turning away from communism by the Chinese government that followed, opened a new era for archeology. With the approach of the Olympics in the summer of 2008, China has been gradually opening to archeological investigation. UNESCO designated the Capital Cities and Tombs of the Ancient Koguryo Kingdom a World Heritage Site in 2004. China's opening the region to archeology constituted a brave act on their part. The discovery and excavation of the original capital cities of the Korean empire, dating to at least the time of Christ, reopens the question of ownership of the region, at least for scholars. Some Korean scholars argue that Korea, especially North Korea, has claim to the area while some Chinese scholars argue that the early dynasties had been Chinese provinces, not Korean kingdoms. In any case, the argument seems academic since the governments of China, North Korea, and South Korea are content to leave borders where they are. 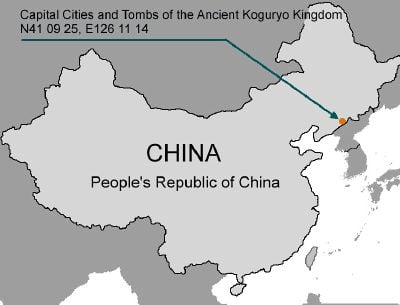 Capital Cities and Tombs of the Ancient Koguryo Kingdom added to UNESCO in 2004.

Wu Nu Shan has been considered the birthplace of the Korean Kingdom "Goguryeo" civilization and the last feudal dynasty—Manchu's Qing Dynasty. Its peculiar and beautiful landscapes have made it internationally famous in recent years.

Wu Nu Shan has a long history of human habitation. Recently archaeologists have found historical artifacts on the mountain, including pottery from the late Neolithic Age, more than 4500 years ago. Those artifacts also include some human-used weapons and tools which have been dated as thousands of years old. The Korean kingdom, Goguryeohad been founded in 37 year B.C.E above the mountain. Goguryeo moved the capital to Gungnae Seong in the year 3 B.C.E.. In 1424 C.E., when the third king of Jurchen Li Manzhu invaded Liao Ning, they quartered on that mountain and founded the Manchu kingdom.

Wu Nu Shan situates in the northeast of Huanren County and the northwest of the Hun Jiang River, eight km from the county. Its main peak measures 821 meters above sea level, has a length of 1500 m from the north to the south side and a width of 300 m from the east to the west side.

Wu Nu Shan sits in the north temperate zone so the four seasons, enjoying four distinct season. More than sixty scenic spots populate the area. In the spring and summer, flowers, trees, butterflies and birds abound. The lake has a regular schedule of tourist ships during the summer. In autumn, red dominates the mountain, as the famous Chinese sweet gums come into season. At the end of the year, the mountain will appear to put on a white coat and become like a jade dragon lying beside the river.

Wu Nu Shan, called "The First Defensive City Wall In The East," has all the elements of a defensive city wall—temple, palace, barn, barracks, water source, and a city wall of more than 200 meters above the relative sea level. The Goguryeo kingdom could quarter at the mountain as long as necessary during the cold weather seasons.[2]

Three-legged bird flanked by dragon and phoenix. Mural from the Koguryo period, Korea

Gungnae-seong, present-day Ji'an (集安), served as the second capital city of the ancient Kingdom of Goguryeo. The kingdom's second ruler, King Yuri, chose the site as the capital city during the tenth month of the year 3 C.E. Invaders sacked the city several times until the rise of the 19th ruler king Gwanggaeto the Great, who greatly expanded Goguryeo's territory and made it a formidable power in the northeast Asia. When King Gwanggaeto died during 413 C.E., his son, King Jangsu, inherited the throne and moved the capital south to Pyongyang in the year 427 C.E.

Gungnae-seong fell to the Silla-Tang alliance when General Yeon Namsaeng, son of Yeon Gaesomun, surrendered the city in 666 C.E. The kingdom of Goguryeo itself fell in 668 C.E. when Tang army captured Pyongyang and took King Bojang and Yeon Namgeon into custody.

The site includes archaeological remains of forty tombs: fourteen imperial tombs and twenty six nobles. The tombs host the remains of royalty in Koguryo, which ruled over parts of northern China and the northern half of the Korean Peninsula from 37 B.C.E. to 668 C.E.[1]

Some of the tombs have elaborate ceilings, wide spaces without columns, and carrying a heavy load of a stone or earth tumulus (mound) placed above them. The tombs, particularly the important stele and a long inscription on one of the tombs, shows influence of Chinese culture on Koguryo. The paintings in the tombs, while showing artistic skills and specific style, provide an example of strong influence from various cultures.[1] The tombs represent a masterpiece of the human creative genius in their wall paintings and structures.[1]