Mount Tai (泰山; Pinyin: Tài Shān) is a Chinese mountain of historical and cultural significance located north of the city of Tai'an, in Shandong Province. The tallest peak is Jade Emperor Peak (Simplified Chinese: 玉皇顶; Traditional Chinese: 玉皇頂; Pinyin: Yùhuáng Dīng), which is commonly reported as 1545 metres (5069 feet) tall,[1] but is described by the Chinese government as 1532.7 metres (5028.5 feet).[2]

Mount Tai is often considered to be the most important of the "Five Sacred Mountains of Daoism," to the extent that it is actively considered to be a deity by many religious Daoists.[3] Further, it has since ancient times been associated with rulership, leading to its incorporation into the imperial cult as a source of charisma (in the Weberian sense). In particular, it was thought that scaling to the highest peak and performing a sacrifice there was a guarantee of the political legitimacy of a ruler.

The physical characteristics of Mount Tai, both in terms of its geology and its ecology, are eloquently described on the website of the United Nations Environment Programme:

Mt Taishan rises abruptly from the vast plain of central Shandong, and is naturally endowed with many scenic sites. Geologically, it is a tilted fault-block mountain, higher to the south than north, and is the oldest and most important example of the paleo-metamorphic system representative of the Cambrian Period in eastern China. Referred to as the Taishan Complex, it comprises magmetised, metamorphic, sedimentary rock and an intrusive mass of various origins that were formed in the Archean Era 170-200 million years ago. Subsequently, in the Proterozoic Era, the Taishan region began to rise, becoming part of the continent by the end of the era. Uplift continued until the middle of the Cenozoic Era. The gneiss which emerged in the Taishan region is the foundation for all of North China. Cambrian strata, fully emerged in the north, are rich in fossils. Six streams flow from the summit, their water renowned for its extremely low mineral content, slight acidity (pH = 6.3) and relatively high oxygen content (6.4 mg/l).

Vegetation covers 79.9 percent of the area, which is densely wooded, but information about its composition is lacking. The flora is diverse and known to comprise 989 species, of which 433 species are woody and the rest herbaceous. Medicinal plants total 462 species and include multiflower knotweed, Taishan ginseng, Chinese gromwell and sealwort, which are renowned throughout the country. Some trees are very old and famous, notably the 'Han Dynasty Cypresses' (planted 2,100 years ago by Emperor Wu Di of the Han Dynasty), 'Tang Chinese Scholartree' (planted 1,300 years ago), 'Welcoming Guest Pine' (500 years old) and 'Fifth Rank Pine' (named by Emperor Qin Shi Huang of the Qin Dynasty and replanted some 250 years ago).[4]

As summarized on mount-tai.com: "Mount Tai is located just north of the city of Tai'an and to the south of the provincial capital Jinan. It extends from 150 to 1,545 metres above sea level and covers an area of 426 square kilometers at its base. The Jade Emperor Peak is located at 36° 16′N and 117° 6′E." [5]

Archaeological evidence and ancient textual inscriptions attest to the venerability of human habitation on and around Mount Tai, with some traces dating as far back as the Paleolithic period. From a very early period, this imposing natural wonder was ascribed with supernatural powers, to the extent that it gradually came to be worshiped as a deity in its own right. More specifically, "its deity, the Great Emperor of the Eastern Peak (Tai-yüeh tai-ti) is … generally believed to rule over earth and mankind. He is subordinate only to the Jade Emperor. His most important task is to determine the dates of a person's birth and death."[6] Moreover, this reputation for sanctity is so pervasive that it utterly transcends religious boundaries:

From time immemorial, the people have personified the mountain or imagined that it has a soul, or is inhabited by a spirit, which is alluded to as the genius of the mountain. This has been given names, which have changed in different epochs. In 1369 the Buddhist founder of the Ming Dynasty decreed that worship should be offered to Tung Yo T'ai Shan. When Taoist influence becomes predominant, Tai Shan has a birthday, and is the abode of a multitude of spirits, and has to do with the birth, death, adversity and prosperity of mortals, while the little hill of Kao Li at its foot is closely associated with the judgment of human souls after death.[7]

The role of the mountain in determining the fates of the living and dead has, over the years, prompted the construction of a large volume of murals and statuary dedicated to depicting the horrors that will be faced in the afterlife by individuals who fail to live morally.[8] 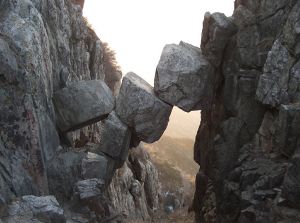 The Immortal Bridge, a natural landscape

Given its profound presence in the religious life of the Chinese people, it is perhaps unsurprising that the sacred mountain was a vitally important component of imperial cult's ritual practices. In particular, the feng and shan sacrifices (rituals conferring legitimacy to dynastic successors by earning the approbation of Heaven) were conducted in the foothills and at the peak of Mount Tai.[9] The historical locus of these practices was established with the legendary sage-ruler Shun, whose mythic precedent was sufficiently powerful to motivate many later monarchs to enact similar rituals. Indeed, many historical chronicles outline the legitimating role of Mount Tai for new monarchs, such as the Han Shu, which states: "As for Mount Tai, it is the sacred peak Daizong, the place where a true King announces a change of ruling family [to Heaven]."[10] Julia Ching's Mysticism and Kingship in China provides a cogent overview of this process:

We remember that Shun allegedly offered a burnt offering to Heaven at Mount T'ai, from where he also made sacrifices to the spirits of mountains and rivers. Although this could not be considered historical, it points to an ancient tradition that associated Mount T'ai, a sacred mountain, with kingship and ritual, as well as with shamanism and the cult of immortals. In the Analects (3:6) Confucius expressed disapproval when told that the chief of the Chi family was about to sacrifice to Mount T'ai. Apparently, it was regarded as an act of usurpation on the chief's part. Perhaps, primitive rituals to the mountain's spirits, or to Heaven and Earth and all other spirits, evolved later into a sacrificial ritual offered to the supreme Heaven. But only six historical rulers are known to have performed there the Feng and the Shan. And these include the first Ch'in emperor, Emperor Wu of Han, Emperors Kao-tsung and Hsüan-tsung of T'ang, and Emperor Jen-tsung of Sung. In each case, these sacrifices performed political functions in announcing to the world the legitimacy of the rulers, who proclaimed that they had received the Mandate of Heaven, and also brought peace to the world.[11]

The most famous of these royal pilgrimages was undoubtedly the one undertaken by Qin Shi Huang, the first emperor of China, who used these rites to symbolize his unification of the country. After completing the fengshan sacrifices, he mounted two inscriptions on the mountaintop to stand as testament to his influence and power: "The first begins: 'I have personally inspected the people of the distant lands, and ascended this Mount Tai, to comprehensively oversee the Eastern Limit.' The second includes such lines as 'the Emperor's virtue has preserved and fixed the Four Limits ... all within the six cosmic divisions is the land of the Emperor.'"[12]

In modernity, the tremendous cultural value of the site has been openly acknowledged, as described at Mount-tai.com:

Mount Tai has been a UNESCO World Heritage Site since 1987. In 2003, it attracted around 6 million visitors. A renovation project to be completed by late October 2005 aims at restoring cultural relics and the renovation of damaged buildings of cultural significance. Modern buildings which are inconsistent with the historic landscape are to be demolished. The total cost of the work is estimated at 15 million yuan (approximately US$1.8 million).[13] 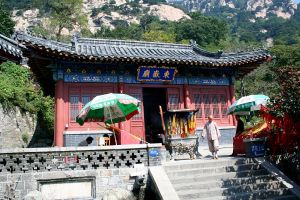 The mountain's official website provides details on some of the area's more important cultural sites:

The Temple of the God of Mount Tai, known as the Dai Temple (Dai Miao) is the largest and most complete ancient building complex in the area. It is located at the foot of Mount Tai in the city of Tai'an and covers an area of 96,000 square meters. The temple was first built during the Qin Dynasty. Since the time of the Han Dynasty (206 B.C.E. - 220 C.E.), its design has been a replica of the imperial palace, which makes it one out of three extant structures in China with the features of an imperial palace (the other two are the Forbidden City and the Confucius Temple in Qufu). The temple has five major halls and many small buildings. The centerpiece is the Palace of Heavenly Blessings (Tian Kuang), built in 1008, during the Northern Song Dynasty. The hall houses the mural painting "The God of Mount Tai Making a Journey," dated to the year 1009. The mural extends around the eastern, western and northern walls of the hall and is 3.3 metres high and 62 metres long. The theme of the painting is an inspection tour by the god. Next to the Palace of Heavenly Blessings stand the Yaocan Pavilion and the entrance archway as well as the Bronze Pavilion in the northeast corner. The Dai Temple is surrounded by the 2,100 year-old Han Dynasty cypresses.[15]

Retrieved from https://www.newworldencyclopedia.org/p/index.php?title=Mount_Tai&oldid=985591
Categories:
Hidden category:
This page was last edited on 26 November 2014, at 23:26.
Content is available under Creative Commons Attribution/Share-Alike License; additional terms may apply. See Terms of Use for details.