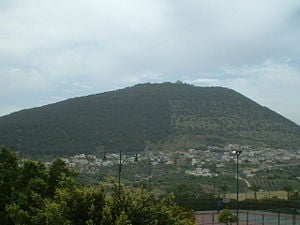 Mount Tabor (Hebrew: הר תבור, Greek: Όρος Θαβώρ) is situated in Lower Galilee at the eastern end of the Jezreel Valley in the Northern District of Israel, 17 kilometers (11 mi) west of the Sea of Galilee. Its elevation at the summit measures 575 meters (1,843 ft) above sea level. In biblical history, it was the site of the battle between the Israelite Barak and the Canaanite army commanded by Sisera. It was long believed that in the first century C.E. Tabor was the site of the Transfiguration of Christ, although Mount Hermon is now considered a more likely location.

During the Jewish Revolt of 66 C.E., Israelis under Flavius Josephus held out against Roman forces before running out of water and surrendering. It later became a Christian pilgrimage site, and changed hands several times during the Crusades.

In modern times, two Arab towns are located at its base: Shibli-Umm al-Ghanam to the east and Daburiyya to the west, as well as a Jewish community called Kfar Tavor. Mount Tabor is also known as Har Tavor, Itabyrium, and Jebel et-Tur.

The mountain is a horst—raised fault block bounded by normal faults formed from the extension of the Earth's crust—and is not volcanic. In spite of its proximity to the Nazareth mountains, it constitutes a separate geological form. Despite its modest height of 1,843 ft, it represents an impressive landmark, rising from a low-lying surrounding plain.

The mountain was entirely covered with typical area vegetation until the reign of the Ottoman Turks, during which period most of the trees were felled. As part of the Jewish National Fund's efforts to recreate the landscapes of the country, the area was reforested with trees which are similar to its original vegetation. Today, most of Mount Tabor is covered with pine trees. 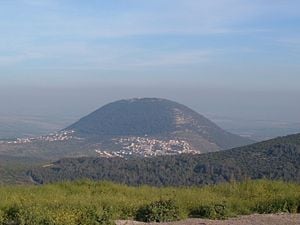 Mount Tabor's location on a major trade route and its command of the surrounding plains gave it an important strategic value.

Its location on an important road junction and its commanding formation above its environment gave Mount Tabor a strategic value. Several battles were conducted in its area in different periods of history.

The mountain is first mentioned in Joshua 19:22 as the border of three tribes: Zebulun, Issachar, and Naphtali. Tabor's importance stems from its strategic control of and important junction of roads. The Via Maris—the modern name for an ancient trade route dating from the early Bronze Age, which linked Egypt with the northern empires of Syria, Anatolia, and Mesopotamia—passed there from the Jezreel Valley northward towards Damascus.

According to the Book of Judges, Deborah the prophetess summoned the military chief Barak of the tribe of Naphtali and gave him God's command: "Go and draw toward Mount Tabor, and take with you ten thousand men of the children of Naphtali and of the children of Zebulun" (Judges 4:6). Barak agreed only on the condition that Deborah would accompany him, which she did. They then led their troops to the mountain's strategic high ground. Despite Sisera's superior strength, including 900 iron chariots, Deborah's strategy gave the Israelites a decided advantage. Descending from the mountain as Sisera's forces ascended, the Israelites attacked and vanquished their foes, and the heroine Jael soon killed the exhausted Sisera after luring him into her tent and lulling him to sleep.

Tabor was also the site of a battle between the Midianite kings Zebah and Zalmunna and certain Israelites, in which the Midianites prevailed but were later caught and executed by Gideon (Judges 8: 18-21). Some commentators, however, believe this "Tabor" should not be identified with the mountain, but is more likely associated with Gideon's own territory of Ophrah in Benjamin.

The "great tree of Tabor" was a well known landmark, possibly a sacred high place, on the way southward for those traveling to the holy site of Bethel. The prophet Samuel instructed the future King Saul to meet three pilgrims at this tree and receive their gifts of bread and wine (1 Samuel 10:3).

Psalm 89:12 mentions the mountain along with Mount Hermon in declaring its praise of God: "You created the north and the south; Tabor and Hermon sing for joy at your name." Jeremiah 46:18 likewise declares Tabor's outstanding character: "'As surely as I live,' declares the King, whose name is the Lord Almighty, 'one will come who is like Tabor among the mountains, like Carmel by the sea.'" 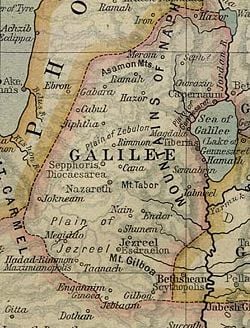 Once the kingdoms of Israel and Judah divided, Mount Tabor found itself in the unfortunate position of being on the wrong side of biblical history. Tabor's high place thus became a target of criticism by the prophets and priests who considered it and all northern shrines to be a source of corruption that prevented northern pilgrims from making their proper offerings at Jerusalem. The prophet Hosea thus declared:

Hear this, you priests! Pay attention, you Israelites!
Listen, O royal house! This judgment is against you:
You have been a snare at Mizpah, a net spread out on Tabor (Hosea 5:1).

This would be Tabor's final reference in the biblical record.

In the days of the Second Temple, Mount Tabor was one of the mountain peaks on which it was the custom to light beacons in order to inform the northern villages of holidays and of beginnings of new months.

In later Jewish history, the city of Atabyrium, which was situated on the mountain, was captured by Antiochus III in 218 B.C.E. During the Hasmonean period, Alexander Maccabeus (reigned 63 – 48 B.C.E.), the son of Aristobulus II, led a rebellion with an army of 31,000 men from Judea against the Roman statesman Aulus Gabinius of Syria, but was defeated at Mount Tabor. As many as 10,000 Jewish fighters were reportedly killed in the battle, and Alexander himself was captured and executed. 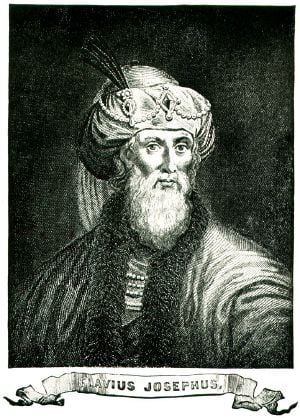 In 66 C.E., during the First Jewish-Roman War, the Galilean Jews under Josephus Flavius entrenched themselves at Mount Tabor, in order to defend against the Roman assault. Mount Tabor was one of 19 sites which the rebels in Galilee fortified, under the command of Josephus. According to his account in The Wars of the Jews, the emperor Vespasian sent an army of 600 cavalry to fight the rebels at Tabor. Their commander, Platsidus, understood that he could not reach the top of the steep mountain with these forces and therefore summoned the Jews to negotiate. A group descended from the mountain, but instead of parlaying with Platsidus, they attacked his forces. The Romans initially retreated, but returned toward the mountain and attacked, killing many of the rebels and blocking the retreat of the remaining rebels who tried to flee back up the mountain. Knowing they could not hold out for long, many of the entrenched rebels left Mount Tabor and returned to Jerusalem. The rest surrendered after their water ran out, handing the mountain over to the Romans.

After the defeat of the rebellion and destruction of the Second Temple in 70 C.E., Jewish settlement in and around Mount Tabor was renewed. 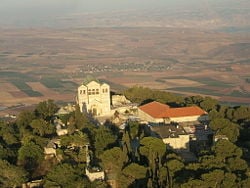 Aerial view of the Catholic Church of the Transfiguration at the summit.

The earliest identification of the Mount of Transfiguration as Tabor is by Origen in the third century. It is also mentioned by St. Cyril of Jerusalem and St. Jerome in the fourth century, and in the fifth century itinerary Transitus Beatae Mariae Virginis.

According to Christian tradition, Jesus climbed to an unnamed "high mountain" with three disciples and was glorified before them while conversing with Moses and Elijah. The scene is described in the Synoptic Gospels, as well as alluded to in 2 Peter, but neither account identifies the "high mountain" by name.

Contemporary scholars tend to see Mount Hermon as a more likely site than Tabor, due to the fact that Jesus and his disciples are described as being in nearby Caesarea Phillippi shortly before their ascent to the Mount of Transfiguration. However, Mount Tabor became a focus of Christian pilgrimage, beginning during the fourth century. According to descriptions of the pilgrims, during the sixth century, there were three churches on the top of the mountain, and during the eighth century there were four churches and a monastery. 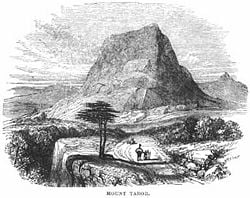 At the end of the nineteenth and the beginning the twentieth century the Bedouin tribe Arab-A Tzabiach settled in the mountain. Its members were employed by the neighboring Jewish settlements Kfar Tavor and Ilaniya, but disputed with them due to thefts. During the 1948 Arab–Israeli War, some members of the Arab-A Tzabiach tribe participated in the Arab Liberation Army of Fawzi al-Qawuqji which killed seven members of the village Beit Keshet. In May 1948, the Israeli infantry's Golani Brigade occupied Mount Tabor and most remaining members of the Arab-A Tzabiach tribe fled to Syria and Jordan, except for the clan of Shibli, whose members collaborated with Israel. After the war they became Israeli citizens in the village Arab Al-Shibli, which is now part of the village Shibli-Umm al-Ghanam.

In 1924, an impressive Roman Catholic church of the Franciscan order was built on the peak of Mount Tabor, called the Church of the Transfiguration. The church was built upon the ruins of a Byzantine church from the fifth or sixth century and a Crusader church from the twelfth century. The monastery's friars have lived near the church since the Ottoman control in 1873. 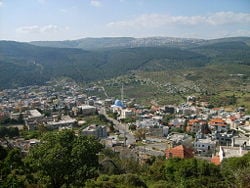 The Arab village of Daburiyya at the foot of Mount Tabor

Mount Tabor is located off of Highway 65, and its summit is accessible by personal vehicle via Shibli's access road. The peak itself is also traversed by the Israel National Trail. Today reaching the top of the mountain itself does not demand great effort, but before roads were built, a staircase of 4,340 stairs had to be climbed in order to arrive at the peak of the mountain.

There are two paths up the mountain: the long track, which starts from the Bedoiun village of Shibli, which is about five kilometers long; and a short nature track of about two and a half kilometers to the summit. The Israel National Trail ascends the mountain from the Gazit junction and Shibli village, surrounds the summit, and descends across to the Arab village of Daburiyya toward the Nazareth mountains.

Behind the monastery, remnants from the First Jewish–Roman War may be seen. On the paths there is a view of the Jezreel Valley, Mount Gilboa, the Samaria mountains, Mount Carmel, the Golan Heights, Gilead, the Lower Galilee, and the Upper Galilee. On clear days one can also see Mount Hermon.

Retrieved from https://www.newworldencyclopedia.org/p/index.php?title=Mount_Tabor&oldid=985594
Categories:
Hidden category:
This page was last edited on 26 November 2014, at 23:28.
Content is available under Creative Commons Attribution/Share-Alike License; additional terms may apply. See Terms of Use for details.