In the Hebrew Bible, Mount Hermon constituted part of the northern border of the Promised Land, and in the Book of Enoch it is the site of the descent of the fallen angels when they determined to take human wives on earth. In the New Testament, it is a likely candidate for the so-called "Mount of Transfiguration."

The summit of Mount Hermon is on the border between Syria and Lebanon, and is under Syrian control. The southern slopes of the mountain came under Israeli control following the Six-Day War in 1967. The mountain represents a crucial geographical resource as the source of the Jordan River. It is also the strategic high ground overlooking Lebanon, Syria, and Israel.

During the process of the conquest of Canaan, one of the Israelites' first acts was to conquer the Amorite King Sihon of Heshbon. They then marched north and defeated the mighty Og of Bashan. This legendary ruler was reported to be one of the last of the giant Rephaites, and his country extended east of the Jordan River from Gilead to Mount Hermon.

Mount Hermon was called Senir by the Amorites and Sirion by the Sidonians (Deuteronomy 3:9). The mountain served as the northern boundary of the land promised to the Israelites (Deuteronomy 3:8). It was also known as Mount Siyon (Deuteronomy 4:48).

The high places of Mount Hermon were apparently used by the Canaanites, who referred to the mountain as Mount Ba'al-Hermon (Judges 3:3). However, Psalm 89:12 reports that Mount Hermon was also dedicated to the Israelite God, for "Hermon sing(s) for joy at your name." Psalm 133 speaks poetically of the "dew of Mount Hermon" falling on Mount Zion, while the Song of Solomon sings of the lover's bride descending from "the summit of Hermon, from the lions' dens and the mountain haunts of the leopards."

Abode of the Nephilim 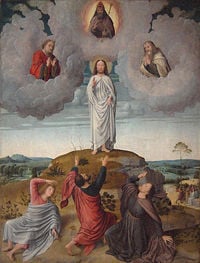 Jesus on the Mount of Transfiguration

In the apocryphal Book of Enoch, Mount Hermon is the place where the Grigori ("Watcher") class of fallen angels descended to Earth. They swore upon the mountain that they would take wives among the daughters of men and then return (Enoch 6), an act corresponding to description of the Nephilim of Genesis 6, which speaks of sexual relations between the "sons of God" and the "daughters of men." The Book of Jubilees (7:21-25) states that ridding the Earth of these Nephilim was one of God's purposes for flooding the world in Noah's time.

These works describe the Nephilim as being gigantic in stature, with prodigious strength and immense appetites. Some of the Nephilim reportedly survived the Flood (Numbers 13:33), and their lineage was thought to be preserved in the race of giants that spawned such champions as Og of Bashan, whose territory included Mount Hermon. The Philistine champion Goliath—who, like Og, was descended from a giant named Rapha—and several other huge warriors mentioned in the Bible were also thought to be related to these legendary beings originating from Mount Hermon.

Hermon as the Mount of Transfiguration

In the New Testament, the Gospels tell of Jesus and his disciples journeying north from Bethsaida on the Sea of Galilee to the city of Caesarea Philippi, which lay at the southern base of Mount Hermon (Matthew 16:13). There, Jesus revealed to them his purpose to build his church and to go to Jerusalem to die and be resurrected (Matthew 16:18-21).

From Caesarea Philippi, "Jesus took with him Peter, James, and John the brother of James, and led them up a high mountain by themselves" (Matthew 17:1). Mount Hermon is thus a possible site—indeed, it is considered by many to be by far the most likely location—of the Mount of Transfiguration, where the disciples witnessed Jesus' colloquy with the spirits of Moses and Elijah.

Mount Hermon Panoramic, from Manara on the Naftali heights

Mount Hermon is actually a cluster of mountains with three distinct summits, each about the same height. The entire range covers an area of about 1000 square km, of which about 70 square km are under Israeli control. The Anti-Lebanon range extends for approximately 150 km (93 miles) in a northeast-southwest direction, running parallel to the Lebanon range on the west.

Mount Herman forms one of the most important geographic resources of the area. Because of its height, it captures a great deal of precipitation in a very dry area of the world. Mount Hermon has seasonal snow which covers all three of its peaks for most of the year, especially in winter and spring. Melt water from the snow-covered mountain's western and southern bases seeps into the rock channels and pores, feeding springs at the base of the mountain, which form streams and rivers. These merge to become the Jordan River. Additionally, the runoff facilitates fertile plant life below the snow line, where vineyards and pine, oak, and poplar trees are abundant. The mountains' springs, as well as the mountain itself, are much contested by the nations of the region.

In Israel, Mount Hermon is also known as "the eyes of the nation" because its altitude makes it Israel's primary strategic early warning system. 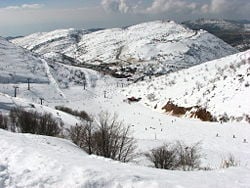 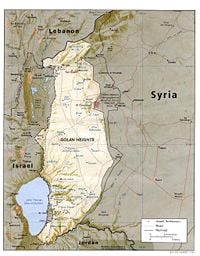 Since 1981, the Israeli region of Mount Hermon has been governed under Golan Heights Law. Mount Hermon has Israel's only ski resort, including a wide range of ski trails at novice, intermediate, and expert levels. It also offers additional winter family activities such as sledding and Nordic skiing. Those who operate the Hermon Ski area live in the nearby Israeli settlement of Neve Ativ and the Druze town of Majdal Shams. The ski resort has a ski school, ski patrol, and several restaurants.

The Israeli sector of the mountain is heavily patrolled by the Israel Defense Forces and the Israel Police. The Israeli Security Forces maintain a strategic observation post near Mitzpe Shlagim ("Snow Lookout") for monitoring Syrian and Lebanese military activity, at an elevation of about 2,224 m (7,300 feet). Its adjacent peak, at 2,236 m, is the highest elevation in Israel. The Syrian government recently unveiled plans to develop a multi-billion dollar ski resort on the higher Syrian slopes of the mountain.[1]

Since 1996, a small Lebanese group has climbed to the top of Mount Hermon annually for the feast of Jesus' Transfiguration on August 6. The group includes Christians of various denominations as well as Druze. Most of its members participate in a Maronite mass celebrated on the mountaintop. The 2006 climb, however, was canceled on account of war.

In 2005, the Lebanese municipality of Rashaya constructed a road for jeeps that reaches an altitude of 2,400 m. There are mixed opinions about the environmental and cultural aspects of this road, as well as its utility and necessity. The municipality also supported the building of a camping site and organizing trips to the top.