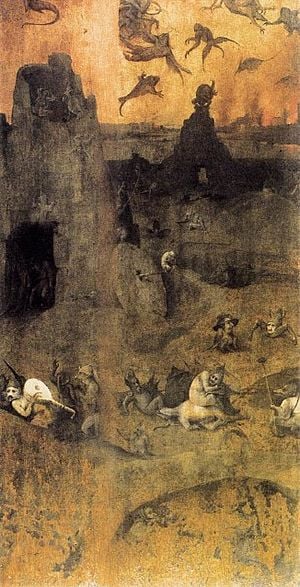 The Fall of the Rebel Angels by Hieronymus Bosch

Nephilim are supernatural beings, specifically the offspring of human women and “sons of God” (proposed to be giants or proto humans), who appear significantly in the Book of Genesis (Ch. 6) and are mentioned also in other biblical texts and in some non-canonical Jewish writings. Others consider the Nephilim, in contrast, to be the offspring of human men descended from Seth and human women descended from Cain.[1] Both interpretations say that the lustful breeding of the Nephilim was one of the provocations for the Great Flood at the time of Noah.

The Hebrew of “nephilim” is נפלים, which may mean “those causing others to fall.” Abraham Ibn Ezra says they were called this because men's hearts would fail at the sight of them. Targum Yerushalmi understands this appellation in light of the legend that they were fallen angels who were divorced from heaven. Some have compared it to the usage in Job 1:15 "And the Sabeans fell upon them" in which Naphal means to take in battle, describing the warriorlike nature of the Nephilim (Jean le Clerc and Aquilas). Alternatively, Shadal understands it as deriving from the Hebrew word פלא Pela which means "wondrous."[1]

The nephilim come from a union between “sons of God” (בני האלהים “b’nei ha-'elohim” Lit. "Sons of the powers"[2] and “daughters of man.”

In Aramaic culture, the term Nephila specifically referred to the constellation of Orion, and thus Nephilim to Orion's semi-divine descendants (cf. Anakim from Anak);[3] the implication being that this also is the origin of the Biblical Nephilim.

Some commentators have suggested that the Nephilim were believed to have been fathered by members of a proto-Hebrew pantheon (which causes much controversy among Jewish peoples[4]) and are a brief glimpse of early Hebrew religion, most of the details of which were later edited out from the Torah (or at least would have been edited out when, as some claim, it was redacted together), and that this passage may have offered monotheistic Hebrews a way to fit semi-divine pagan heroes into their cosmogony.

The idea that the Torah was somehow changed is not in keeping with traditional Hebrew practice, in which if even a single character is out of place in a parchment translation of the original Hebrew Torah, the entire parchment must be destroyed and replaced anew. However, there are several variations, some of great significance, between ancient manuscripts of the Torah, between Septuagint, Syriac Peshitta, Dead Sea Scrolls, masoretic text, Samaritan Pentateuch, and the versions in the Hexapla, as well as between various manuscripts within each of these groups.

In the Hebrew Bible, there are a number of other words that, like "Nephilim," are sometimes translated as "giants":

This has led to a great deal of confusion, even to the point of medieval legends recounted in the Talmud of a giant stowing away on Noah's Ark. It is possible that these names in the Torah were not meant to signify any antediluvian race that survived the Great Flood, but were simply denotations for particular groups of Canaanites, or other ordinary ethnicities.

The first reference to the Nephilim appears quite early in the Bible, found in Genesis 6:1–4, which describes the origin of the Nephilim as part of the “increasing wickedness of mankind." These beings co-existed with humankind until the flood with a moral orientation:[5]

When men began to multiply on earth and daughters were born to them, the sons of heaven saw how beautiful the daughters of man were, and so they took for their wives as many of them as they chose. Then the Lord said: “My spirit shall not remain in man forever, since he is but flesh. His days shall comprise one hundred and twenty years.” At that time the Nephilim appeared on earth (as well as later), after the sons of heaven had intercourse with the daughters of man, who bore them sons. They were heroes of old, men of renown.[6]

The Book of Numbers (13:33) also contains an allusion to the Nephilim in how the Israelites likened the tall aborigines (“Anakim”) to the Nephilim, possibly due to seeing the “megalithic structures” of Canaan that appeared to have been built by a race of giants, whose superhuman strength was attributed to semi-divine origin.[7]

The Letter of Jude draws upon the statements set forth in Genesis, referring implicitly to the paternity of Nephilim as heavenly beings who came to earth and had sexual intercourse with women:[8]

"The angels too, who did not keep to their own domain but deserted their proper dwelling, he has kept in eternal chains, in gloom, for the judgement of the great day. Likewise, Sodom, Gomorrah, and the surrounding towns, which, in the same manner as they, indulged in sexual promiscuity and practiced unnatural vice, serve as an example by undergoing a punishment of eternal fire."[9]

However, the phrase “practiced unnatural vice”—translated literally as “went after alien flesh”—refers to the desires for sexual intimacies by human beings with angels, which is the reverse of the account in Genesis, where heavenly beings (angels) sought after human flesh.[10]

"Rephaim" is a general title that the Book of Joshua states was given to the aborigines who were afterwards conquered and dispossessed by the Canaanite tribes).[11] The text states that a few Rephaim had survived, one of them being Og, the king of Bashan. Og of Bashan is recorded as having a 13-foot-long bed.

"Only Og king of Bashan was left of the remnant of the Rephaites. His bed was made of iron and was more than thirteen feet long and six feet wide. It is still in Rabbah of the Ammonites."[12]

The Rephaim may have been the same Canaanite group known to the Moabites as Emim,[13] i.e., fearful, and to the Ammonites as Zamzummim. The second of the Books of Samuel states that some of them found refuge among the Philistines, and were still existing in the days of David. Nothing is known of their origin, nor of anything specifically connecting them with Nephilim, though the connection is made by Jewish tradition.

Anakim are the descendants of Anak, and dwelt in the south of Canaan, in the neighborhood of Hebron. In the days of Abraham, they inhabited the region afterwards known as Edom and Moab, east of the Jordan river. They are mentioned during the report of the spies about the inhabitants of the land of Canaan. The book of Joshua states that Joshua finally expelled them from the land, excepting a remnant that found a refuge in the cities of Gaza, Gath, and Ashdod. The Philistine giant Goliath, whom David, or Elhanan,[14] later encountered, was supposedly a descendant of the Anakim:

The land, through which we have gone to spy it out, is a land that devours its inhabitants, and all the people that we saw in it are of great height. And there we saw the Nephilim (the sons of Anak, who come from the Nephilim), and we seemed to ourselves like grasshoppers, and so we seemed to them.[15]

The Sumerians called their gods the Anunaki. Abraham was the son of an idol manufacturer in the Sumerian city of Ur, and so could reasonably be expected to have known about these gods. Whether via the knowledge of a historical Abraham, or via folk memory that passed down to the Yahwist, the words Anak and its plural (Anakim) could simply be corrupted versions of Anunaki; this would equate the Nephilim with the Sumerian demigods such as Gilgamesh.

Note that it is more commonly suggested by traditional Jewish sources (such as the Midrash) that the spies saw large and powerful inhabitants in Canaan and because of their own fears, cowardice, and inadequate faith in Yahweh, saw themselves as grasshoppers in the eyes of the Canaanites, whether they were actual 'giants' or not.

Main articles: Book of Enoch, Jubilees, Book of, and Grigori

In the texts of Ugarit, there were 70 sons of God, each one being the special deity of a particular people from whom they were descended. Some memory of this is found in Biblical texts which speak of Baal Melkart of Tyre or Chemosh of Moab.

The story of the Nephilim is chronicled more fully in the Book of Enoch (part of Ethiopian biblical canon). Enoch, as well as Jubilees, connects the origin of the Nephilim with the fallen angels, and in particular with the Grigori (watchers). Samyaza, an angel of high rank, is described as leading a rebel sect of angels in a descent to earth to instruct humans in righteousness. The tutelage went on for a few centuries, but soon the angels pined for the human females and began to instruct the women in magic and conjuring. The angels consummated their lust, and as a result produced hybrid offspring: the Nephilim.

According to these texts, the fallen angels who begat the Nephilim were cast into Tartarus/Gehenna, a place of 'total darkness'. However, Jubilees also states that God granted ten percent of the disembodied spirits of the Nephilim to remain after the flood, as demons, to try to lead the human race astray (through idolatry, the occult, etc.) until the final Judgment Day.

In addition to Enoch, the Book of Jubilees (7:21-25) also states that ridding the Earth of these Nephilim was one of God's purposes for flooding the Earth in Noah's time. The Biblical reference to Noah being "perfect in his generations" may have referred to his having a clean, Nephilim-free bloodline, although it may be inferred that there was more diversity among his three daughters-in-law.

These works describe the Nephilim as being gigantic in stature, with prodigious strength and immense appetites. Supposedly, upon devouring all of humankind's resources, the Nephilim had begun to consume humans themselves, and attacked and oppressed them, becoming the cause of massive destruction on the earth.

There are also allusions to these descendants in the deuterocanonical books of Judith, Sirach, Baruch, 3 Maccabees, and Wisdom of Solomon.

Zecharia Sitchin[16] and Erich Von Daniken both claim that the Nephilim are the ancestors of humankind. In Sitchin's voluminous works, he uses Semitic language etymology and translations of Sumerian cuneiform tablets to equate the ancient Mesopotamian gods with the fallen angels (the "sons of Elohim" in Genesis). The chief Sumerian deity was known as Enlil, and a group of these Anunnaki were sent down to the Earth from their home planet Nibiru. The leader of this mission was Enlil's half-brother (known first as Ea and then given the title Enki, or Lord of the Earth). His symbol was the snake or two snakes wrapped around a pole. This symbol, called the cadeuseus (alt. spelling caduseus and cadeuceus), was used to denote the Egyptian god Thoth, the Greek god Hermes, and the Roman god Mercury among others. All of these deities were given titles such as "God of Knowledge," "Bringer of Wisdom," and "Messenger of the Gods." The Hebrew word for angel is Malakh, and means "messenger" (while the word "angel" itself derives from the Greek "angelos"—also meaning messenger). The Sumerian gods worshiped by the Babylonians, Assyrians, Hittites and others) were nearly always depicted with wings as well.