Bosch used images of demons, half-human animals and machines to evoke fear and confusion to portray the evil of man. His works contain complex, highly original, imaginative, and dense use of symbolic figures and iconography, some of which was obscure even in his own time.

His masterpiece, The Garden of Earthly Delights (or The Millennium)[1] is a fully mature work of intricate complexity. The triptych depicts several biblical and heretical scenes that illustrate the history of mankind according to medieval Christian doctrine.

Hieronymus Bosch was born Jheronimus (or Jeroen) van Aken (meaning "from Aachen"). He signed a number of his paintings as Bosch (pronounced Boss in Dutch). The name derives from his birthplace, 's-Hertogenbosch, which is commonly called "Den Bosch."

Little is known of Bosch’s life or training. He left behind no letters or diaries, and what has been identified has been taken from brief references to him in the municipal records of 's-Hertogenbosch, and in the account books of the local order of the Brotherhood of Our Lady. Nothing is known of his personality or his thoughts on the meaning of his art. Bosch’s date of birth has not been determined with certainty. It is estimated at c. 1450 on the basis of a hand drawn portrait (which may be a self-portrait) made shortly before his death in 1516. The drawing shows the artist at an advanced age, probably in his late sixties.[2]

Bosch was born and lived all his life in and near ‘s-Hertogenbosch, the capital of the Dutch province of Brabant. His grandfather, Jan van Aken (died 1454), was a painter and is first mentioned in the records in 1430. It is known that Jan had five sons, four of whom were also painters. Bosch’s father, Anthonius van Aken (died c. 1478) acted as artistic adviser to the Brotherhood of Our Lady.[3] It is generally assumed that either Bosch’s father or one of his uncles taught the artist to paint, however none of their works survive.[4] Bosch first appears in the municipal record in 1474, when he is named along with two brothers and a sister.

's-Hertogenbosch, in the south of the present-day Netherlands, was a flourishing city in fifteenth century Brabant. In 1463, 4000 houses in the town were destroyed by a catastrophic fire, which the then (approximately) 13-year-old Bosch may have witnessed. He became a popular painter in his lifetime and often received commissions from abroad. In 1488 he joined the highly respected Brotherhood of Our Lady, an arch-conservative religious group of some 40 influential citizens of 's-Hertogenbosch, and 7,000 'outer-members' from around Europe.

Some time between 1479 and 1481, Bosch married Aleyt Goyaerts van den Meerveen, who was a few years older than the artist. The couple moved to the nearby town of Oirschot, where his wife had inherited a house and land from her wealthy family.[5]

An entry in the accounts of the Brotherhood of Our Lady records Bosch’s death in 1516. A funeral mass served in his memory was held in the church of Saint John on 9th August of that year.[6]

Bosch never dated his paintings and may have signed only some of them (other signatures are certainly not his). Fewer than 25 paintings remain today that can be attributed to him. Philip II of Spain acquired many of Bosch's paintings after the painter's death; as a result, the Prado Museum in Madrid now owns several of his works, including The Garden of Earthly Delights.

The Garden of Earthly Delights 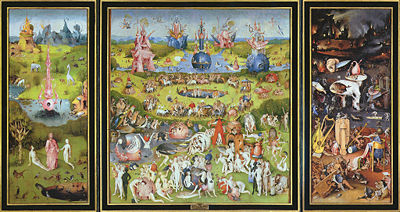 The Garden of Earthly Delights is a triptych made by Hieronymus Bosch.

Bosch produced several triptychs. Among his most famous is The Garden of Earthly Delights (or The Millennium)[7] Bosch's masterpiece reveals the artist at the height of his powers; in no other painting does he achieve such complexity of meaning or such vivid imagery.[8] The triptych depicts several biblical and heretical scenes on a grand scale and as a "true triptych," as defined by Hans Belting,[9] was probably intended to illustrate the history of mankind according to medieval Christian doctrine.

This painting depicts paradise with Adam and Eve and many wondrous animals on the left panel, the earthly delights with numerous nude figures and tremendous fruit and birds on the middle panel, and hell with depictions of fantastic punishments of the various types of sinners on the right panel. When the exterior panels are closed the viewer can see, painted in grisaille, God creating the Earth. These paintings have a rough surface from the application of paint; this contrasts with the traditional Flemish style of paintings, in which the smooth surface attempts to hide the fact that the painting is man-made.

The triptych is a work in oil comprising three sections: a square middle panel flanked by rectangular ones that can close over the center as shutters. These outer wings, when folded shut, display a grisaille painting of the earth during the Creation. The three scenes of the inner triptych are probably intended to be read chronologically from left to right. The left panel depicts God presenting to Adam the newly created Eve. The central panel is a broad panorama of sexually engaged nude figures, fantastical animals, oversized fruit, and hybrid stone formations. The right panel is a hellscape and portrays the torments of damnation.

Generally, the work is described as a warning against lust, and the central panel as a representation of the transience of worldly pleasure. In 1960, the art historian Ludwig von Baldass wrote that Bosch shows "how sin came into the world through the Creation of Eve, how fleshly lusts spread over the entire earth, promoting all the Deadly Sins, and how this necessarily leads straight to Hell".[13] De Tolnay wrote that the center panel represents "the nightmare of humanity," where "the artist's purpose above all is to show the evil consequences of sensual pleasure and to stress its ephemeral character".[14] Supporters of this view hold that the painting is a sequential narrative, depicting mankind's initial state of innocence in Eden, followed by the subsequent corruption of that innocence, and finally its punishment in Hell. At various times in its history, the triptych has been known as La Lujuria, The Sins of the World and The Wages of Sin.

Proponents of this idea point out that moralists during Bosch's era believed that it was woman's—ultimately Eve's—temptation that drew men into a life of lechery and sin. This would explain why the women in the center panel are very much among the active participants in bringing about the fall. At the time, the power of femininity was often rendered by showing a female surrounded by a circle of males. A late fifteenth-century engraving by Israhel van Meckenem shows a group of men prancing ecstatically around a female figure. The Master of the Banderoles's 1460 work the Pool of Youth similarly shows a group of females standing in a space surrounded by admiring figures.

Writing in 1969, E. H Gombrich drew on a close reading of Genesis and the Gospel According to Saint Matthew to suggest that the central panel is, according to Linfert, "the state of mankind on the eve of the Flood, when men still pursued pleasure with no thought of the morrow, their only sin the unawareness of sin."

In earlier centuries it was often believed that Bosch’s art was inspired by medieval heresies and obscure hermetic practices. Others thought that his work was created merely to titillate and amuse, much like the "grotteschi" of the Italian Renaissance. While the art of the older masters was based in the physical world of everyday experience, Bosch confronts his viewer with, in the words of the art historian Walter Gibson, "a world of dreams [and] nightmares in which forms seem to flicker and change before our eyes."

In the first known account of Bosch’s paintings, in 1560 the Spaniard Felipe de Guevara wrote that Bosch was regarded merely as "the inventor of monsters and chimeras." In the early seventeenth century, the Dutch art historian Karel van Mander described Bosch’s work as comprising "wondrous and strange fantasies," however he concluded that the paintings are "often less pleasant than gruesome to look at."[15]

In the twentieth century, scholars have come to view Bosch’s vision as less fantastic, and accepted that his art reflects the orthodox religious belief systems of his age. His depictions of sinful humanity, his conceptions of Heaven and Hell are now seen as consistent with those of late medieval didactic literature and sermons. Most writers attach a more profound significance to his paintings than had previously been supposed, and attempt to interpret it as an expression of a late medieval morality. It is generally accepted that Bosch’s art was created to teach specific moral and spiritual truths, and that the images rendered have precise and premeditated significance. According to Dirk Bax, Bosch’s paintings often represent visual translations of verbal metaphors and puns drawn from both biblical and folkloric sources.[16]

Some writers see Bosch as a proto-type medieval surrealist, and parallels are often made with the twentieth century Spanish artist Salvador Dali. Other writers attempt to interpret his imagery using the language of Freudian psychology. However, such theses require a translation of the symbolic system of Medieval Christianity to that of the modern age; according to Gibson, "what we choose to call the libido was denounced by the medieval church as original sin; what we see as the expression of the subconscious mind was for the Middle Ages the promptings of God or the Devil."[17]

The exact number of Bosch's surviving works has been a subject of considerable debate. He signed only seven of his paintings, and there is uncertainty whether all the paintings once ascribed to him were actually from his hand. It is known that from the early sixteenth century onwards numerous copies and variations of his paintings began to circulate. In addition, his style was highly influential, and was widely imitated by his numerous followers.[18]

Over the years, scholars have attributed to him fewer and fewer of the works once thought to be his, and today only 25 are definitively ascribed to him. When works come up for auction, they are sometimes attributed to Hieronymus Bosch Workshop.

Many of the works of the early Netherlandish artist Hieronymus Bosch, a partial list of which is provided here with current locations, have been given multiple names when translated. 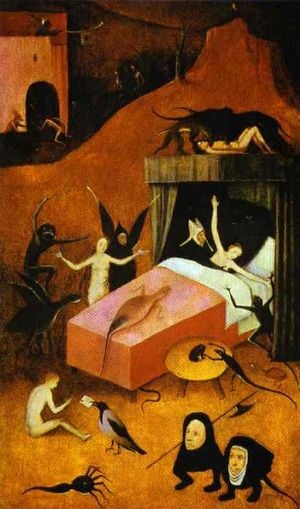 Death of the Reprobate 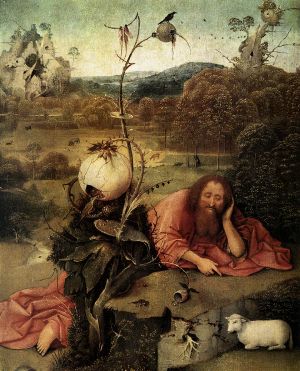 Saint John the Baptist in the Wilderness 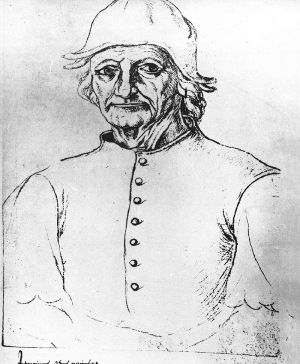 Retrieved from https://www.newworldencyclopedia.org/p/index.php?title=Hieronymus_Bosch&oldid=1064893
Categories:
Hidden category:
This page was last edited on 12 February 2022, at 23:47.
Content is available under Creative Commons Attribution/Share-Alike License; additional terms may apply. See Terms of Use for details.