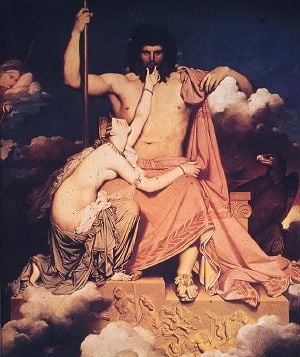 Hieros Gamos (Greek ιερός γάμος, "sacred wedding"), or Hierogamy, refers to the coupling of a god and goddess or their earthly representatives, often having a symbolic meaning related to fertility and generally conducted in the spring. It can also refer to the primordial union of the masculine and feminine principles within the godhead.

The concept of the hieros gamos derives from ancient mythologies relating to the union of the first deity and his or her consort(s). In terms of the ritual expression of this idea, the heavenly marriage historically took three forms:

The tradition of heiros gamos was usually performed in agricultural societies where these unions were understood to bring rain and fertility to the land, especially in the Middle East. The priestess or priest could also stand for the deity in relationship to citizens or travelers in the practice of "sacred harlotry."

The formal ritual sometimes, but not always, involved actual sexual intercourse. Documented examples normally involved a public procession, an exchange of gifts, the purification of the couple enacted in the ceremony, a wedding feast, the preparation of the marriage chamber, and an act of intercourse, either actual or symbolic. A festival on the following morning often celebrated the blessings brought to the community as a result: The union of heaven and earth resulting in the continuity of life's cycle of rain, fertility, procreation, and abundance. In ancient Sumerian cosmology, heaven (An) and earth (Ki) were originally a single entity, the sacred mountain Anki. The lower valley-like part of Anki, earth, was female; while its upper summit, heaven, was male.

The Babylonian creation myth Enuma Elish begins with a description of the generation of the cosmos through the co-mingling of the "waters" of heaven and earth in the persons of the male deity Apsu, and the sea-goddess Tiamat. The union of Apsu's fresh water with Tiamat's salt water spawned both the gods and civilization.

When on high the heaven had not been named,
Firm ground below had not been called by name,
When primordial Apsu, their begetter,
And Tiamat, she who bore them all,
Their waters mingled as a single body,
No reed hut had sprung forth, no marshland had appeared,
None of the gods had been brought into being,
And none bore a name, and no destinies determined—
Then it was that the gods were formed in the midst of heaven.

The world's oldest epic poem, the Epic of Gilgamesh, evidences a culture in which the enactment of the hieros gamos by humans was a well established practice, and sexual union with the priestesses of the goddess Ishtar was seen as a civilizing function in the city of Uruk. When Gilgamesh discovers his nemesis, the wild man Enkidu, Gilgamesh's strategy for civilizing him is to send Shamhat, the priestess of Ishtar, to teach Enkidu how to live as a cultured human being. She first uses her feminine charms to seduce him into a week-long sexual initiation and then teaches him the other ways of civilized men.

The sacred marriage of the king of a Sumerian city-state and the High Priestess of Inanna, is also attested in several other historical sources.

The hieros gamos in ancient Canaan seems to have been generally inherited from its older Mesopotamian counterparts. The original heavenly marriage is between the sky god El and his consort, Lady Ashera of the Sea.

In the Urgaritic literature, the major deity, Baal, was the god of rain and storm, and thus fertility for crops. He is killed by the desert god of death, Mot, but with the help of his sister-wife Anat, he proves victorious over the deity of dryness and sterility. Anat, the ever-virgin goddess of dew and war, joins with him and gives birth to a sacred bull—the symbol of Baal himself—which she presents to him at Mount Saphon. This theme of the dying-and-resurrecting god associated with a Goddess who is both mother and wife to him is seen in many cultures. Examples include Isis and Horus in Egyptian civilization, and various myths regarding Ishtar, Cybele, Aprodite, Venus, and other goddesses in the semitic and Greco-Roman civilization.

Human enactments of the hieros gamos in Canaan are inferred by accounts in the Hebrew Bible, which refer to them frequently by way of denunciation.

Hierogamy in the Hebrew Bible

Modern scholars such as Joseph Campbell hold that the creation story of the Book of Genesis represents a retelling of the Enuma Elish creation myth. Here, the vision of Aspu and Tiamat's coupling is condensed into the formula:

Now the earth was formless and empty, darkness was over the surface of the deep, and the Spirit of God was hovering over the waters. (Gen 1:2)

In this view, the Mesopotamian vision of the marriage between heaven (God) and earth (the salt-water ocean) was inherited by the early Hebrews, who participated in hieros gamos rituals until at least the time of the Babylonian exile. The story of Eve and the Serpent, according to this theory, is an inverted version of earlier mythologies in which the serpent diety was originally the natural consort of the Mother Goddess. In the biblical version, however, both Eve and the serpent are cursed by the sovereign male deity, Yahweh. This reversal of roles is thought to be the result of the patriarchal system of Israel imposing itself on the older mythology of Canaan and Egypt. Campbell points out that the serpent plays a positive role in the old legends of Moses, who carries a powerful rod which has the power to turn itself into a serpent (Ex. 4) and is commanded by God to create and uplift a brozne serpent icon which heals the Israelites (Num. 21).

A biblical instance of a sacred harlot probably associated with the tradition of hieros gamos concerns the patriarch Judah in the Book of Genesis. Judah, whose lineage is about to expire, goes to the town of Timnah for a spring sheep-shearing festival, where he has sexual relations with a veiled sacred harlot near the town gate. The woman is actually his daughter-in-law Tamar, who bears him twin sons that become the forefathers of the Tribe of Judah.

Later, such practices were strongly condemned by the prophets and writers of biblical histories. Deuteronomy 23:17 forbids the practice which Tamar imitated, saying: "No Israelite man or woman is to become a shrine prostitute." The prophet Jeremiah complained: "Have you seen what faithless Israel has done? She has gone up on every high hill and under every spreading tree and has committed adultery there" (Jeremiah 3:6).

The Books of Kings refer to male shrine prostitutes as common in the Kingdom of Judah as early as the days of King Rehoboam (tenth century B.C.E.) and as late as King Josiah (late seventh century B.C.E.): "He (Josiah) also tore down the quarters of the male shrine prostitutes, which were in the temple of the Lord and where women did weaving for Asherah" (2 Kings 23:7).

On the other hand, the ancient tradition of the deity's conjugal relations with the people of the land found its way into the Jewish tradition when the prophets Isaiah and Jeremiah both referred to God as the "husband" of Israel. Speaking of the city of Jerusalem, Isaiah wrote: "As a bridegroom rejoices over his bride, so will your God rejoice over you" (Isaiah 62:4). In later tradition, the Sabbath would be welcomed by the faithful congregation in the role of a Bride, and the Shekhinah would be seen as a feminine aspect of God that, among other things, plays a wifely role to a tzaddik, or holy man.

Finally, the Song of Solomon, although it has many interpretations, is often cited as an example of the literature of hieros gamos. 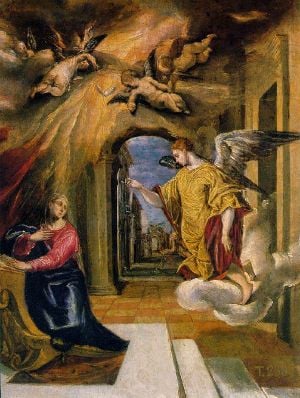 Gabriel and the Virgin Mary, The Annunciation by El Greco as an example of hieros gamos.

The story of the Virgin Mary conceiving through the power of the Holy Spirit, then giving birth to Jesus as God the Son, and cooperating with him after her own assumption as the Queen of the Angels, has been seen as an example of the above-mentioned tradition of goddesses and their divine dying-and-resurrecting sons (Campbell 1991).

In early Christian literature, the idea of the hieros gamos may also be seen in the portrayal of Christ as a "bridegroom," with the people of God in the position of his bride.

I saw the Holy City, the new Jerusalem, coming down out of heaven from God, prepared as a bride beautifully dressed for her husband. And I heard a loud voice from the throne saying, "Now the dwelling of God is with men, and he will live with them.

The concept of the hieros gamos is also seen in the gnostic literature. Here, the concept and ceremony of the "bridal chamber" represented the union of Christ, in the position of bridegroom, and the believer, in the position of bride. Some gnostic sects were accused by orthodox Christians of not only affirming the church's role as the Bride of Christ, but also of engaging in licentious hieros gamos rites. 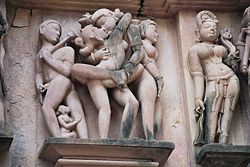 In Tantric Yoga, the male and female participants are conjoined physically and represent Shiva and Shakti, the deities representing the male and female principles. The union may be seen as an enactment of the principle of hieros gamos. Several sexual rituals are recommended and practiced. These involve elaborate and meticulous preparatory and purificatory rites. The act, when properly practiced, eventually culminates in samadhi, wherein the respective individualities of each of the participants are completely dissolved in the unity of cosmic consciousness.

Tantrics understand the act on multiple levels. The union of male and female in the sexual act serves, in effect, to incarnate the divine principles of masculinity and feminity. Beyond the physical act, however, a subtle fusion of Shiva and Shakti energies takes place resulting in a united energy field. On an individual level, each participant experiences a fusion of their own Shiva and Shakti energies.

A modern example of hierogamy is seen in the religion of Wicca. In some forms of this tradition, participants engage in what is called the Great Rite. Most often done on Beltane night (May 1), a man and a woman, assuming the identities of God and Goddess, engage in sexual intercourse to celebrate the union of the deities as lovers and the conception of the new God who will be born at Yule. It is essentially a fertility rite, meant to symbolize the planting of seed into Mother Earth, which will come to fruition in the autumn.

In Unification tradition, husband and wife strive to become individual incarnations of God's masculine and feminine energies, respectively, by uniting their mind and body centering on God as individuals, and then as a married couple. The fullest expression of God's love is seen as manifesting itself in the sexual union of a married couple, followed by the couple's becoming "true parents" to their children in the position of God's "grandchildren."