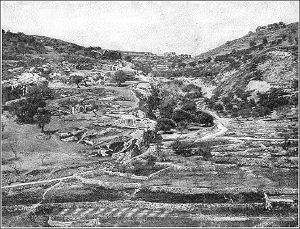 In Judaism, Gehenna (or Ge-hinnom) is a fiery place where the wicked are punished after they die or on Judgment Day, a figurative equivalent for "Hell." Gehenna also appears in the New Testament and early Christian writings, and is known in Islam as Jahannam. The powerful imagery of Gehenna originates from a ancient real place; thus Gehenna serves an example of the interplay between literal and symbolic meanings in scripture.

The word derives from the Hebrew: גי(א)-הינום Gêhinnôm (also Guy ben-Hinnom (גיא בן הינום) meaning the Valley of Hinnom's son. The valley forms the southwest border of ancient Jerusalem that stretches from the foot of Mt. Zion to the Kidron Valley. It is first mentioned in Joshua 15:8. Originally it referred to a garbage dump in a deep narrow valley right outside the walls of Jerusalem where fires were kept burning to consume the refuse and keep down the stench. It is also the location where bodies of executed criminals, or individuals denied a proper burial, would be dumped. In addition, this valley was frequently not controlled by the Jewish authority within the city walls; it is traditionally held that this valley was used as a place of religious child-sacrifice to Moloch by the Canaanites outside the city (comp. Jer. 2: 23).

According to the Hebrew Bible, pagans once sacrificed their children to the idol Moloch in the fires in Gehenna. It is said that priests would bang on their drums (תופים) so that the fathers would not hear the groans of their offspring while they were consumed by fire. The Prophets condemned such horrid practices of child sacrifice toward Moloch, which was an abomination (2 Kings, 23:10), and they predicted the destruction of Jerusalem as a result:

And you shall go out to the Ben-Hinnom Valley which is at the entrance of the Harsith Gate, and you shall call there the words that I will speak to you.
And you shall say; Hearken to the word of the Lord, O kings of Judah and inhabitants of Jerusalem; so said the Lord of Hosts, the God of Israel; Behold I am bringing evil upon this place, which whoever hears, his ears will tingle.
Because they forsook Me and they estranged this place and burnt incense therein to other gods, which they had not known, they, their forefathers, and the kings of Judah, and they filled this place with the blood of innocent people.
And they built the high places of Baal to burn their children with fire as burnt offerings to Baal, which I did not command, neither did I speak nor did it enter My mind.
Therefore, behold days are coming, says the Lord, when this place will no longer be called Topheth or Ben-Hinnom Valley, but the Valley of Slaughter." (Book of Jeremiah 19:2-6)

The rabbinic tradition draws a distinction between Sheol and Gehenna or "Gehinnom." Originally, Judaism described life after death as a bleak underworld named Sheol, which was known as the common pit or grave of humanity. However, with the influence of Persian thought and the passing of time, the notion of "hell" crept into Jewish tradition and became associated with the Biblical word Gehinnom or Gei Hinnom (the valley of Hinnom (Joshua 15:8, 18:16; II Kings 23:10; Jeremiah 7:31; Nehemiah 11:30). This view of hell was allegedly imported into Judaism from Zoroastrianism, and it appears to have supplanted the earlier concept of Sheol (mentioned in Isaiah 38:18, Psalms 6:5 and Job 7:7-10).

Jews who embraced this view of hell included the group known as the Pharisees. The larger, dogmatically conservative Sadducees maintained their belief in Sheol. While it was the Sadducees that represented the Jewish religious majority it was the Pharisees who best weathered Roman occupation, and their belief in Zoroaster's heaven and hell was passed on to both Christianity and Islam (in which heaven is referred to as Jannah).

In subsequent centuries, rabbinic literature expounded on Gehenna as a place (or state) where the wicked are temporarily punished after death. The godly, meanwhile, await Judgment Day in the bosom of Abraham. “Gehenna” is sometimes translated as "hell," but the Christian view of hell differs from the Jewish view of Gehenna. Most sinners are said to suffer in Gehenna no longer than twelve months, but those who commit certain sins are punished forever.[1]

Gehenna is often mentioned in the New Testament of the Christian Bible as the place of condemnation of unrepentant sinners. For example, in the Book of Matthew, 23:33, Jesus observes,

"Ye serpents, ye generation of vipers, how can ye escape the damnation of hell?”

Jesus used the word gehenna, not hell, and his audience understood gehenna was an allegorical phrase likening the fate of the "generation of vipers" to that of garbage; the Revised Standard Version of the Bible has a footnote after the word hell reading:

The King James Version of the Bible speaks of “hellfire” and of being “cast into hell, into the fire that shall never be quenched." The original Greek scriptures of the New Testament actually used the word gehenna, which tended to become hell in English.

It is said that the garbage dump of Gehenna was full of rotting garbage, which sent up a stench that could be smelled for miles. There are stories of fires that were kept burning via the adding of brimstone (sulfur). Hackett explains, "It became the common lay-stall garbage dump of the city, where the dead bodies of criminals, and the carcasses of animals, and every other kind of filth was cast."

The word Gehenna (Gehennem, Jahannam) also occurs in the Muslim holy book, the Qur'an, as a place of torment for sinners or Islamic equivalent to hell.

According to Islamic accounts, during the Day of Judgment all men and women are made to cross over a deep abyss, whence the flames of Jahannam (Gehenna) leap up, on al-Sirât (الصراط), a thorny bridge so thin that it cannot be seen. It is said in the Hadiths that those destined for paradise are able to cross quickly and safely, seeing it as a thick stone bridge, whereas others fall off into Jahannam (Gehenna). However, it is added that the decision of who is sent to paradise or to Jahannam (Gehenna) is a matter in Allah's hands alone. Thus, in Islam, Allah (God) is thus the ultimate arbiter and qadi (judge) as to who goes to Jahannam (Gehenna) and who is saved.

Note: Tanakh quotes are from the Judaica press Tanach. New Testament quotes from the Bible in this article are from the King James Version.