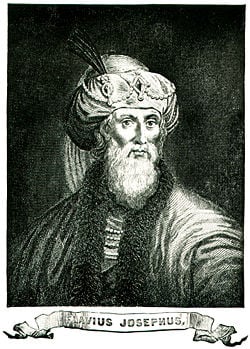 A woodcutting of Flavius Josephus in John C. Winston's translation of his works

Josephus (37 – c. 100 C.E.)[1] who became known in his capacity as a Roman citizen as Flavius Josephus,[2] was a first-century Jewish historian and apologist who survived and recorded the Destruction of Jerusalem in 70 C.E. His works give an important insight into first-century Judaism, describing, for example, the beliefs of some of the main schools, including the Pharisees, Sadducees and the Essenes. Josephus works were some of the most widely read among European scholars. He is also a significant source of information on the period between the two testaments, that is, on the Maccabean revolt, on the Hasmoneans and on the rise of Herod the Great.

While some accuse him of being a pro-Roman propagandist, even a traitor to his nation (for surrendering rather than committing suicide[3] and then cooperating with the Roman aggressors) Josephus nonetheless did much to help to rehabilitate Jews in Roman eyes after the disastrous rebellion of 70 C.E. Being himself a man of priestly and royal ancestry, he earned the respect and patronage of Flavius Vespasian, the future emperor of Rome, an educated man who could appreciate Josephus's counsel about the virtues of Judaism as an enlightened and civilizing religion. Along with Philo, Josephus became a leading apologist for Judaism, helping to secure tolerance and respect for the Jews of the Roman world and enlightening the pagan Romans with the example of Jewish morality.

Josephus, who introduced himself in Greek as "Iosepos (Ιώσηπος), son of Matthias, an ethnic Hebrew, a priest from Jerusalem," fought the Romans in the First Jewish-Roman War of 66-73 C.E. as a Jewish military leader in Galilee. After the Jewish garrison of Yodfat was taken under siege, the Romans invaded, killed thousands, and the remaining survivors who had managed to elude the forces committed suicide. However, in circumstances that are somewhat unclear, Josephus surrendered to the Roman forces invading Galilee in July 67 C.E. He became a prisoner and provided the Romans with intelligence on the ongoing revolt. The Roman forces were led by Flavius Vespasian and his son Titus, both subsequently Roman emperors. In 69 C.E. Josephus was released and according to Josephus' own account, he appears to have played some role as a negotiator with the defenders in the siege of Jerusalem in 70 C.E.

In 71 C.E. he arrived in Rome in the entourage of Titus, becoming a Roman citizen and Flavian client (hence he is often referred to as Flavius Josephus). In addition to Roman citizenship he was granted accommodation in Vespasian's former homeland in conquered Judea, and a decent, if not extravagant, pension. It was while in Rome, and under Flavian patronage, that Josephus wrote all of his known works.

Although he only ever calls himself "Josephus," he appears to have taken the Roman nomen Flavius and praenomen Titus from his patrons.[4] This was standard for new citizens.

Josephus' first wife perished together with his parents in Jerusalem during the siege and Vespasian arranged for him to marry a Jewish girl that was previously captured by the Romans. This girl left Josephus, and around 70 C.E. he married a Jewish woman from Alexandria by whom he had three children (boys). Only one—Flavius Hyrcanus—survived childhood. Later, Josephus divorced his third wife and around 75 C.E. married his fourth wife—another Jewish girl, this time from Crete and from a distinguished family. This last marriage produced two sons, Flavius Justus and Simonides Agrippa.

Josephus' life is beset with ambiguity. For his critics, he never satisfactorily explained his actions during the Jewish war—why he failed to commit suicide in Galilee in 67 C.E. with some of his compatriots, and why, after his capture, he cooperated with the Roman invaders. Hence, some have viewed Josephus as a traitor and informer and questioned his credibility as a historian—dismissing his works as Roman propaganda or as a personal apologetic, aimed at rehabilitating his reputation in history. Most Rabbinical commentators, however, have found him to be an upright Jew.

Nevertheless, he was unquestionably an important apologist in the Roman world for the Jewish people and culture, particularly at a time of conflict and tension. He always remained, in his own eyes, a loyal and law-observant Jew. He went out of his way both to commend Judaism to educated gentiles, and to insist on its compatibility with cultured Greco-Roman thought. He constantly contended for the antiquity of Jewish culture, presenting its people as civilized, devout and philosophical.

Eusebius reports that a statue of Josephus was erected in Rome.[5]

The works of Josephus provide crucial information about the First Jewish-Roman War. They are also important literary source material for understanding the context of the Dead Sea Scrolls and post-Second Temple Judaism. Josephan scholarship in the nineteenth and early twentieth century became focused on Josephus' relationship to the sect of the Pharisees. He was consistently portrayed as a member of the sect, but nevertheless viewed as a villainous traitor to his own nation–a view which became known in Josephan studies as the classical conception. In the mid-twentieth century, this view was challenged by a new generation of scholars who formulated the modern conception of Josephus, still considering him a Pharisee but restoring his reputation in part as patriot and a historian of some standing. Scholarship since 1990 has sought to move scholarly perceptions forward by demonstrating that Josephus was not a Pharisee but an orthodox aristocrat-priest who became part of the Temple establishment as a matter of deference and not willing association[6].

Josephus offers information about individuals, groups, customs and geographical places. His writings provide a significant, extra-biblical account of the post-exilic period of the Maccabees, the Hasmonean dynasty and the rise of Herod the Great. He makes references to the Sadducees, Jewish high priests of the time, Pharisees and Essenes, the Herodian Temple, Quirinius' census and the Zealots, and to such figures as Pontius Pilate, Herod the Great, Agrippa I and Agrippa II, John the Baptist, James, brother of Jesus, and a disputed reference to Jesus.[7] He is an important source for studies of immediate post-Temple Judaism (and, thus, the context of early Christianity).

For many years, the works of Josephus were printed only in an imperfect Latin translation. It was only in 1544 that a version of the Greek text was made available, edited by the Dutch humanist Arnoldus Arlenius. This edition formed the basis of the 1732 English translation by William Whiston which was enormously popular in the English-speaking world. Later editions of the Greek text include that of Benedikt Niese, who made a detailed examination of all the available manuscripts, mainly from France and Spain. This was the version used by H. St. J. Thackeray for the Loeb Classical Library edition widely used today.

His first work in Rome was an account of the Jewish War, addressed to certain "upper barbarians"—usually thought to be the Jewish community in Mesopotamia—in his "paternal tongue" (War I.3), arguably the Western Aramaic language. He then wrote a seven-volume account in Greek known to us as the Jewish War (Latin Bellum Iudaicum). It starts with the period of the Maccabees and concludes with accounts of the fall of Jerusalem, the Roman victory celebrations in Rome, the mopping-up operations, Roman military operations elsewhere in the empire and the uprising in Cyrene. Together with the account in his Life of some of the same events, it also provides the reader with an overview of Josephus' own part in the events since his return to Jerusalem from a brief visit to Rome in the early 60s C.E. (Life 13-17).

Rome cannot have been an easy place for a Jew in the wake of the suppression of the Jewish revolt. Josephus would have witnessed the marches of Titus' triumphant legions leading their Jewish captives, and carrying trophies of despoiled treasure from the Temple in Jerusalem. He would have experienced the popular presentation of the Jews as a bellicose and misanthropic people.

It was against this background that Josephus wrote his War, and although often dismissed as pro-Roman propaganda (perhaps hardly surprising given where his patronage was coming from), he claims to be writing to counter anti-Judean accounts. He disputes the claim that the Jews serve a defeated god and are naturally hostile to Roman civilization. Rather, he blames the Jewish War on what he calls "unrepresentative and over-zealous fanatics" among the Jews, who led the masses away from their natural aristocratic leaders (like him), with disastrous results. He also blames some of the governors of Judea, but these he presents as atypical Romans: corrupt and incompetent administrators. Thus, according to Josephus, the traditional Jew was, should be, and can be, a loyal and peace-loving citizen. Jews can, and historically have, accepted Rome's hegemony precisely because of their faith that God himself gives empires their power.

The next literary work by Josephus is his 21-volume Antiquities of the Jews, completed in the last year of the emperor Flavius Domitian (93 or 94 C.E.). He claims that interested persons have pressed him to give a fuller account of the Jewish culture and constitution. Here, in expounding Jewish history, law and custom, he is entering into many philosophical debates current in Rome at that time. Again he offers an apologia for the antiquity and universal significance of the Jewish people.

Beginning with the story of Creation, he outlines Jewish history. Abraham taught science to the Egyptians, who in turn taught the Greeks. Moses set up a senatorial priestly aristocracy, which like that of Rome resisted monarchy. The great figures of the biblical stories are presented as ideal philosopher-leaders. There is again an autobiographical appendix defending Josephus' own conduct at the end of the war when he cooperated with the Roman forces.

Josephus' Against Apion is a final two-volume defense of Judaism as classical religion and philosophy, stressing its antiquity against what Josephus claimed was the relatively more recent traditions of the Greeks. Some anti-Judean allegations ascribed by Josephus to the Greek writer Apion, and myths accredited to Manetho are also exposed.