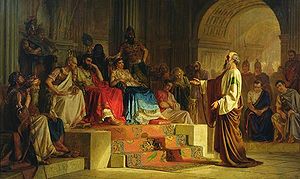 Apostle Paul On Trial by Nikolai Bodarevsky, 1875. Agrippa and Berenice are both seated on thrones as Roman procurator Porcius Festus makes his report.

Agrippa II (b. 27/28 C.E.), was a Roman client king who sided with Rome against his Jewish countrymen during the First Jewish War of 66-73. The son of Agrippa I, he was the seventh and last king of the family of Herod the Great. Agrippa II's full name, like that of his father, was Marcus Julius Agrippa. He is sometimes also called Herod Agrippa II.

Educated in Rome, Agrippa was a thoroughly Hellenistic Jew. After his father died when Agrippa was still a teenager, Emperor Claudius gradually provided him with territorial political responsibilities, including the right to name the important post of high priest of Jerusalem. Agrippa also found favor with Nero, who increased his territories significantly.

In the New Testament, Agrippa II is remembered as the Jewish king who heard the preaching of Saint Paul, after which Agrippa expressed some sympathy for Paul's legal cause. In the meantime, Agrippa had grown increasingly unpopular in Jewish religious circles for his Hellenistic lifestyle, his alleged abuse of his authority in regard to the high priesthood, and his general insensitivity toward to Jewish religious issues. There were also rumors that he was living in an incestuous relationship with his sister Berenice.

As tensions built toward war, Agrippa attempted to convince his fellow Jews not to revolt. In the end, he and his sister Berenice were expelled from Jerusalem and sided with Rome, fighting alongside Vespasian and Titus to put down the rebellion. For his loyal service during this crisis, he was rewarded with the title of praetor. After the revolt ended, he lived as a private citizen in Rome. The date of his death is uncertain, probably around 93-94 in Rome.

Agrippa II was the last in the royal line that began with Herod the Great, the Jewish-Idumean leader who became a major client-king for the Romans and was famous both for his massive building projects and his utter ruthlessness. Agrippa's father, Aprippa I, had been a favorite of both Caligula and Claudius, and eventually came to rule a territory even larger than Herod I's. Agrippa I, unlike Herod, had been widely popular among the Jews, although he was considered an enemy of the Christians.

The younger Agrippa was educated in Rome at the court of Emperor Claudius. At the time of his father's death, he was only 17 years old and not prepared to assume the mantle of leadership. Claudius therefore kept him at Rome and sent Cuspius Fadus as procurator of the Jewish kingdom, which thus again became a Roman province. While at Rome, Agrippa II no doubt witnessed the intrigues and decadent court life which characterized the period, not to mention learning the tragic history of his own violent lineage.

Nevertheless, Agrippa did show some evidence of Jewish patriotism. He voiced his support for the Jewish cause to Claudius over an issue regarding the control of the vestments of the high priest (Josephus, Ant. xv. 11, § 4). He also lobbied on behalf of the Jews during a conflict with the Samaritans during the procuratorship of Ventidius Cumanus, and Claudius ultimately decided in favor of the Jewish side. Several Samaritan leaders were executed for murders committed against Jews in Samaritan territory, and Cumanus was sent into exile.

After the death of Herod of Chalcis in 48, his small Syrian principality was given to Agrippa. However, the appointment carried with it the important right of superintending the Temple in Jerusalem and appointing the high priest. In 53, Claudius appointed Agrippa governor of the much larger tetrarchy formerly belonging to Herod Philip II and Lysanias east of the Galilee. After the promotion Agrippa succeeded in marrying his sister Mariamne to the Gentile prince Gaius Julius Archelaus Antiochus Epiphanes. Around the same time he arranged for the marriage of his sister Drusilla to Gaius Julius Azizus, King of Emesa. Drusila's husband was circumcised as a condition of his marriages, but when Mariamne's husband balked at this condition, that marriage was canceled. Agrippa's insistence on his sisters' husband adopting the central sign of the Jewish covenant with God shows that in this matter, if not in others, he identified strongly with Jewish tradition. Agrippa's third sister, Berenice, now joined Agrippa as his companion, being the widow of Herod of Chalcis, who had been her third husband.

Agrippa maintained his good standing with the Romans under Nero, who added important new territories to Agrippa's jurisdiction between 53 and 61, including the cities of Tiberias and Taricheae in Galilee, and Julias, with 14 suburban villages nearby, in Peraea. Agrippa expended large sums in beautifying Cæsarea Philippi (which he renamed Neronias), Jerusalem, and other cities, especially Berytus (modern Beirut) in today's Lebanon.

Around 59, Agrippa and Berenice heard the case of the Apostle Paul at Caesarea Maritima, where the current Roman procurator, Porcius Festus, had attempted to induce Paul to return to Jerusalem for trial, but Paul insisted on his rights as a Roman citizen to be heard in Caesar's court. The scene is recorded in considerable detail in Acts 25-26. Paul appeals to Agrippa as being well acquainted with Jewish affairs. Paul explains that he is of the party of the Pharisees and a believer in the resurrection of the dead, which his accusers, the Sadducees, deny. Paul goes on to testify to Agrippa about his conversion experience and his belief that Jesus, the Messiah, fulfilled the prophetic doctrine of the resurrection. Agrippa's famous response in Acts 26:28 is a subject of much debate, translated in the King James Version as, "Almost thou persuadest me to be a Christian." Modern renditions translate the same passage as "Do you think that in such a short time you can persuade me to be a Christian?" (NIV) More clear is Agrippa's comment to Festus after Paul leaves, indicating that the apostle had made a serious tactical error by appealing to Rome: "This man could have been set free if he had not appealed to Caesar." The point seems to be that Agrippa agreed with Festus that Paul had done nothing worthy of death and would have exonerated Paul if it had been left up to him. Paul went on to Rome where he was martyred.

Coin of Agrippa II showing Vespasian on one side and the goddess Tyche on the other.

Agrippa's partiality to Hellenistic culture rendered him unpopular among his more religious Jewish subjects. There were even rumors that his exposure to Roman custom had corrupted him to such a degree that he had established an incestuous relationship with his sister Berenice. He also offended Jews by issuing coins that showed no consideration to their religious scruples. In contrast to the coins of some earlier Jewish rulers of the Roman period, most of his coins bear the images of the reigning emperor or of pagan emblems. Worse still, he was felt to have abused the right to appoint and remove the high priests, with whom he often quarreled, resulting in his deposing them. In a related episode, Agrippa heightened the watchtower to the Herodian palace in Jerusalem, enabling him to see into the Temple courts. The priests, in defiance, raised the Temple wall.

Underlying this game, a deadly serious struggle was brewing, as anti-Roman sentiment had reached the boiling point in Jerusalem. Among the Pharisees, the strict faction of the House of Shammai gained the advantage over the more liberal House of Hillel and began to coalesce with the party of Zealots. Now, even some of the Sadducean priests had been brought into the anti-Roman camp.

Siding with Rome against the Jews

In 64 Emperor Nero appointed Gessius Florus as procurator of the Judaea Province. Tensions quickly rose to civil unrest when Florus plundered the treasury of the Temple of Jerusalem under the guise of imperial taxes. Riots quickly followed, and the instigators were crucified by the Romans. Berenice was so appalled by this that she traveled to Jerusalem in 66 to petition Florus to spare the Jews, but to no avail. 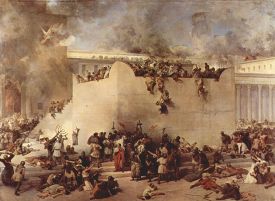 The destruction of the Temple of Jerusalem by Titus in 70 C.E.

In an attempt to prevent violence from further escalating, Agrippa assembled the populace and delivered a tearful speech to the crowd with Berenice by his side. In an oration preserved by Josephus, he employed substantial eloquence to warn the inflamed leaders against extremes, and counseled a return to calmness and deliberation (Josephus, Wars of the Jews ii. 16, §§ 4, 5). Things by this time had reached the point of no return, however, as the insurgents burned down the Herods' palaces. Agrippa and Berenice barely fled with their lives to Galilee and joined the Roman cause. It was during this period that Berenice met and fell in love with Titus, who was ten years her junior.

During the revolt, Agrippa proved his worth to Rome by sending 2,000 foot soldiers, archers, and cavalry to support the Roman general Vespasian in putting down the rebellion. After the capture of the fortified village of Jotapata in the Galilee, he is reported to have invited Vespasian and his army to his capital to celebrate the occasion. He then joined the conquerors in their victorious march onward. After Vespasian was made emperor in 69, Agrippa accompanied Vespasian's son Titus on some campaigns and was wounded at the siege of Gamala in the Golan Heights. After the capture of Jerusalem, he went with his sister to Rome. There, his loyalty was rewarded as he was invested with the dignity of praetor and given additional territory.

According to the much later writings of Photius, Agrippa died, childless, at the age of 70, in the third year of the reign of Trajan, that is, 100. However, contemporary documents and statements of Josephus cast this date into doubt. The modern consensus holds that he died before 93/94. He was the last prince of the house of the Herods.

Agrippa's story brings to a close the saga of the Herodian dynasty begun by his infamous great-grandfather Herod the Great. He is seen in Jewish history as one of the worst of the Herods, the ruler whose Hellenistic ways and policies of pleasing the Romans were so intolerable as to precipitate the disastrous Jewish Revolt of 66 C.E., which resulted in the destruction of the Temple of Jerusalem and the temporary end of Jewish hopes for the restoration of national sovereignty. In Christian tradition, Agrippa appears as a somewhat sympathetic hearer of the Christian message who may have acquitted the Apostle Paul if the matter had been left up to him.

In his later life, Agrippa lived on terms of intimacy with the historian Josephus, who had opposed him and his Roman superiors as a commander of Jewish forces in the Galilee. Agrippa supplied Josephus with information for his histories and Josephus preserved two of the letters he received from Agrippa as well as substantial details of his activities.[1]