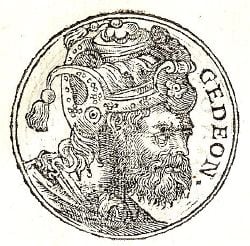 Gideon (Hebrew: גִּדְעוֹן, Gidʻon), also known as Jerubbaal, was a judge appearing in the biblical Book of Judges. He was the son of Joash, from the clan of Abiezer in the tribe of Manasseh, and the father at least 71 sons. He lived probably in the twelth century B.C.E. The name Gideon means "Destroyer," "Mighty warrior," or possibly "Feller (of trees)."

Gideon was one of the more significant judges whose story is recorded in the Bible (Judges chapters 6 to 8) in some detail. The narrative portrays not only his military exploits, but also his sometimes cantankerous relationship with God. He won a dramatic victory over the Midianites and restored the Jordan River valley to Israelite rule. His influence, unlike that of some other judges, appears to have extended to several other tribes, especially Ephraim and Napthali. A ruthless war leader, he severely punished not only Israel's enemies, but also two Israelite towns that failed to support his armies. Although he reportedly refused a king's crown when it was offered to him, he is criticized in the Bible for having made a golden ephod (a breast plate used for divination) which became an object of idolatry. His legacy is a particularly tragic one, as his son Abimelech would go on to assume the kingship briefly after killing all but one of his brothers.

Biblical scholars have identified a number of thorny issues in Gideon narratives (see Critical views, below.)

The story of Gideon begins with a prologue detailing the oppression of the Israelites by the Midianites. So strong was the Midianite pressure on the Israelite tribes that the latter were forced to live in caves and watch helplessly as their crops and cattle were destroyed. An unnamed prophet appears who explains that the Israelites' troubles are due to their abandoning Yahweh in favor of the Amorite gods.

Gideon was the son of a man called Joash the Abiezrite, of the tribe of Manasseh, in the town of Ophrah. The family, like many Israelites of the time, maintained an altar devoted to the Canaanite deity Baal, while also believing in the Hebrew God Yahweh.

An angel comes to Gideon while he is threshing wheat in a wine press, an action made necessary by Midianite domination. "Yahweh is with you, mighty warrior!" the angel declares. Gideon, an unlikely champion, doubts both his calling and God's power, saying: "If the Lord is with us, why has all this happened to us? Where are all his wonders that our fathers told us about?" (Judges 6:13) When the angel persists and commands him to save Israel from the Midianite power, Gideon protests: "How can I save Israel? My clan is the weakest in Manasseh, and I am the least in my family."

The angel reassures Gideon, who responds at last by offering a sacrifice and building an altar, which reportedly remained a place of religious significance until at least the time when the Book of Judges was compiled. On God's further instruction, Gideon destroys the clan's altar to Baal and replaces it with a "proper" altar devoted to Yahweh. Threatened with death for his crime, Gideon is protected by his father, who insists that Baal himself, not mere men, should be the one to execute judgment on his son.

Gideon then sends messengers to gather men from the tribes of Asher, Zebulun, and Naphtali, as well as his own tribe of Manasseh in order to meet an armed force of Midianites and the Amalekites that had crossed the Jordan River and have encamped in the Valley of Jezreel.

Still uncertain of his calling, Gideon then tests God by asking him, on successive nights, to cause a woolen fleece to be wet, then dry. God obliging complies. The episode is the origin of the saying "laying the fleece before the Lord" to signify asking God for a confirming sign. (Judges 6:36-40)

The tribes respond to Gideon's call and assemble at Mount Gilead, but God instructs Gideon that the troops are too numerous. God is concerned that He get the primary credit for the victory. He instructs Gideon to send home those men who "tremble with fear." The Bible reports that 22,000 men return home while 10,000 remain.

This number is still too great in God's view. He separates the remaining men by having Gideon observe how the men drink water from a stream. Gideon is to retain only those who drink directly from the stream rather than scooping the water up with their hands. In the end a force of only 300 remains.

Victory and its aftermath

With a huge Midianite army encamped in the nearby valley, Gideon gives each of his men a trumpet, a torch, and a clay jar. They quietly surround the enemy camp, with their torches hidden inside their jars. At Gideon's signal, every man blows his trumpet and breaks his jar. The surprised Midianites are thrown into a panic, turning on one another. The confused survivors flee for their lives. The previously dismissed forces of Naphtali and Manasseh pursue them. Ephraim intercepts their flight at the Jordan. Two chiefs, Oreb and Zeeb, are captured and put to death, their heads being brought to Gideon (Judges 7:21-26).

The Ephraimites, however, are offended for not having been included in the initial battle. Gideon allays their anger and renews the pursuit of Midian across the Jordan. Refused food by the men of Succoth and Peniel, he presses on, promising vengeance. Finally overtaking the Midianites, he takes two kings prisoners. Returning homeward, he takes vengeance on the men of Succoth, and destroys Peniel, slaying its inhabitants. He then executes the captured kings Zebah and Zalmunna.

With the Midianites vanquished, a movement arises to make Gideon king, but he refuses, saying that God alone should rule. However, he orders that an "ephod" be made for him out of the gold plundered in battle. The biblical writers inform us that this later become an object of idolatry.

Gideon lived to a ripe old age and was buried in his home town of Ophrah. A period of 40 years of peace reportedly followed Gideon's victory over the Midianites. Although he declined the honor of kingship, he seems to have lived in royal fashion, fathering 70 sons with "many wives."

It was a son by concubine, however, who became the most famous. Abimelech ("my father is king") of Shechem rose to power by killing all of his brothers and ruling for three years as king himself.

The critical school considers the story of Gideon to be a composite narrative, drawn from three main sources: the Yahwist ("J"), the Elohist ("E"), and the Deuteronomic ("D") writers. Later interpolations and editorial comments have also been pointed out. The account of Gideon's war against Midian may be an expression of his particular tribe's struggle against hostile Bedouin clans across the Jordan. Also evident are recollections of bitter tribal animosities between Manasseh, Ephraim and other proto-Israelite tribes.

Gideon's alternate name, "Jerubbaal," is a theophorous name in which "Baal" seems once to have been harmonious or synonymous with "Yahweh." The story (Judges 5:29-32) that the name actually means "Let Baal contend" is designed by later writers to explain away this inconvenient fact. The composite nature of the Gideon narrative is apparent not only from the two names "Gideon" and "Jerubbaal," but also from several repetitions in the narrative: two encounters with the Angel of God, two layings of the fleece before the Lord, two sacrifices made by Gideon, two altars erected, two sets of similarly-named Midianite chiefs executed, etc.

Gideon's son, the short-lived King Abimelech, whose name means "father is king," may have seen himself as continuing his father's royal lineage, which has been downgraded to that of a judge in the biblical record just as Abimelech himself has been removed from the list of judges. The stories of Gideon's ruthlessness toward his enemies (both Midianite and Israelite)—together with his golden ephod, his many wives, and his 70 sons—presents a picture of a man who perhaps "would not be king," but would certainly be a wealthy and powerful chieftain. Compared to other judges, Gideon appears to have been quite successful, and perhaps even a little too much so.

Retrieved from https://www.newworldencyclopedia.org/p/index.php?title=Gideon&oldid=1057217
Categories:
Hidden category:
This page was last edited on 28 August 2021, at 22:57.
Content is available under Creative Commons Attribution/Share-Alike License; additional terms may apply. See Terms of Use for details.