The Longmen Grottoes (ch. 龍門石窟/ 龙门石窟, lóngmén shíkū; lit. Dragon's Gate Grottoes) or Longmen Caves are located 12 kilometers (7.5 mi) south of present day Luoyang in Henan province, China. The grottoes, depicting Buddhist subjects, densely dot two mountains: Xiangshan (to the east) and Longmenshan (to the west). The Yi River flows northward between them. For that reason, the area had been called Yique (The Gate of the Yi River). From north to south, the distance covered by grottoes is about one kilometer. Along with the Mogao Caves and Yungang Grottoes, the Longmen Grottoes is one of the three most famous ancient sculptural sites in China.

The construction of the Longmen Grottoes began in 493 C.E. and continued construction into the last dynasty, the Qing (1644–1912). More than 2,000 caves, nearly 3,000 inscriptions, more than forty pagodas and 100,000 images were created during the Tang dynasty (618–907) with the majority of the remainder created earlier during the Northern Wei Dynasty (386-535). The Longmen Grottoes reveal the profound impact that Buddhism has had in the eastern part of China. UNESCO designated Longmen Grottoes a World Heritage Site in 2000. The area was inscribed on the UNESCO World Heritage List in November 2000.

Mt. Longmen as seen from Manshui Bridge to the southeast.

Longmen Caves has 2345 caves and niches, 2800 inscriptions, forty three pagodas, and over 100,000 Buddhist images.[1] Thirty percent of the caves date from the Northern Wei Dynasty, sixty percent from the Tang Dynasty, and caves from other periods less than ten percent. The most impressive collection of Chinese art from those dynasties, dating from 316 to 907 C.E. They represent the zenith of stone carving in China.

During the Warring States Period, the general Bai Qi of Qin (state) once defeated the allied forces of Han (state) and Wei (state) at the site.[2] Construction of the grottoes began in 493 C.E. According to UNESCO's citation designating the Longmen Grottoes a World Heritage Site, they are an illustration of "…the perfection of a long-established art form which was to play a highly significant role in the cultural evolution of this region of Asia."[3] 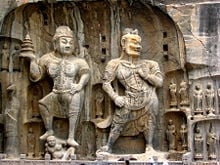 Massive Boddhisatvas in the main grotto.

Middle Binyang Cave (ch. 宾阳中洞) is cave number 140, 12 meters long, 10.9 meters wide, 9.3 meters high. Constructed by order of Emperor Xuanwu of the Northern Wei in honor of his parents Emperor Xiaowen and Empress Wenzhao, the cave was supposed to imitate Lingyansi Cave at the Yungang Caves.[4] Work began in 500 and was completed in 523. In 1987, a brick-entrance was demolished to reveal two new figures: A four-headed, four-armed Brahma and a one headed, four armed Śakra devendra.

The back wall is a carved Sakyamuni, with two discliples and two bodhisattvas. The main Buddha and Bodhisattva represent the Northern Wei sculptural style. A lotus-flower pool decorates the floor. The ceiling is engraved with a blossoming lotus flower, eight musical apsarases, two attending apsarases and tassel and drapery patterns. A large Vimalakirti relief, the Prince Sattva jataka, the Prince Sudatta jataka, an emperor/empress worshiping scene and ten deity kings cover the front wall. North and South Binyang Caves flank the cave. South Binyang Cave (ch. 宾阳南洞) is cave number 159 at the Longmen Grottoes. Emperor Xuanwu of the Northern Wei also ordered the construction of this cave in honor of his parents Emperor Xiaowen and Empress Wenzhao at the same time as the North Binyang Cave. The cave was finally completed during the Sui.[5]

The main image is an Amitabha, said to represent the transition of solemn and majestic Northern Wei sculpture into the more life-like style of the Tang. Numerous sculptures have been carved into the cave walls including Bodhisattvas. Middle Binyang Cave and North Binyang Cave are adjacent to the north. 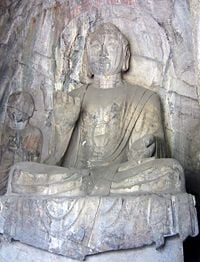 The Hidden Stream Temple Cave (ch. 潜溪寺洞; qián xī sì dòng, also zhai fu tang) is cave number 20. The cave had wooden structured eaves added during the Qing Dynasty, but they deteriorated with time and have not been replaced. In 1990, an outer room imitating the Tang style was rebuilt and the floor paved with bricks.

The central statue is a large Amitabha seated on a square pedestal with loose clothes, a naked chest, and a plump face. His hands take the abhaya mudra, symbolizing fearlessness. The Bodhisattvas Avalokitesvara and Mahasthamaprapta stand to each side. Two armored heavenly kings protect the entrance. Two engraved buddhas in a niche on the southern wall outside the cave stand at the entrance. 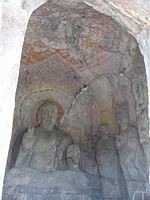 North Binyang Cave interior. The rear and north walls are visible. (May, 2004).

The Longmen area is open to the public, and although the grottoes cannot be entered most of the artwork can be seen from the exterior.

Retrieved from https://www.newworldencyclopedia.org/p/index.php?title=Longmen_Grottoes&oldid=1085429
Categories:
Hidden category:
This page was last edited on 4 November 2022, at 02:38.
Content is available under Creative Commons Attribution/Share-Alike License; additional terms may apply. See Terms of Use for details.