Halhūn be jailara gurung) or Ligong (Chinese: 离宫; pinyin: Lígōng, the Qing Dynasty's summer palace), situated in the city of Chengde in Hebei Province, China, is the world's largest existing imperial garden. Chengde largely survived the ravages of the Cultural Revolution, its buildings enjoy an excellent state of preservation. UNESCO listed the Mountain Resort, along with outlying temples, a World Heritage Site in December 1994.

Master craftsmen built the Mountain Resort between 1703 and 1792. Covering a total area of 5.6 square kilometers (2.2 sq mi), almost half of Chengde's urban area, a vast complex of palaces and administrative and ceremonial buildings make up the resort. Temples of various architectural styles and imperial gardens blend harmoniously into a landscape of lakes, pasture land and forests. In addition to its aesthetic beauty, the Mountain Resort represents a rare historic vestige of the final development of feudal society in China.

The Kangxi, Qianlong, and Jiaqing Emperors, spent several months each year at the resort to escape the summer heat in the capital city of Beijing. The palace zone is designed in the southern part of the resort to resemble the Forbidden City in Beijing. It consists of two parts: A courtyard in front, where the emperor received high officials, nobles of various minority nationalities, and foreign envoys; and bed chambers in the rear, serving as the imperial family's living quarters. The Mountain Resort typically has temperatures at least three degrees Celsius cooler than Chengde City itself. 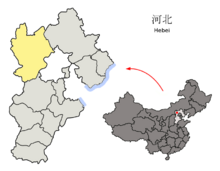 The Mountain Resort earned renown for the seventy two scenic spots named by the Kangxi and Qianlong Emperors. Many of the scenic spots around the resort lake area had been modeled after from famous landscaped gardens in Southern China. For instance, the main building on Green Lotus Island, "Tower of Mist and Rain," (Chinese: 烟雨楼; pinyin: Yānyǔ Lóu) imitated a tower in Nanhu Lake at Jiaxing in Zhejiang Province. The resort plain area resembles the scenery of the Mongolian grasslands. Buildings in a variety of architectural styles dot the forested mountains and valleys, including a seventy meter tall stone Chinese pagoda built in the year 1751 during the reign of the Qianlong Emperor. The pagoda, shaped with an octagonal base, has nine stories decorated with colorful glazed tiles with the steeple crowned by a gilded round spire. 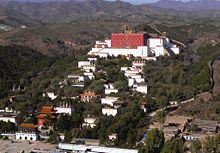 The Putuo Zongcheng Temple of Chengde, built in the eighteenth century during the reign of the Qianlong Emperor. 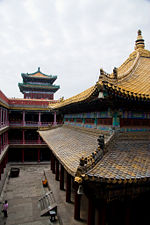 View within the Cihangpudu building, the main hall of the temple, crowned with Chinese pavilions and centered around a hall with a golden rooftop.

The Putuo Zongcheng Temple (Chinese: 普陀宗乘之庙; pinyin: Pǔtuó Zōngchéng) is a Qing Dynasty era Buddhist temple complex built between 1767 C.E. and 1771,[1] during the reign of the Qianlong Emperor (1735-1796). Located near the Chengde Mountain Resort, it numbers among the Eight Outer Temples of Chengde, along with the equally famed Puning Temple. The temple had been modeled after the Potala Palace in Tibet, the old sanctuary of the Dalai Lama built a century earlier.[1][2] Hence, the Putuo Zongcheng has been nicknamed the "Little Potala Palace." The temple represents a fusion of Chinese and Tibetan architectural styles, covering 220,000 square meters, making it one of the largest in China. Many of its halls and pavilions have copper and gold tiled roofs, adding to the splendor of the site.

The Putuo Zongcheng Temple numbers among the "Eight Outer Temples" located in Chengde, part of the World Heritage site along with Chengde's Mountain Resort. The "Lifan Yuan," an administrative department for the affairs of ethnic minorities such as the Mongolians and Tibetans, constructed the temples infusing combinations of architectural style throughout the Eight Outer Temples in Chengde.

The Putuo Zongcheng Temple, originally dedicated to the Qianlong Emperor to commemorate his birthday, gave Hebei a temple of equal size and splendor as the Tibetan Potala Palace. The Putuo Zongcheng temple, serving Buddhist ceremonies and festivals, also acted as the meeting place between the emperor and ethnic envoys from throughout the empire. The location served as a peaceful getaway in contrast to the bustling life of the capital Beijing, as well as complimented the nearby hunting grounds that the emperor would enjoy with his hosts. 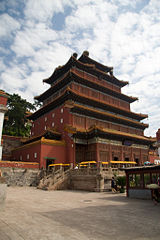 The Puning Temple (普宁寺), or Temple of Universal Peace (commonly called the Big Buddha Temple)[3] is a Qing Dynasty era Buddhist temple complex built during the reign of the Qianlong Emperor (1735-1796 C.E.). He constructed the temple to show the Qing's respect to the ethnic minorities. Located near the Chengde Mountain Resort, alongside the Putuo Zongcheng Temple, it numbers among the "Eight Outer Temples" of Chengde. Much as the Putuo Zongcheng Temple had been modeled after the Tibetan Potala Palace, the Puning Temple had been modeled after the Samye Monastery, the sacred Lamaist site in Tibet.

The front temple had been constructed in the Chinese style, with the temple complex overall follows both Chinese and Tibetan architectural styles. The Puning Temple also houses the world's tallest wooden sculpture of the Bodhisattva Avalokiteśvara (22.28-meter-high and 110-ton),[4] hence the Puning Temple has become known as the "Big Buddha Temple." The complex features temple halls, pavilions, drum towers and bell towers. Since the seventeenth century, during the late Chinese Ming Dynasty, the Dzungar people of northwestern China (modern Xinjiang) engaged in warfare with other nomadic horse-archer groups in the region. The later Qianlong Emperor dispatched an army to Yili to suppress their resistance against the Qing Dynasty. The Chinese attacked Kulja (Yining) and captured the ruling Dzungar khan.

After the conquest, Emperor Qianlong personally inscribed a stele in 1755 located in a pavilion of the Puning Temple. That stele, the Puning Sibei, commemorated the founding of the temple and the conquering of the Dzungars.[5] Qianlong ordered the building of the Temple of Universal Peace, a symbol of the emperor's intention to foster peaceful relations among the many ethnic minorities in China and to good government the northwestern regions. The historian Waley-Cohen calls Chengde "a crucial location for the exhibition of Manchu power and the representation of Qing imperial knowledge," being the location of the summer capital.[5] Since the Dzungar practiced Lamaism, the emperor built the temple in imitation of Samye monastery, the sacred place of Lamaism in Tibet.

The large wooden Buddhist statue of the Bodhisattva Avalokiteśvara within the main hall of the Puning Temple represents one of its most renowned features. It shows a thousand different eyes and a thousand different arms stretched out from its frame (in various sizes). The statue has been made with five types of wood, including pine, cypress, elm, fir, and linden.

Retrieved from https://www.newworldencyclopedia.org/p/index.php?title=Chengde_Mountain_Resort&oldid=1003194
Categories:
Hidden category:
This page was last edited on 9 February 2017, at 19:26.
Content is available under Creative Commons Attribution/Share-Alike License; additional terms may apply. See Terms of Use for details.