The Temple of Heaven, literally the Altar of Heaven (Traditional Chinese: 天壇; Simplified Chinese: 天坛; pinyin: Tiāntán; Manchu: Abkai mukdehun) is a complex of Taoist buildings situated in southeastern urban Beijing, in Xuanwu District. Emperor Yongle, who also commissioned the building of the Forbidden City in Beijing, constructed the temple complex between 1406 and 1420. Since that time the Emperors of the Ming and Qing dynasties visited the complex for annual ceremonies of prayer to Heaven for good harvest. Even as late as 1914, Yuan Shih-kai performed a ceremony seeking to become Emperor of China.

The Temple of Heaven, a Taoist temple, covers nearly three km² and hosts three main structures: The Hall of Prayer for Good Harvests (祈年殿), The Imperial Vault of Heaven (皇穹宇), The Circular Mound Altar (圜丘坛). The Emperor of China, regarded as the Son of Heaven by his subjects, twice a year lead sacrificial prayers especially for good harvests from the temples. The temple complex consisted of a square and a circle, symbolizing the connection between Earth and Heaven. The Emperor, as the Son of Heaven, served as the mediator between Heaven and Earth on the behalf of the Chinese empire, especially responsible for ensuring a bountiful harvest season. UNESCO designated Temple of Heaven: An Imperial Sacrificial Altar in Beijing a World Heritage Site in 1998. 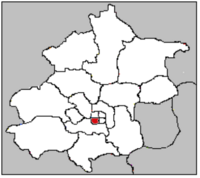 The temple complex was constructed from 1406 to 1420, during the reign of the Yongle Emperor, also responsible for the construction of the Forbidden City in Beijing. The complex was extended and renamed Temple of Heaven during the reign of the Jiajing Emperor in the sixteenth century.[1] The Jiajing Emperor also built three other prominent temples in Beijing: the Temple of Sun in the east (日坛), the Temple of Earth in the north (地坛), and the Temple of Moon in the west (月坛). The Temple of Heaven was renovated in the eighteenth century under the Qianlong Emperor. In 1914, Yuan Shih-kai, then President of the Republic of China, performed a Ming prayer ceremony at the temple, as part of an effort to have himself declared Emperor of China.

A masterpiece of architecture and landscape design which simply and graphically illustrates a cosmogony of great importance for the evolution of one of the world’s great civilizations…" as the "symbolic layout and design of the Temple of Heaven had a profound influence on architecture and planning in the Far East over many centuries.[2]

According to the Xinhua News Agency, in early 2005, the Temple of Heaven underwent a 47 million yuan (5.9 million USD) restoration in preparation for the 2008 Beijing Summer Olympics, the restoration was completed on May 1st, 2006.[3] It is a very popular park for exercising, and particularly for practicing taiji bailong ball, which is a paddleball variation of Tai Chi. Developed by Chinese Olympic boxing coach Bai Rong, taiji bailong ball is known as Rythmball in North America. [4]

Panorama with the Hall of Prayer for Good Harvests in the center, viewed from the South

The Temple grounds covers 2.73 km² of parkland,[5] and comprises three main buildings, all constructed in accord with Daoist philosophy:

Panorama of the three main halls

In ancient China, the Chinese people regarded the Emperor of China the Son of Heaven. They believed that he administered earthly matters on behalf of, and representing, heavenly authority. Showing respect to the source of his authority, in the form of sacrifices to heaven, was extremely important. The temple was built for those ceremonial prayers, mostly consisting of prayers for good harvests.

Twice a year the Emperor and all his retinue moved from the Forbidden city through Beijing to encamp within the complex, wearing special robes and abstaining from eating meat.[9] Only Chinese royalty and nobility were allowed to view that procession or the ceremony following. In the temple complex the Emperor personally prayed to Heaven for good harvests. the Emperor performed the highpoint of the ceremony at the winter solstice on the Earthly Mount. The ceremony had to be perfectly completed; it was widely held that the smallest of mistakes would constitute a bad omen for the whole nation in the coming year. 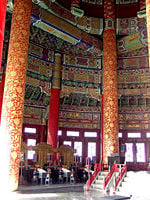 Inside the Hall of Prayer for Good Harvests

A square represented Earth and a circle Heaven; several features of the temple complex symbolize the connection of Heaven and Earth, of circle and square. Two cordons of walls surround the whole temple complex; the outer wall has a taller, semi-circular northern end, representing Heaven, and a shorter, rectangular southern end, representing the Earth. Both the Hall of Prayer for Good Harvests and the Circular Mound Altar are round, each standing on in square courtyard, again representing Heaven and Earth.

The number nine represents the Emperor, evident in the design of the Circular Mound Altar: A ring of nine plates surrounds a single round marmor plate, then a ring of eighteen plates, and so on for a total of nine surrounding rings, the outermost having nine×nine plates. The Hall of Prayer for Good Harvests has four inner, twelve middle and twelve outer pillars, representing the four seasons, twelve months and twelve traditional Chinese hours respectively. All the buildings within the Temple have special dark blue roof tiles, representing the Heaven. The Seven-Star Stone Group, east of the Hall of Prayer for Good Harvest, represents the seven peaks of Taishan Mountain, a place of Heaven worship in classical China.

Retrieved from https://www.newworldencyclopedia.org/p/index.php?title=Temple_of_Heaven&oldid=1031074
Categories:
Hidden category:
This page was last edited on 21 January 2020, at 19:04.
Content is available under Creative Commons Attribution/Share-Alike License; additional terms may apply. See Terms of Use for details.