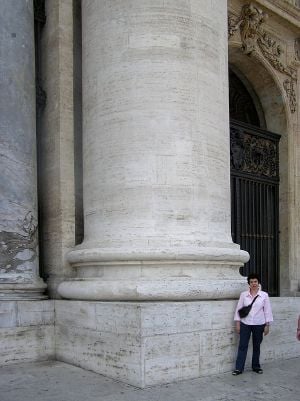 One of the eight main columns of Saint Peter's Basilica facade, Vatican City. 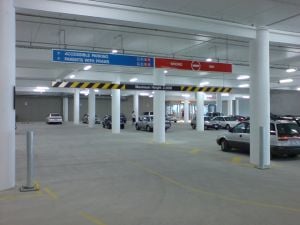 Columns are frequently used to support beams or arches on which the upper parts of walls or ceilings rest. In architecture, column refers to such a structural element that also has certain proportional and decorative features. A column might not support any major structure but be a decorative or triumphant feature with, for instance, a statue on top.

In the architecture of ancient Egypt, as early as 2600 B.C.E., the architect Imhotep made use of stone columns whose surface was carved to reflect the organic form of bundled reeds; in later Egyptian architecture faceted cylinders were also common.

Some of the most elaborate columns in the ancient world were those of Persia especially the massive stone columns erected in Persepolis. They included double-bull structures in their capitals. The Hall of Hundred Columns at Persepolis, measuring 70 × 70 meters was built by the Achaemenid king Darius I (524–486 B.C.E.). Many of the ancient Persian columns are standing, some being more than 30 meters tall.

The impost (or pier) is the topmost member of a column. The bottom-most part of the arch, called the springing, rests on the impost.

Early columns were constructed of stone, some out of a single piece of stone, usually by turning on a lathe-like apparatus. Single-piece columns are among the heaviest stones used in architecture. Other stone columns are created out of multiple sections of stone, mortared or dry-fit together. In many classical sites, sectioned columns were carved with a center hole or depression so that they could be pegged together, using stone or metal pins. The design of most classical columns incorporates entasis (the inclusion of a slight outward curve in the sides) plus a reduction in diameter along the height of the column, so that the top is as little as 83 percent of the bottom diameter. This reduction mimics the parallax effects which the eye expects to see, and tends to make columns look taller and straighter than they are while entasis adds to that effect.

Modern columns are constructed out of steel, poured or precast concrete, or brick. They may then be clad in an architectural covering (or veneer), or left bare. 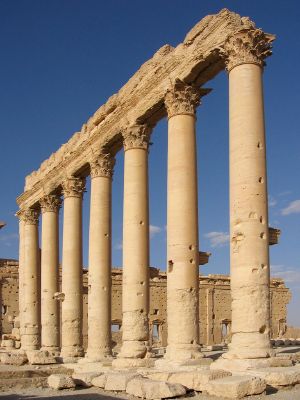 These are composed of stacked segments and finished in the Corinthian style (Temple of Bel, Syria)

For an axially loaded straight column with any end support conditions, the equation of static equilibrium, in the form of a differential equation, can be solved for the deflected shape and critical load of the column. With hinged, fixed or free end support conditions the deflected shape in neutral equilibrium of an initially straight column with uniform cross section throughout its length always follows a partial or composite sinusoidal curve shape, and the critical load is given by

where E = modulus of elasticity of the material, Imin = the minimal moment of inertia of the cross section, and L = actual length of the column between its two end supports. A variant of (1) is given by 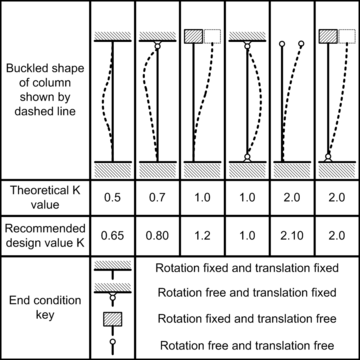 where r = radius of gyration of [column]cross-section which is equal to the square root of (I/A), K = ratio of the longest half sine wave to the actual column length, and KL = effective length (length of an equivalent hinged-hinged column). From Equation (2) it can be noted that the buckling strength of a column is inversely proportional to the square of its length.

When the critical stress, Fcr (Fcr =Pcr/A, where A = cross-sectional area of the column), is greater than the proportional limit of the material, the column is experiencing inelastic buckling. Since at this stress the slope of the material's stress-strain curve, Et (called the tangent modulus), is smaller than that below the proportional limit, the critical load at inelastic buckling is reduced. More complex formulas and procedures apply for such cases, but in its simplest form the critical buckling load formula is given as Equation (3),

where Et = tangent modulus at the stress Fcr

A column with a cross section that lacks symmetry may suffer torsional buckling (sudden twisting) before, or in combination with, lateral buckling. The presence of the twisting deformations renders both theoretical analyses and practical designs rather complex.

Eccentricity of the load, or imperfections such as initial crookedness, decreases column strength. If the axial load on the column is not concentric, that is, its line of action is not precisely coincident with the centroidal axis of the column, the column is characterized as eccentrically loaded. The eccentricity of the load, or an initial curvature, subjects the column to immediate bending. The increased stresses due to the combined axial-plus-flexural stresses result in a reduced load-carrying ability.

When a column is too long to be built or transported in one piece, it has to be extended or spliced at the construction site. A reinforced concrete column is extended by having the steel reinforcing bars protrude a few inches or feet above the top of the concrete, then placing the next level of reinforcing bars to overlap, and pouring the concrete of the next level. A steel column is extended by welding or bolting splice plates on the flanges and webs or walls of the columns to provide a few inches or feet of load transfer from the upper to the lower column section. A timber column is usually extended by the use of a steel tube or wrapped-around sheet-metal plate bolted onto the two connecting timber sections

A column that carries the load down to a foundation must have means to transfer the load without overstressing the foundation material. Reinforced concrete and masonry columns are generally built directly on top of concrete foundations. A steel column, when seated on a concrete foundation, must have a base plate to spread the load over a larger area and thereby reduce the bearing pressure. The base plate is a thick rectangular steel plate usually welded to the bottom end of the column. 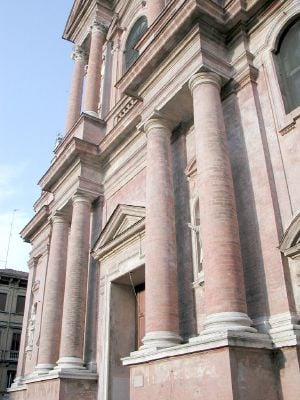 The Roman author Vitruvius, relying on the writings (now lost) of Greek authors, tells us that the ancient Greeks believed that their Doric order developed from techniques for building in wood in which the earlier smoothed tree trunk was replaced by a stone cylinder.

The Doric order is the oldest and simplest of the classical orders. It is composed of a vertical cylinder that is wider at the bottom. It generally has neither a base nor a detailed capital. It is instead often topped with an inverted frustum of a shallow cone or a cylindrical band of carvings. It is often referred to as the masculine order because it is represented in the bottom level of the Colosseum and the Parthenon, and was therefore considered to be able to hold more weight. The height-to-thickness ratio is about 8:1. The shaft of a Doric Column is always fluted.

The Greek Doric, developed in the western Dorian region of Greece, is the heaviest and most massive of the orders. It rises from the stylobate without any base; it is from four to six times as tall as its diameter; it has twenty broad flutes; the capital consists simply of a banded necking swelling out into a smooth echinus, which carries a flat square abacus; the Doric entablature is also the heaviest, being about one-fourth the height column. The Greek Doric order was not used after c. 100 B.C.E. until its “rediscovery” in the mid-eighteenth century.

The Tuscan order, also known as Roman Doric, is also a simple design, the base and capital both being series of cylindrical disks of alternating diameter. The shaft is almost never fluted. The proportions vary, but are generally similar to Doric columns. Height to width ratio is about 7:1.

The Ionic column is considerably more complex than the Doric or Tuscan. It usually has a base and the shaft is often fluted (it has grooves carved up its length). On the top is a capital in the characteristic shape of a scroll, called a volute, or scroll, at the four corners. The height-to-thickness ratio is around 9:1. Due to the more refined proportions and scroll capitals, the Ionic column is sometimes associated with academic buildings. 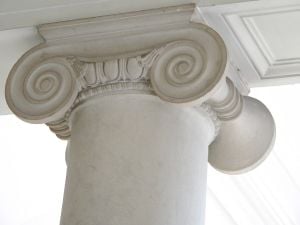 The Corinthian order is named for the Greek city-state of Corinth, to which it was connected in the period. However, according to the Greek architectural historian Vitruvius, the column was created by the sculptor Callimachus, probably an Athenian, who drew acanthus leaves growing around a votive basket. In fact, the oldest known Corinthian capital was found in Bassae, dated at 427 B.C.E. It is sometimes called the feminine order because it is on the top level of the Colosseum and holding up the least weight, and also has the slenderest ratio of thickness to height. Height to width ratio is about 10:1.

The Composite order draws its name from the capital being a composite of the Ionic and Corinthian capitals. The acanthus of the Corinthian column already has a scroll-like element, so the distinction is sometimes subtle. Generally the Composite is similar to the Corinthian in proportion and employment, often in the upper tiers of colonnades. Height to width ratio is about 11:1 or 12:1. 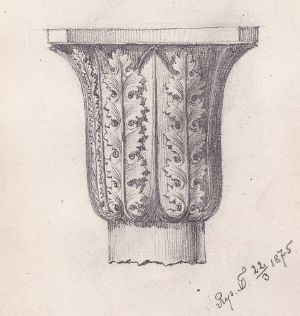 Solomonic columns were inventions of Baroque architects in Europe. They were not used in antiquity, but were called “Solomonic” by baroque architects because they were based on a description of columns in the great temple of King Solomon in the Old Testament. A Solomonic column begins on a base and ends in a capital, just like a classical column, but the shaft twists around the usual parameters of a column, producing a dramatic, serpentine effect of movement. The most famous use of Solomonic columns is in the baldocchino designed by Bernini for Saint Peter’s Basilica in the Vatican City.