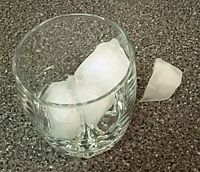 These ice cubes, having been placed in a glass above their melting point, are beginning to melt

The melting or freezing of a substance is known as a phase change or phase transition. Chemically, the substance remains the same, but its physical state (or "phase") changes. Unlike the boiling point of a substance, its melting point is relatively insensitive to pressure.

Our knowledge of melting and freezing can be applied in various ways. For instance, the purity of many solid compounds can be determined by checking their melting points. Also, freezing is a familiar method of preserving food. Melting a solid, such as a metal or plastic piece, is an extremely valuable means of molding it into a desired shape. The preparation of alloys involves the combining of metals after they have been melted. Given a mixture of several substances in the solid state, melting is a way by which some of these substances can be separated from others (with higher melting points). Materials with high melting points are valuable for making products that need to resist high heat.

Some substances, by contrast, possess differing solid-liquid transition temperatures. For example, agar melts at 85 °C (185 °F) and solidifies from 32 °C to 40 °C (89.6 °F to 104 °F)—this process is known as "hysteresis." Certain materials, such as glass, may harden without crystallizing; these are called "amorphous" solids.

Also, if a substance is rapidly cooled by sudden exposure to cryogenic (extremely low) temperatures, it will freeze below its melting point. This process is known as "flash freezing."

If a solid substance is heated, its temperature will rise until it reaches its melting point. If additional heat is supplied, the substance starts melting, and the temperature remains the same until the material is entirely melted.

The amount of heat absorbed by 1 gram of a substance at its melting point when changing from the solid state to the liquid state is called the latent heat of fusion or the enthalpy of fusion (symbol:

). For example, the latent heat of fusion of ice is approximately 80 calories per gram. This means that 1 gram of ice at its melting temperature (0 °C) will absorb 80 calories of heat before it melts completely.

For the reverse process, when 1 gram of the same substance in the liquid state is frozen to its solid state, it releases the same amount of heat.

Other meanings of melting and freezing