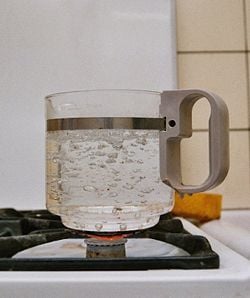 Boiling is the process of rapidly converting a liquid to its gaseous (vapor) state, typically by heating the liquid to a temperature called its boiling point. The boiling of a substance is known as a phase change or phase transition. Chemically, the substance remains the same, but its physical state (or "phase") changes.

Any change of state from a liquid to a gas is considered vaporization. If this change of state takes place below the boiling point of the liquid, it is called evaporation. Evaporation, however, is a surface phenomenon in which only those molecules located near the gas/liquid interface can evaporate. Boiling, on the other hand, is a bulk process, which means that at the boiling point, molecules anywhere in the liquid may be vaporized, resulting in the formation of bubbles of vapor throughout the liquid.[1]

The production of vapor requires energy and thus does not occur without some source of energy. This source can be a hot surface or even the liquid itself.

Understanding boiling on a molecular level

The molecules within a liquid interact with one another with various attractive forces, including what are called hydrogen bonds and dipole-dipole attractions. The boiling point represents the temperature at which the liquid molecules possess enough heat energy to overcome the various intermolecular attractions that bind the molecules into the liquid. Therefore the boiling point is also an indicator of the strength of these attractive forces.

Boiling points of water and some elements

The element with the lowest boiling point is helium. Both the boiling points of rhenium and tungsten exceed 5,000 Kelvin (K) at standard pressure. Due to the experimental difficulty of precisely measuring extreme temperatures without bias, there is some discrepancy in the literature as to whether tungsten or rhenium has the higher boiling point.

A saturated liquid or saturated vapor contains as much thermal energy as it can without boiling or condensing.

In physics, superheating (sometimes referred to as boiling retardation, boiling delay, or defervescence) is the phenomenon in which a liquid is heated to a temperature higher than its standard boiling point, without actually boiling. This can be caused by rapidly heating a homogeneous substance while leaving it undisturbed (so as to avoid the introduction of bubbles at nucleation sites).

Because a superheated fluid is the result of artificial circumstances, it is metastable, and is disrupted as soon as the circumstances abate, leading to the liquid boiling very suddenly and violently (a steam explosion). Superheating is sometimes a concern with microwave ovens, some of which can quickly heat water without physical disturbance. A person agitating a container full of superheated water by attempting to remove it from a microwave could easily be scalded.

Superheating is common when a person puts an undisturbed cup of water into the microwave and heats it. Once finished, the water appears to have not come to a boil. Once the water is disturbed, it violently comes to a boil. This can be simply from contact with the cup, or the addition of substances like instant coffee or sugar, which could result in hot scalding water shooting out. The chance of superheating is more common with smooth containers, such as brand-new glassware that lacks any scratches (scratches can house small pockets of air, which can serve as a nucleation point.

There have been some injuries by superheating water, such as when a person makes instant coffee and adds the coffee to the superheated water. This sometimes results in an "explosion" of bubbles. There are some ways to prevent superheating in your microwave, such as putting a popsicle stick in the glass, or having a scratched container to cook the water in.

Boiling-point elevation is a colligative property that states that a solution will have a higher boiling point than that of a pure solvent. Based on this knowledge, it is often thought that the addition of salt to water when cooking food will significantly elevate the boiling point of the water. That view, however, is mistaken. The amount of salt added when cooking is generally not enough to raise the temperature by a single degree. The salt is added simply to season the food and prevent pasta from sticking.

Milk and water with starch content does not boil over because of superheating, but because of extreme foam build up. This foam is stabilized by special substances in the liquids and therefore does not burst.

In cookery, boiling is cooking food in boiling water, or other water-based liquid such as stock or milk. Simmering is gentle boiling, while in poaching the cooking liquid moves but scarcely bubbles.

In places where the available water supply is contaminated with disease-causing bacteria, boiling water and allowing it to cool before drinking it is a valuable health measure. Boiling water for a few minutes kills most bacteria, amoebas, and other microbial pathogens. It thus can help prevent cholera, dysentery, and other diseases caused by microorganisms.

Foods suitable for boiling include:

Retrieved from https://www.newworldencyclopedia.org/p/index.php?title=Boiling&oldid=1095034
Categories:
Hidden category:
This page was last edited on 12 January 2023, at 00:04.
Content is available under Creative Commons Attribution/Share-Alike License; additional terms may apply. See Terms of Use for details.