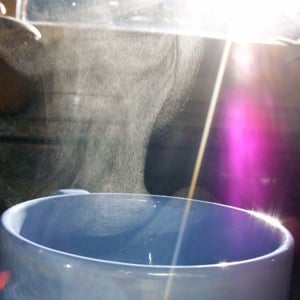 Water condenses into visible droplets after evaporating from a cup of hot tea.

Condensation is the change in phase of a substance from a gas (or vapor) to a liquid.[1] It occurs when a vapor is cooled or compressed or subjected to both cooling and compression.[2] Liquid that is formed by condensation of a vapor is called the condensate.

The phenomenon of condensation occurs regularly in nature. For example, clouds are formed by the condensation of water vapor in the atmosphere. Thus, condensation is an important process in the hydrologic cycle (water cycle). Also, the water seen on the outside of a cold glass on a hot day is condensation. In fundamental research and industrial processes, condensation is used in conjunction with distillation, as a means of separating a substance from a mixture.

Condensation of water in nature 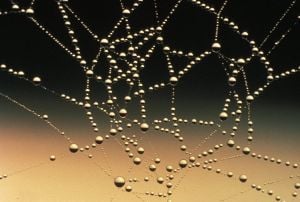 Dew on a spider web.

When water vapor from the air naturally condenses on cold surfaces into liquid water, it is called dew. Condensation of water vapor within the atmosphere produces clouds.

Water vapor will only condense onto another surface when that surface is cooler than the temperature of the water vapor, or when the saturation humidity of the vapor in the air has been exceeded. When water vapor condenses onto a surface, the water releases some heat onto the surface, which becomes slightly warmer. At the same time, the temperature of the atmosphere drops very slightly. 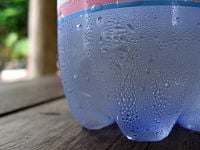 Condensation on a cold bottle of water.

Condensation is the most common form of dampness encountered in buildings. In buildings, the internal air can have a high level of relative humidity due to the occupants' activities such as cooking, drying clothes, and even breathing. When this air comes into contact with cold surfaces such as windows and cold walls it can condense, causing dampness.[3]

Condensation is an important component of distillation, which is a means of separating a substance from a mixture, both in the research laboratory and industrial settings. A device used to condense vapors is called a condenser. Condensers are used in heat exchangers of various designs and come in many sizes, ranging from small (hand-held) units to very large systems.

Because condensation is a naturally occurring phenomenon, it can often be used to generate large quantities of water for human use. Many structures—such as fog fences, air wells, and dew ponds—are made solely for the purpose of collecting water from condensation. Such systems can be used to retain soil moisture in areas where active desertification is occurring. Some organizations provide education programs about water condensers in efforts to effectively aid such areas.[4]